77 mins Etuhu off Benjani on

90 mins Halford off (injured) Williams on

Appleton hits out at disallowed goal 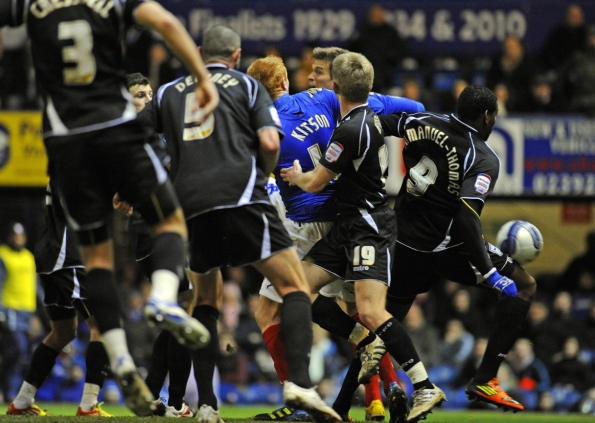 Michael Appleton criticised the decision he believes cost Pompey the chance of an Ipswich draw.

The Blues thought they had grabbed a 72nd-minute equaliser at Fratton Park last night.

That was when Greg Halford’s long throw from in front of the south stand ended up in the back of the net following a goalmouth scramble.

Referee Darren Deadman ruled there had been no touch, with the ball travelling straight into the goal.

It was a decision which left Appleton fuming – the Blues boss insisting the Tractor Boys’ Jay Emmanuel-Thomas had kneed the ball past his own keeper.

The visitors went on to collect a 1-0 victory on an emotionally-charged night on the south coast.

And Appleton was left to reflect on what he believed was a costly mistake by the Cambridgeshire official.

He said: ‘I am very disappointed with the disallowed goal.

‘I hope the referee is disappointed with the decision as well because, regardless of whether you play particularly well, sometimes you need that little bit of bravery to make the right decision at the right time.

‘I have seen a replay and basically Emmanuel-Thomas just knees the ball into his own goal.

‘I felt it was a goal right away because the ball changed angles as it has gone into the back of the net.

‘The explanation we are getting is they thought we threw the ball straight in. It wasn’t for a foul or anything like that.

‘That is disappointing because the boy knew – you could tell on his face – that he had scored an own goal.

‘But did we really do enough to win the game or get something out of it if we really look deep down at ourselves?

‘Probably not, it was a night on which it just didn’t really happen.’

Overall, it was a below-par performance from Pompey.

Michael Chopra gave Paul Jewell’s men a 13th-minute lead – and they never looked like surrendering it.

For Appleton, it was a surprise display from his side, which belied their recent good performances.

He added: ‘From a performance point of view, I don’t know whether that was down to two tough away games.

‘I didn’t see the first-half display coming, I have got to be honest.

‘In the second half I was much happier with the performance, we played on the front foot.

‘Although, we tried to play the ball forward a little bit quicker than we would have liked because they pressed the life out of us.

‘So we had to try to get in behind their midfield players.

‘I said to them at half-time, a few of them looked as though they were playing with a little bit of fear.

‘I don’t know if it was the occasion, but then I got a response from them in the second half and was happy with that.

‘They tried ever so hard to get back into the game.’

The Tractor Boys’ 13th-minute strike did the damage at Fratton Park as the visitors collected a 1-0 win.

That meant the result echoed the Blues’ off-the-field problems after they applied to go into administration yesterday.

Both sides had plenty of chances to score in front of a crowd of 14,330.

Pompey will look to ref Darren Deadman for not giving a second-half goal, as he decided Greg Halford’s long throw went in without getting a touch from one of the cluster of bodies in front of Ipswich keeper Arran Lee-Barrett.

Marko Futacs had a chance after 25 minutes which was deflected over, and Dave Kitson skewed a shot wide when well placed after 65 minutes.

But the visitors had opportunities to kill the game off, too, with the lively Lee Martin hitting the post and firing over from a few yards.

The Pompey fans showed their fighting spirit with chants of ‘we’re not gonna die’ ringing around the stadium long after the final whistle.

PAUL Jewell might be savouring three consecutive wins for the first time this season.

But the Town boss still spared a thought for the supporters of Portsmouth who raised the Fratton Park roof before, during and after their side’s 1-0 defeat to Ipswich on Tuesday night.

The South Coast club are due to go into administration by the end of the week – with a points deduction that could see them plunge into the bottom three.

But following a call to arms by the club, fans voiced their support during Tuesday’s defeat and remained singing in the ground for an hour after Michael Chopra’s winner.

Speaking after the impressive Town performance, Jewell said of the Pompey fans: “Supporters are the heartbeat of football clubs and they were brilliant. The players are out there applauding them and I’ll probably go out and join them.

“Football clubs are about fans, sometimes they get a raw deal and Portsmouth fans have probably had more of a raw deal than most over the last few years.”

And the noise from the terraces certainly transferred itself onto the pitch as Town attacker Lee Martin explained: “There was a stage when we couldn’t hear anything on the pitch, in the middle of the second half. The atmosphere was brilliant. But we rose above it and came away with the win.”

Portsmouth prepare to entertain Ipswich Town at Fratton Park on Tuesday evening, needing to improve on a poor record between the sides. The visitors have won 9 of the 19 previous games, with the Pompey winning just 3.

The most recent encounter between these two sides at Fratton Park was just last season, in September 2010, when they played out a goalless draw in a Championship match.Recent encounters between the teams

For a detailed analysis of the complete head-to-head record between the two sides, click here

Portsmouth have been playing quite well at home, winning 3, drawing 2, and losing just 1. A total of 9 goals have been scored by the Pompey in those games, with 4 conceded.

The away form of Ipswich Town is pretty dire, accumulating just 1 victory and 1 draw from their last six played. While the Tractor Boys have hit 7 goals, 12 have hit the back of the wrong net.

Portsmouth find themselves struggling down in 17th position in the league having picked up 35 points from their 29 matches.

Ipswich Town are currently lying in 19th place in npower Championship having mustered a points tally of 34 from their 29 matches played.

For a detailed analysis of current team form guides in this or any division, click here

Both teams are displaying reasonable form at the moment, and for that reason, the Madmen predict the game will end in stalemate. No-score draw

Not won in the 2 most recent games.

6 games since last away draw.