Pompey were unchanged for 3rd match in a row

Match Report from the News by Jordan Cross 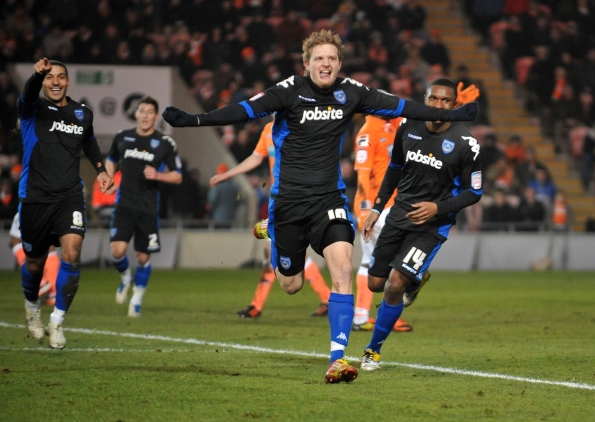 It could and perhaps should have been an against-the-odds victory for Michael Appleton’s battlers against the in-form side, though.

There were chances for the visitors to inflict a first defeat of 2012 on the Tangerines.

Huseklepp went clear after 29 minutes but was foiled by Matthew Gilks.

The Norwegian then opened the scoring just before the interval, but could have had a second six minutes after the restart.

Another chance went begging after 64 minutes, when he failed to get enough purchase on his shot after bursting through.

That meant Pompey had to settle for a point - but that didn’t silence the Blues’ outstanding fans.

They were at their resilient best throughout and undertook a ‘protest Poznan’ in the second half.

The fans turned their back on play for two minutes and sung ‘Michael Appleton’s blue and white army’ in an effort to show unity and highlight the club’s woes in the Sky-televised clash.

Defender Tal Ben Haim and strikers Benjani and Dave Kitson are all doubts for Portsmouth with hamstring injuries. Midfielder David Norris is still recovering from a hernia operation, while Luke Varney remains sidelined with a knee ligament injury.

• Blackpool are chasing a 25th win from their 65th league and cup meeting with Portsmouth, who have prevailed on 19 occasions, with 21 drawn.

• Portsmouth are unbeaten in 11 competitive matches against the Seasiders, and are looking for a fifth successive victory over them.

• It's 39 years since Blackpool last defeated Pompey, by virtue of a 5-0 triumph in the old Second Division in November 1973. Another three goals would take their total against Pompey to 100.

• The fifth-placed Seasiders, who claimed their place in the last 16 of the FA Cup midweek, are one of three clubs still unbeaten in the Championship in 2012, and on the longest current winning sequence in the division of three games.

• Ian Holloway's side have not lost in seven Championship matches at Bloomfield Road, and are chasing a fourth consecutive home league win.

• Tuesday's loss away to Birmingham was Portsmouth's third defeat in four league outings.

• Michael Appleton's 17th placed side have won just two of the last nine in league and cup.

• Pompey have only beaten Burnley and Peterborough on their travels, but victory over Blackpool could complete the first of a possible seven league doubles.

Match Preview From The Pompey Pages

A fourth successive away trip will see Pompey travel up to Blackpool this afternoon looking for another three points. The Blues will face a tough test against Blackpool, who were only relegated from the Premier League last season.

The Blues were expected to welcome back David Norris after serving his three match ban, however, the midfielder still hasn’t recovered from the hernia operation he recently took whilst serving the time out.

Trio Tal Ben-Haim, Dave Kitson, and Benjani are expected to miss out through hamstring injuries, however Ben-Haim will be handed a late fitness test to assess his progress. Sam Magri is expected to travel with the squad yet again, so fingers crossed he gets an opportunity, however Adam Webster is struggling with an infected toe.

Pompey could also welcome back Aaron Mokoena after recovering from his respective injury.

Blackpool only have one absentee, in the form of Keith Southern, who recently picked up an ankle injury.

Roman Bednar returns after missing out in Blackpool’s FA Cup thrashing of Sheffield Wednesday, whilst Bednar was also linked with a move to Fratton Park before moving to Bloomfield Road.

Pompey will have to be awake at all times to stop Blackpool’s familiar but deadly strikeforce combination of Pompey legend Lomana Tresor Lua Lua and scummer Kevin Phillips.

Pompey provided a shock result at Fratton Park against Blackpool earlier in the season when Erik Huseklepp’s injury time volley sealed a 1-0 win.

Pompey’s last trip to Bloomfield Road was back in 1992 when goals from Colin Clarke, Shaun Murray and a brace from Alan McLoughlin sealed a 4-0 away win – we could only dream of a repeat of that display today!

The Blues haven’t lost away at Blackpool in their last four trips there.

Pompey go in to the game in 17th, whilst three points would mean everything to the club who are on the brink of going in to administration yet again! Blackpool are currently in the play-off places on 48 points in fifth and closing in on our south-coast rivals!

POMPEY fans are set to show unity and perform a two-minute protest during today’s match away to Blackpool.

A rallying call was issued last night calling for fans to turn away from the action and spend two minutes clapping and chanting ‘Appleton’s Blue and White Army’.

Tom Dearie, vice-chairman of the Pompey’s Supporters’ Trust, said fans need to ‘stand up and fight for the club’ as Pompey could face another administration.

He said: ‘It was formed by a culmination of people and there have been a few ideas around in the past couple of days.

‘We have got to start somewhere. Hopefully this will have a snowball effect and those that can’t make it may see it, and something similar might happen on Tuesday.

‘We cannot let this happen again. With all the work the MPs and Supporters Direct are doing, the issue is being raised nationally. It’s the Football League and the authorities that need to see this.’

Mr Dearie added he had contacted Pompey players on Twitter to make them aware of the planned action.

He added: ‘This is nothing to do with the players. I wanted them to know it’s not against them, we all support them.’