Halford and Allan came in for Kitson and Huseklepp

Pompey largely dominated the first half.

Controversy right on half-time as definite penalty for handball against Leeds not given by referee.   It looked as blatant a handball as you'll ever see.

Referee escorted off at half-time as the crowd go wild.

Henderson makes 2 great saves at start of second half to keep Pompey in the game. Leeds on top now.  66 mins Thorne nearly scores but Lonergan saves.

75 mins Allan and Futacs replaced by Benjani and Norris 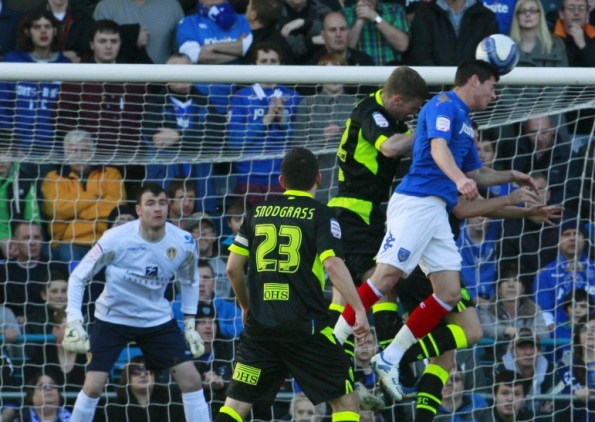 Joel Ward has a header on target during the 0-0 draw with Leeds Picture: Barry Zee

Pompey were held to a 0-0 draw by Leeds at Fratton Park.

But the Blues will feel a blatant first-half penalty not being given cost them the chance of three precious survival points.

Darren O’Dea’s clear handball in the box was not given by referee Phil Gibbs.

That was crucial, but the good news was Peterborough’s late equaliser against Doncaster kept Pompey off the bottom of the table.

There were plenty of chances for Pompey, with Hayden Mullins twice going close in the first half.

Joel Ward had a couple of headers which were saved by Andy Lonergan.

Both teams had the ball in the back of the net in the second half, but Robert Snodgrass was offside as he headed home and Greg Halford’s throw went directly into the net with nobody touching it.

New-boy Scott Allan was lively but went out of the game as the match wore on.

The result leaves Pompey one off the bottom of the table on 26 points.

But they are now five points from safety with 14 games to go.

Michael Appleton was adamant Pompey were denied a nailed-on penalty which could have proved key against Leeds today.

But the Blues boss warned his men they couldn’t linger on the decision after being held to a 0-0 draw at Fratton Park.

Darren O’Dea clearly handled the ball in the box before the break, but referee Phil Gibbs waved play on.

Appleton explained replays confirmed it was a spot kick.

He stated his men have to move on from that quickly though, with the Blues now entering the defining period of their season.

Pompey currently sit one off the bottom of the table - and five points from safey.

Appleton said: ‘I felt it was a blatant penalty and looking back at it told me what I thought was right.

‘The attitude was right and we deserved to be ahead at half-time.

‘Apart from a three or four minute spell in the second-half I thought we were reasonably comfortable.

‘But we’ve got to move on quickly now.

‘Next week is the start of eight crucial games in a month. There’s a lot of points to play for.’

Match report from the Pompey Pages

This fixture seemed to take an age to come around, an intense week of ticket pushing with players manning the offices and even fans buying tickets for those who couldn’t afford them. So by the time the players began to arrive, a real verve was building around our famous old home.

Siege Mentality – The line of the day. It started outside the ground, flowed through the terraces and every single warrior in Blue seemed to feel it too.

Pompey began brightly, passing the ball around nicely on an excellent surface, with the sunlight beaming onto the Park. The Fratton End was orchestrating arguably the best atmosphere of the season, and the other stands were duly obliging. The usually fervent Leeds contingent were struggling to make themselves heard. Pompey looked particularly dangerous from set pieces with Greg Halford’s long throw particularly dangerous (More on this later!).

Joel Ward was the first to test Lonegran, flicking on a Halford throw in, the Leeds stopper holding comfortably to his right. Mullins then worked Lonegran again, this time the keeper forced to conceed a corner, and Pompey began to sense a goal.

The game started to become a scrappy affair, referee Mr Gibbs not really allowing any flow in the centre of the field blowing up often, but also missing by all accounts some clear decisions both ways. The first half started to become scrappy with half chances for both sides and penalty box scrambles, nobody quite able to connect with a clean finish to break the deadlock. Pompey were the better side in the first half but Leeds somewhat predictably looked dangerous on the counter.

As the half-time whistle was approaching, and with another of Halford’s javelin style throws, a clear handball was missed. The word ‘Handball’ was said by so many at once that I was convinced I would find it trending on Twitter, but despite the majority of 17,500 fans spotting the offence, the referee and linesman failed to award the penalty. The half-time whistle blew and Mr Gibbs left the field under intense questioning from the Pompey players and a ‘tasty’ reception from the Fratton Faithful.

The second half began and it felt like we’d never been in the dressing room, a flurry of activity for Pompey with throws and corners causing problems for the Leeds defence but again no telling moments of real opportunity. Minutes later Leeds had the ball in the Pompey net, Snodgrass nodding in after Henderson’s cross back was rattled. This time the linesman on the near side spotted Snodgrass offside, and the deadlock continued.

Scott Allan was impressing mightily on his debut with pace, skill and plenty of determination. He forced Lonegran into a smart stop as the game began to ebb and flow. Henderson got down superbly to save from Becchio and Bromby who on two separate occasions found themselves in clear space, as Leeds began to push Pompey back.

With about 20 minutes remaining Lonegran pulled off the save of the day and perhaps gave an indication it might not be Pompey’s day, he was at full stretch to keep out Thorne’s fierce rising drive, from 18-yards out.

Back to Halford’s long throw (told you!) for the second time in two home games he found the back of the net directly from a long throw, cruelly we were allowed to celebrate just long enough to think we might be taking all three points, but by all accounts he had given the right decision.

Former Pompey middleman, Michael Brown, had the final chance of the day, firing over from 20 yards as the game ended goalless. A real decent effort by everyone involved with Pompey, and encouraging to see David Norris back and seemingly with no reaction to his injury. With another home game next week against Middlesbrough, there were positive signs that we can get the results needed to stay in the division.

Moment of the Day – the ground rising in unison with chants of “We Will Never Die”. As I stood amongst raised arms, hoarse voices, red raw hands and pure passion, I felt that Pompey could never die, so strong was the spirit and willingness to battle against all adversery, as Alan Ball so brilliantly put it “It’s a tough, street fighting city. They send people to war from Portsmouth”

Pompey Pages Man of the Match – Scott Allan. Looked very sharp, could make things happen and certainly had a goal in him, seemed to fit into the game straight away and didn’t find himself lost amongst new team-mates. Slightly dissapointed to see him substituted, but with a key game next week and his lack of recent playing time, Appleton clearly had a plan for him. A mention will go out to Greg Halford and Joel Ward for solid displays, whilst Jason Pearce and Ricardo Rocha acted with the usual commitment.

Prior to Match Preview from the Pompey Pages

Pompey are back at Fratton Park and looking to bounce back from two successive defeats, most recently the brave defeat against Barnsley at Oakwell. Michael Appleton’s men will be desperate to end a four game winless streak to ease their relegation fears. Neil Warnock will take charge of his United side for the first time, and will be buoyed by a second-half comeback last time out at home to Doncaster Rovers.

Pompey have been left severely depleted as Liam Lawrence (Hamstring) and Dave Kitson (Suspension) join Kevin Etuhu and Luke Varney on the list of confirmed absentees.

However, long-term absentee David Norris could be thrown in to the frame if he passes a late fitness test. Norris was suspended for three games and took the time out to get a much-needed hernia operation but could make his return against Leeds.

New West Brom loanee, Scott Allan, will go straight into Saturday’s squad as a replacement for the Birmingham-bound Erik Huseklepp.

Greg Halford will face a race to make the game, after failing a late fitness test at Oakwell last weekend.

Numerous other players carry slight knocks but with a lack of reserve options, boss Michael Appleton will hope to have nursed them through the week, whilst academy duo Adam Webster and Ashley Harris are both in the squad.

New United manager Warnock has a full squad to choose from but will be without Andros Townsend who this week cut short his loan spell to return to Tottenham.

HistoryToday’s visitors have the upper hand in the league, succeeding 21 times whilst Pompey have overturned Leeds 15 times, with another 15 games ending with spoils shared.

Pompey put on a battling performance in a narrow defeat at Elland Road back in October, with Danny Pugh’s goal the difference. Both games in the 2010/11 season ended in draws, notably a 3-3 thriller at Elland Road with Pompey old boy Andy O’Brien netting a last minute own goal.

Despite Leeds’ success over Pompey in the league overall, they haven’t won at Fratton Park in a league game since 1990, back in the old Division 2. Blues fans will have happy memories of November 2003 when a Gary O’Neill inspired performance led to a 6-1 demolition in the Premier League.

Leeds currently sit 10th in the Championship table, with 48 points and a four-goal positive goal difference. Points docked from Pompey mean that they’ve dropped into the bottom three after the defeat at Oakwell, sitting in 22nd place and three points behind Steve Cotterill’s Nottingham Forest, albeit with a much healthier goal difference than the other sides battling relegation.

Reply Pompeyexile
6:47 AM on February 25, 2012
A draw would be the most I could expect today..
Copyright sensolve.com 2015 Emails: [email protected]