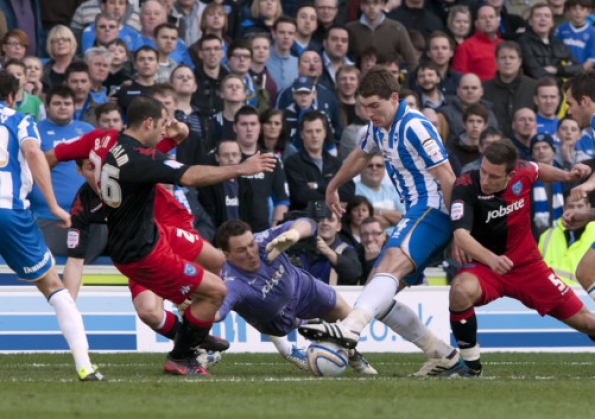 The substitute made the difference as the Blues went down to a 2-0 loss on their first visit to the Amex Stadium.

It was made all the more frustrating with the free-kick for the game’s decisive moment being disputed.

David Norris was left fuming when ref Mike Dean decided he’d brought down the Spaniard, who then fired a low drive past Jamie Ashdown.

Pompey withstood an early Brighton barrage but settled into the game as it wore on.

Scott Allan could have given the visitors the lead five minutes before the break when he lobbed narrowly over following Peter Brezovan’s poor clearance.

It looked like Pompey would pick up a plucky survival point - but that all changed with Vicente’s entrance changing the game.

The result gives Pompey a mountain to climb with 11 games left of the season.

The Blues are now eight points from Championships safety and rooted to the bottom of the table.

This is all getting too predictable. Once again Pompey turned up, played quite well, missed a chance or two and, eventually, let in goals that left them empty-handed and marooned at the bottom of the table.

And not for the first time Michael Appleton's men were left to rue contentious refereeing decisions - one of which was the award of the free-kick from which Vicente gave the Seagulls the lead. He rubbed salt into the wounds by adding a second in injury time.

The performance of the fans was again a highlight for Pompey but that won't get them out of relegation trouble - only four points or better from next week's two home games will restore the belief that they can survive in the Championship - though they will have to do it without Stephen Henderson, who is joining West Ham on loan for the rest of the campaign.

Another difficult game in the fight for survival. (article by Jim Bonner)

Pompey fans will make their first ever trip to the Amex Stadium tomorrow looking for a result to take their team off the bottom of the Championship table.

Tal Ben-Haim may return to the starting eleven if he has fully recovered from the virus that kept him out of Tuesday's defeat to Reading. Kelvin Etuhu is also pushing for a start after he was placed on the bench midweek.

Joe Mattock and Abdul Razak are set to face the club they were loaned to earlier in the season whilst Sam Vokes, another player Pompey were after may start after scoring in Tuesday's 2-2 draw with Cardiff.

Things may look dire off the pitch but that has now translated to problems on the pitch as Portsmouth lie bottom of the table and are having serious trouble scoring goals.

It speaks volumes when League One Stevenage went to Tottenham on Wednesday and had more shots on target in that match than Pompey have mustered in their last four games.

Michael Appleton has shown his players a DVD of Pedro Mendes' last-gasp volley against Manchester City six years ago this weekend in hopes that it will inspire them to produce a "great escape" of their own.

The manager has earned many plaudits for handling such a woeful situation with such dignity but he needs to change something as the useless "hoof and hope" football isn't working.

But what can he do? The man needs to work miracles if we're to get out of this mess and it doesn't help when the fixture list keeps throwing extremely tough games at him.

If the form team in the country on Tuesday wasn't enough, Pompey now have to go to Brighton who are on the cusp of the play-off places and have had a fine first season back in the second tier.

This match will have to go a long way to be as bad as last season's visit to Brighton but I don't hold out too much hope. If only someone could conjure up something from somewhere just as they did six years ago...

After trudging through an alley full of potholes and dog shit to get to the embarrassingly bad Withdean Stadium, Pompey fans had their days made worse as Dave Kitson was sent off for punching Adam El-Abd in the box.

Chris Wood gave the Seagulls the lead and then Ibrahima Sonko needlessly handled the ball in the box in the last minute of the half, meaning Ashley Barnes could score the penalty.

Tom Kilbey scored in stoppage time of the second half to give us a glimmer of hope but Brighton went straight up the other end of the pitch and scored through Francisco Sandanza to see the League One side through.

Whilst it can't be as bad as the match above, I can't see Pompey getting anything here unless there is a "Mendes moment".

Brighton are still without Gary Dicker, who is not yet ready to return from five months out with a broken leg.

Tal Ben-Haim faces a late fitness test for Pompey after missing the defeat at Reading with a virus but Kanu and Benjani look set to miss out again.

Winger Kelvin Etuhu could be in the starting line-up after being on the bench in midweek.

• In the overall standings Brighton lead Portsmouth by 17 wins to 15 from 42 engagements. Of those 35 have been league games, in which Pompey have won 13 and lost 12.

• The Seagulls are vying for a third successive win over Portsmouth in league and cup, and their first league double over them since 1922, when they won both fixtures on Christmas Day and Boxing Day with a 9-2 aggregate score.

• Portsmouth's last victory on Brighton turf was on 31 March 1986, by the odd goal in five.

Use accessible player and disable flyout menus • Wednesday's 2-2 home draw with Cardiff took Brighton's unbeaten league sequence to 11 games, and means that only goal difference is keeping them out of the play-offs.

• The Seagulls remain the only undefeated club in the Championship in 2012. They have won six and drawn five league games since ending the last calendar year on a four-match losing streak.

• All but two of their nine home league victories have been against bottom 10 clubs.

• The beleaguered south coast club are bottom of the table, six points from safety and without a win in seven games. They have lost the last two, picked up two points out of 21, and scored just two goals since beating Peterborough on 28 January.

• Portsmouth will be making a third attempt to recapture the 2,000 all-time second level league points they had on 2 January, before the 10-point deduction for entering into administration.

• Pompey have lost 12 Championship games by a single goal this season; only Coventry beat that with 13 defeats by the slenderest margin.