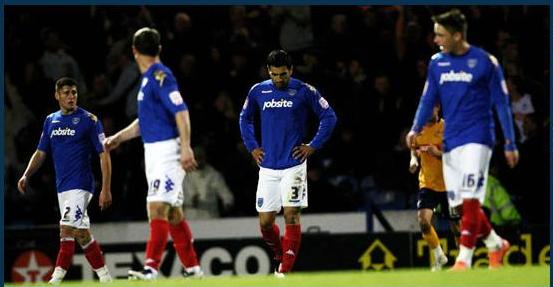 PHOTO: Pompey players dejected after Millwall score to make it 1-0 to the visitors

Pompey were unchanged from Saturday's last-ditch draw with Southampton. Benjani on the bench in place of Kitson. a do or die game tonight. Pompey really needed 5 wins from the remaining 5 games to have a realistic chance of staying up.

Pompey staring at relegation after defeat by Millwall 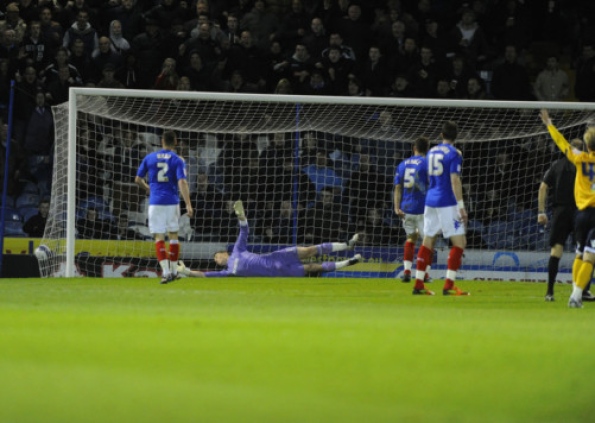 Pompey are staring into the League One abyss after defeat to Millwall.

Harry Kane’s 37th-minute strike gave the Lions a 1-0 win on a painful night at Fratton Park.

That leaves Michael Appleton’s men nine points from safety and needing a miracle to remain in the Championship with four games remaining.

Pompey can now be condemned to League One at Doncaster on Saturday if results don’t go their way.

The reality was Pompey looked increasingly edgy and short on ideas after a high-tempo start failed to yield a return.

The decisive moment arrived eight minutes before the break when Kane turned and fired home from the edge of the box.

Fratton was ready for a second-half onslaught, but it never arrived as Appleton’s side became more and more edgy.

Then Chris Maguire had a half-decent appeal for a penalty turned down as he was challenged by Jack Smith.

But the goals didn’t arrive and Pompey now look certainties to be relegated. 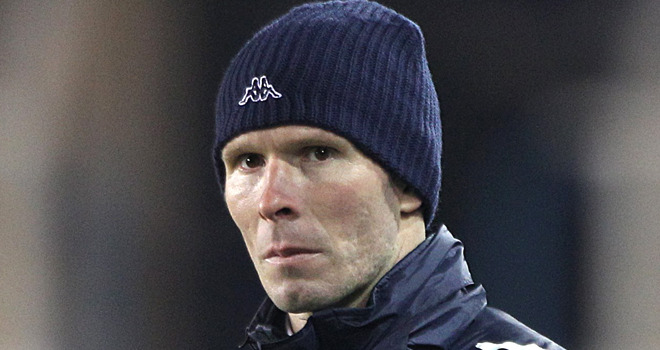 Portsmouth manager Michael Appleton conceded it is only a matter of time before the club are relegated from the Championship following defeat by Millwall.

Pompey could have moved to within seven points of the South London club with victory at Fratton Park, but instead fell nine points adrift of safety with only four games remaining.

And Appleton now fears Portsmouth are set to play in English football's third tier for the first time since 1983.

"I'm realistic enough to know that we're going to have to win four games and unless we do we're going to be looking at playing in a different division," said Appleton, whose side were beaten by Harry Kane's first-half strike.

"I'm realistic enough to know that we're going to have to win four games and unless we do we're going to be looking at playing in a different division."

Andy Keogh controlled a long ball eight minutes before the interval, twisted into space and teed up the Tottenham loanee, who stepped inside his marker and rifled a finish into the bottom-left corner from 20 yards.

A game too farIn an otherwise uninspiring affair, Pompey had plenty of territory and possession but lacked a cutting edge.

After a brave 2-2 draw at rivals Southampton on Saturday, this looked a game too far for many of the Football League's smallest squad, and provided a tame end to Pompey's survival hopes.

"We started the game really well, created a few good opportunities, got in behind them, but the first goal in football is so important and we've allowed the centre-half to lump a ball up the field and given a really poor goal away.

"You could see in the second half the confidence oozing away from the players and it wasn't nice to see given the amount of effort they've put in over the last few weeks.

"It was a difficult night, but you learn a lot about certain people tonight. There's a lot I'll learn about a few of them tonight.

Millwall assistant boss Joe Gallen was full of praise for on-loan goalscorer Kane after a tireless performance from the 18-year-old and his strike partner Andy Keogh.

"I don't want to talk him up too much because he's decent," said Gallen.

"He's a very good finisher, very good all-round game and we're thankful to Tottenham for letting us have him.

"I think he's going to score lots of goals in his future. He loves football, he loves training - he gets annoyed when we pull him away from finishing training because we're worried he's going to get a thigh strain."

Asked about a permanent move for Kane, Gallen added: "He's got the lot. We've got to try and make sure we get some points and then we can concentrate on next season. It would be great if we could.

"We're very close to staying up, but not yet there."

Appleton's pain - from the News 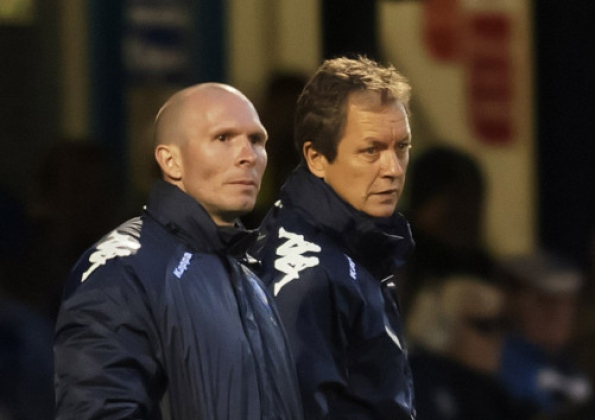 The Blues need a miracle to stay up after going down to a 1-0 loss at Fratton Park tonight.

Appleton was hugely disappointed with the ease in which the visitors grabbed the key strike from Harry Kane.

And he was admitted it was hugely disappointing to see the belief drain from his side as they tried to get back into the game.

Appleton stated that proved a revealing insight into some of his players.

He said: ‘It was disappointing.

‘We started the game really well.

‘We created a few opportunities and got in behind them.

‘But the first goal is important. We didn’t deal with the first ball and the second one. It was a poor goal to give away.

‘The confidence oozed away from the players. It wasn’t nice to see.

‘It was a difficult night. I learnt a lot about certain people tonight.’

Portsmouth are now all but relegated to League One after a 1-0 home defeat to Millwall courtesy of Harry Kane's first half goal.

The same side that earned that dramatic 2-2 draw at Southampton had played some excellent football in the first half only to fall apart when they went behind.

Despite some of the attractive passing, there was little penetration and the only real chances of note came for Chris Maguire early on when he tested Maik Taylor with a fierce strike.

Shane Lowry came closest to breaking the deadlock for Pompey as he headed Joel Ward's long cross over the bar at the far post when it easily could have gone in.

Pompey were comfortable in possession and looked like the only team in it until Millwall struck after 37 minutes. Harry Kane managed to beat Ricardo Rocha and make some space for himself before firing the ball into the bottom corner of the net.

Things went awry after that and Pompey couldn't find any tempo to their game and even when Marko Futacs was introduced for the injured Rocha, the pattern of the match didn't change.

There were far too many hopeless long balls in the second half whilst simple passes were going astray. Andy Keogh should have scored another for the Lions but decided to dither and give the Pompey players time to get back.

Not that it mattered as the hosts created little in a frustrating second half with Taylor only being worked by Futacs' volley which he really should have done better with and a header from Luke Varney.

Jack Smith took David Norris out in the box late on but Mark Halsey waved away the penalty appeals to highlight what was a dreadful night for Portsmouth.

The final whistle blew and Halsey effectively called time on Pompey's survival hopes. I call myself an optimist but even I am planning my trips to Yeovil and Hartlepool next season.

It's more likely that Saints will win the Premier League next season than us survive in the Championship this season. In fact, should we lose to Doncaster and Bristol City get a result at Birmingham or if we can only draw and the Robins take all three points at St. Andrew's then our relegation will be confirmed.

But that isn't our biggest concern. League One football is the best case scenario for us come August but there is still the very real threat of Portsmouth Football Club being liquidated in the summer.

Jamie Ashdown: 6 - Solid enough, didn't have any real chance with the goal.

Joel Ward: 5 - Kept lumping the ball to nobody.

Ricardo Rocha: 5 - Off with an injury but got beaten for the goal.

Karim Rekik: 6 - Clearly has the ability but needs to toughen up.

Greg Halford: 5 - Barely saw him in the second half.

Kelvin Etuhu: 5 - Looked out of place.

David Norris: 5 - No impact unlike Saturday.

Millwall top scorer Darius Henderson is unlikely to play because of a calf injury so Harry Kane and Andy Keogh are expected to start in attack.

Liam Trotter (thigh) is set to miss out again while fellow midfielders Therry Racon (ankle) and Tamika Mkandawire (knee) are out for the season.

Portsmouth defender Tal Ben Haim is a doubt with a calf injury.

Defender Aaron Mokoena (ankle) and veteran striker Kanu (back) are both still ruled out.

• These clubs are meeting for the 60th time competitively. Portsmouth lead by 19 wins to 15, with 25 drawn.

• A late Dany N'Guessan goal gave Millwall a 1-0 win when these two met at the New Den in December. Another victory would give the Lions their first double over Pompey in 42 years, and only their third of all time.

• It was September 2002 when Portsmouth last registered a home victory over Millwall.

• Portsmouth may have held Southampton to a 2-2 draw last time out, but they have failed to win 12 of their last 14 league matches, and with the added handicap of a 10-point deduction, are fighting to retain their Championship status.

• It is 36 years since the Hampshire club were last relegated from the second to the third tier of English football. They last played in the old Third Division in 1982-83.

• Pompey are striving for a third win in four home league games, and have conceded a goal a game on average in their league matches at Fratton Park this season; 20 in 20.

• Millwall are still hovering about the relegation zone, despite two wins in four outings, in which just one goal was conceded.

• The Lions beat Hull 2-0 on Saturday, and are pursuing successive wins for the first time since 1 November.

• Three points would give Kenny Jackett's side a second double of the season, having already beaten Doncaster home and away.