By Neil Weld at the City Ground

Pompey said goodbye to the Championship with a two-goal defeat at Nottingham Forest.

It was clear that there was not much to play for either side in a game of very few clear-cut chances.

But Dexter Blackstock opened the scoring for Steve Cotterill’s side with a close-range finish midway through the second half.

And the Forest striker then headed home from a corner late in the game to make sure of victory.

Defeat did not seem to matter to the travelling Blue Army, however, who did not stop singing throughout.

Michael Appleton made three changes from the side that lost to Derby seven days earlier.

It was the hosts who made the brighter start, although Jamie Ashdown was not overly troubled by efforts from Dexter Blackstock and Adlene Guedioura.

Lee Camp was not looking so assured at the other end, though, spilling shots from Etuhu and Maguire.

The Forest keeper did manage to hold onto Luke Varney’s drive on 21 minutes, however, after the forward had received skipper David Norris’ pass and spun in the box.

There was a typical end-of-season feel to the game, with an unsurprising lack of urgency from both sides.

But the 2,300 Pompey fans – who arrived in an assortment of fancy dress, including Elvises, Robin Hoods and Smurfs – certainly seemed to be enjoying themselves.

And Maguire was looking lively up front, sending a dipping shot inches over the crossbar on 27 minutes.

But it was Forest who should have broken the deadlock soon after. Chris Gunter was unmarked in the box when he received a low cross from the left, only for the right-back to blaze high over the bar.

There was not too much else to get excited about in a lifeless first half, although the home defence did well to stop Etuhu meeting Scott Allan’s pass following good work down the right from the on-loan midfielder.

The second half did not exactly explode into life, but there was still a decent opportunity for Forest five minutes after the restart.

Etuhu gifted the hosts possession with some sloppy play but Blackstock could not take advantage, firing over from close range.

At the other end Maguire won a free-kick on the edge of the box and then dusted himself down to shoot inches over.

Varney then sent in a dangerous low cross from the right that Luke Chambers did well to clear to safety.

But it was Forest who broke the deadlock on 70 minutes. Greg Cunningham’s cross was headed back across goal by Garath McCleary for Blackstock to poke home from a yard out.

Blackstock really should have extended the hosts’ advantage shortly afterwards, but Ashdown kept out three of his headers in the space of 30 seconds.

But an Etuhu drive that was comfortably gathered by Camp was as close as Pompey came to levelling.

Instead Forest scored a second late on 89 minutes with Ashdown unable to keep out Blackstock’s header from an Andy Reid corner.

Match report from the News

Pompey signed off from the Championship with defeat at Nottingham Forest. 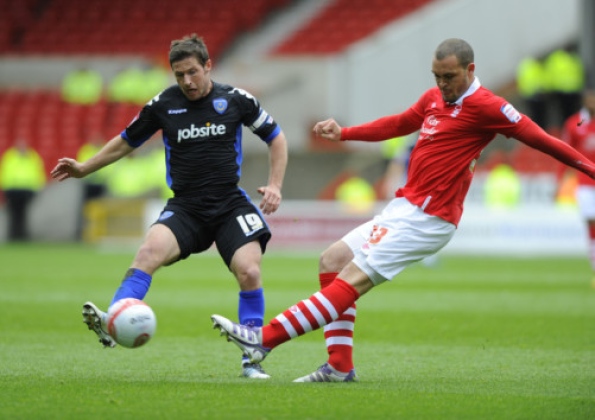 Dexter Blackstock was the difference with both second-half goals to give his side a 2-0 win at the City Ground.

But this wasn’t about the result for the 2,300 travelling Pompey fans at the game.

With many in fancy dress, the away fans had a party as they waved goodbye to the English game’s second tier.

And all players and staff gave them an emotional ovation at the full-time whistle, with shirts being thrown into the stand.

There was little action on the pitch in the first-half - with Chris Gunter blazing over the only real chance.

Forest made the breakthrough with 20 minutes left as Blackstock turned in Garath McLeary’s cross.

Jamie Ashdown made two world-class stops to deny Blackstock, before the striker’s header squirmed through Ashdown’s hands from a corner late on to settle it.

Now it’s all about the fight for the club’s survival off the pitch for Pompey - and, hopefully, a future in League One next season.

Yet another turbulent Pompey season draws to a close as they travel to Nottingham Forest’s city ground. Michael Appleton’s charges have fought bravely against relegation, and will be looking to sign off with a solid result in what will be their final Championship fixture for at least another season. Saturday’s opponents, Forest, are led by former Pompey boss Steve Cotterill, and will themselves be relieved to go into their final game with their Championship survival secured. Pompey will be backed by over 2200 fans, who have dubbed this game a ‘relegation party’ and will surely create another famous away day memory.

Chris Maguire will be available for Pompey after finding himself ineligible for the Derby defeat.

Midfielder Scott Allan will be in the squad after parent club West Bromwich Albion confirmed he would not be recalled early from his loan deal. Ashley Harris limped out of his full debut with cramp but is expected to be fit for selection.

Michael Appleton may decide to blood some youth and make some changes to freshen the team up, calling for a show of pride to end the season. Youngsters Jed Wallace, Sam Magri, Alex Grant and George Colson have travelled with the squad to senior team experience.

Pompey and Forest have met 33 times in the league, Pompey having been victorious on 13 occasions but the City Ground side hold the advantage having taken all three points 16 times.

Pompey fans will go home happy should they see a repeat of this year’s earlier fixture at Fratton Park, Erik Huseklepp’s brace sending Pompey to a 3-0 victory.

Last seasons fixtures both ended 2-1 to the homes sides respectively, Pompey plucked defeat from the jaws of victory at the City Ground after conceding two goals in the final three minutes after Kanu had sent them into the lead. A Liam Lawrence volley secured all three points for Pompey at Fratton Park

Pompey’s defeat to Derby coupled with Bristol City’s victory over Barnsley confirmed relegation for Michael Appleton’s men last weekend, they find themselves in 22nd position in the league table. Nottingham Forest have taken advantage of Pompey’s plight, finding themselves 7 points clear of the Blues. Gaffer Steve Cotterill will note that had it not been for a 10 points deduction for entering administration, they very may well have found themselves battling the drop.