Pompey turned up the heat on their relegation rivals with a convincing 2-0 win over Hull City as Chris Maguire and Joel Ward netted first-half strikes to secure three vital points.

The Blues bounced back from Saturday’s miserable 2-0 loss at Coventry with a fine display as Michael Appleton’s side showed they still have the stomach for the fight to stay in the Championship.

The on-loan Maguire opened the scoring just beyond the 20-minute mark with a sublime finish as he latched on to a long ball down the right channel and lofted a clever finish over the stranded Hull keeper Vito Mannone.

And just five minutes later, Ward was on hand to poke home from close range after George Thorne picked him out with a clever cut-back following a corner. 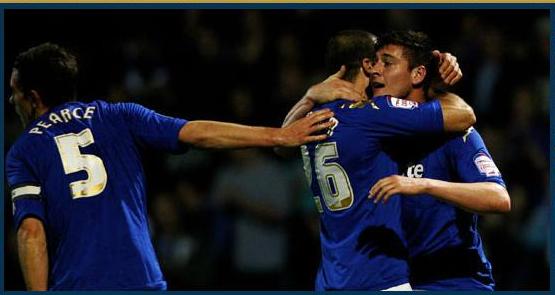 While Hull improved after the break, Pompey never looked in any real trouble as Jamie Ashdown was forced into only one real save of note in the first half.

While Pompey looked dead and buried on Saturday, suddenly they look like they have a chance of dragging themselves out of the relegation mire once again.

If the defeat against Coventry was Pompey's ejection from Last Chance Saloon, tonight's match against Hull City was the equivalent of trying to argue with the bouncer to regain access, despite falling over, slurring our words and reeking of Bourbon.

Pompey made one change to the team that had started the last 3 games, and a surprising change it was with Ricardo Rocha being replaced by the debuting Karim Rekik. The Dutch Under 17 international started at left back, with Halford moving into the centre and Ben Haim moving to his favour right back slot.

The match started rather tentatively, with neither team creating much coming forward in the opening 10 minutes, but as the half progressed the home team started to get on top, with Varney failing to convert the first real opportunity.

Pompey continued to pile on the pressure and were rewarded 20 minutes in when Scott Allen found Chris Maguire who from a tight angle fired past Vito Mannone, the first time Fratton Park had seen the Blues score a first half goal since the start of December.

After waiting 405 minutes for a first half goal, Pompey only had to wait another 4 for their next, when Allen's corner found its way Norris, who in turn put the ball on a plate for Joel Ward, who duly obliged by finding the corner and doubling Pompey's lead.

Hull weren't planning on sitting back however, and responded aggressively creating several opportunities. However Jamie Ashdown was on top form to keep out Matty Fryatt's shot, and minutes later it was debutant Karim Rekik who chipped in with a terrific block to ensure Pompey's lead was in tact as the players marched off at half-time.

The second half started equally as slowly as the first, and it was the visitors who started to look like they would find their way back into the game by keeping possession and passing the ball around well. However they failed to create any opportunities of note during this period and the momentum started to swing back in favour of the Blues.

If Hull were going to find their way back into the match it would be thanks to their keeper Mannone, who thrice thwarted Pompey within 10 minutes, with Norris, Ward and Maguire all cursing the Tiger's 'keeper.

But as the game entered its closing stages the hosts continued their dominance, with Maguire miscuing when he looked certain to score and substitute Kelvin Etuhu taking a bit too long after making an 60 yard run. This run was eclipsed minutes later by a streaker who ran the length of the pitch and then some, showing some neat footwork to evade several stewards for a good 90 seconds, eventually being reprimanded after a magnificent tackle (by the steward, not the streaker).

Maguire had one final chance to put the icing on the cake after a fine free flowing move but his shot flashed just wide of the post. As the final whistle sounded chants of 'We are staying up' reverberated around the old ground and maybe, just maybe, they have a case, especially now that we are off the bottom after Doncaster drew at Selhurst Park.

With 7 games to play, Portsmouth are just 3 points of safety and have a much superior goal difference to all those around us, and if we continue to play like we did against Hull 'The Greatest Escape' may be much more than a pipe dream. Bring on Burnley!

Maguire was given the award by the sponsors, but he was one of many on the night who deserved it. George Thorne was quality from start to finish but my choice for the accolade is 17 year old Karim Rekik who looked very comfortable at left back and will give Michael Appleton a pleasant headache when it comes to team selection on Saturday.

2 Reports from the Official site

Pompey produced one of their worst performances of the season when they lost at Coventry at the weekend.

But they followed that with one of their most impressive displays to beat Hull 2-0 at Fratton Park on Tuesday night.

The result means Pompey are now just three points adrift of safety with Burnley coming to Fratton Park on Saturday.

Maguire was impressed with how the Blues responded to their defeat at the Ricoh.

And now the Scottish striker wants to see Pompey build on back-to-back home victories to remain in the Championship.

He said: “It was important to get that win behind us after the upset at Coventry on Saturday.

“We knew that we let the manager and the supporters down at the weekend – as well as ourselves.

“So it was important that we showed everyone that we’ve still got the fighting spirit and I think we did that against Hull.

“We started well and looked good throughout the game – we were unlucky not to score even more.

“For the goal I just saw the keeper start to back-pedal and the ball sat up nicely for me. There was only one thing on my mind – to go for goal. Thankfully for myself and the team it went in.

“Hopefully I can bag a few more goals and help the team. I knew it was a tough situation when I came here, but I haven’t come here to accept defeat. I want to perform well and show everyone that I’ve got that fight in me.”

Maguire is loving life on the south coast after joining the Blues on loan from Derby, where he was not getting a look-in under Nigel Clough.

He said: “The games are coming quickly and I’m enjoying every minute of it. I’m thankful to the manager for giving me this opportunity.

“It was another 90 minutes under my belt and I’m getting stronger with every game. I hadn’t played for a while, but now I’m getting back to match fitness.

“I feel alright. I’m used to working hard. It has to start from the front and myself and Luke Varney worked hard all night. So did the rest of the team and it was a great performance. We have to keep doing that if we want to stay in this league.

“We’ll take each game as it comes, but if we keep performing like that then we won’t be too far away.”

Pompey could have scored a hatful of goals against Hull.

But the Blues had to be content with just two in a display of attacking intent that saw them climb off the bottom of the Championship table.

But the latter was also impressed with a solid display at the back that saw Michael Appleton’s men keep a clean sheet.

Jamie Ashdown had to make just one save of note as he was well protected throughout by a back four that included debutant Karim Rekik.

Pompey defended from the front, however, with the impressive Maguire showing plenty of endeavour as he tried to protect the lead – as well as increase it.

Ward said: “There’s a lot of fight in the squad and we’ve got to work hard in every game to keep our shirts.

“As a unit we defended well – from the front to the back. We stuck to our task and made it difficult for Hull. We blocked out their danger men.

“We had our game-plan and wanted to rectify things after the poor performance at Coventry on Saturday. I think we did that. We came out looking sharp and got an early lead.

“Everyone tries to prove themselves in every game and on Saturday it wasn’t a good display from us.

“But we always stick at it and we showed that we’ve still got character by putting that bad game behind us.

“We’ll take the positives from this game and have got one eye on the table, but the main focus is approaching one game at a time.

“We’re looking to make Fratton Park a fortress again. We relish the home games and hopefully we can take our form at home into our remaining away games.”

Ward was impressed with man-of-the-match Maguire’s finish and also delighted to get on the scoresheet himself.

But the midfielder also conceded that he should have scored a second when he met Scott Allan’s cut-back, but failed to beat Tigers keeper Vito Mannone from close range.

“The second chance was probably easier than the first one,” said Ward. “But I’m delighted to get a goal – it’s been a long time coming.

“Chris’ goal was a ball down the channel and a lob over the keeper – it was a striker’s finish and I’m really pleased for him."

The match was originally due to be played on February 4, but the game was called off after referee Darren Sheldrake deemed the surface to be unplayable due to freezing overnight conditions.

Tickets for the original fixture are valid for this match.