The administrator at Portsmouth has made 33 staff redundant, including the chief executive David Lampitt, and asked the players to defer their wages, in an effort to keep the financially stricken club in business. 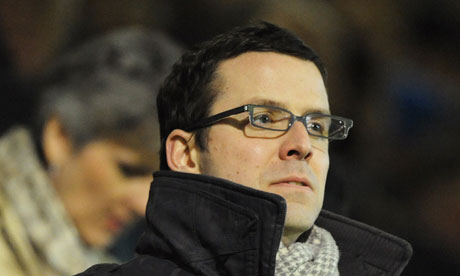 The Portsmouth chief executive, David Lampitt, said that he respects the decision to make him and other staff redundant.

Staff at all levels, from Lampitt and his two fellow directors to coaches at the club's academy, were laid off by Trevor Birch, of the accountant PKF, which described the measures as necessary "if the club is to continue to exist".

The employees were distressed and several were in tears after they were told in meetings that their jobs had been cut with immediate effect. Portsmouth fell into administration last week for the second time in two years, owing £2m in unpaid tax, after the owner who had been bankrolling the club, Vladimir Antonov, was arrested for alleged bank fraud in Lithuania.

Birch said the savings he is making, which also include asking some staff to work part-time instead of full-time, amount to approximately £400,000 a month. Describing the cuts as a "difficult decision" and "painful for everyone involved with the club", Birch said they were "essential" to ensure the club survives, even just to the end of this season.

"Our initial analysis of the club's financial position has revealed that the situation is more serious than many people had expected," he said. "As things stand, there is a serious risk that the club could run out of cash within the next couple of months."

Redundancies were expected and are routine when any business collapses into insolvency, and directors are often laid off when it becomes run by an administrator. However at Fratton Park there remains shock at its fall so soon after Antonov took over and promised to bankroll new spending. That led to what Birch described as Portsmouth having "a Premier League cost base but only Championship income".

Birch, however, is understood to be furious that £800,000 of the club's money held by the club's previous administrator, Andrew Andronikou of Hacker Young, had not been released to him. Andronikou said £600,000 has now been sent back to Portsmouth, on the day the redundancies were made.

"The balance [£200,000] has been retained to cover our fees, lawyers and counsel fees," Andronikou said, adding he would have been prepared to defer those fees had he been appointed administrator until the club was sold.

Birch said of the challenge ahead: "Portsmouth's survival depends on us being able to find a buyer for the club before the money runs out."

On Tuesday evening he held a meeting with the Pompey Supporters Trust, which has been organising and fund-raising, in partnership with some wealthy individuals, to harness a genuine effort to take over the club itself. Birch said of his contact with the supporters trust: "I am very happy to have entered into a very constructive dialogue with them."

Lampitt, the former FA head of regulation who saw Portsmouth into the Antonov takeover, said he respected the decision to make him and the other staff redundant. "The priority is for the club to survive," he said.