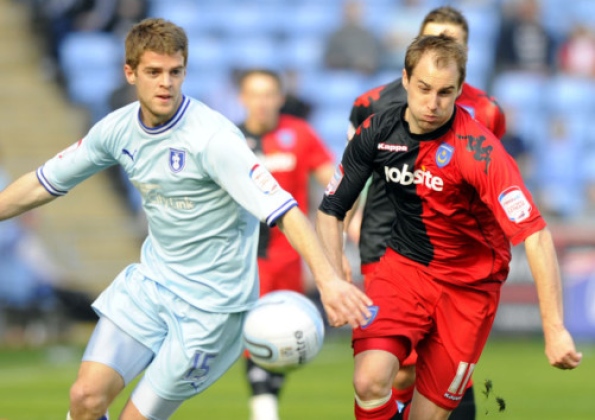 Luke Varney and Martin Crainie challenge for the ball

Pompey in red and black

Away from home, Pompey's recent form has become predictable - and so it was at Coventry as Michael Appleton's team failed to build on their midweek win over Birmingham and fell deeper into relegation trouble.

Pompey had more than their fair share of chances at the Ricoh Arena but they didn't take them - and as has so often been the case on the road this season, that proved costly as their opponents showed them how it was done.

Gary McSheffrey and Oliver Norwood grabbed the goals in the second half - the second of them certainly against the run of play - to leave Pompey still bottom of the table and with a bigger-than-ever hill to climb if they are to avoid relegation to League One. The only good news was that Bristol City, the team Pompey have to catch, surrendered a lead to draw at Middlesbrough.

Pompey were unchanged from the side who started the win over Birmingham which meant Kelvin Etuhu and new Manchester City loan pair Karim Rekik and Luca Scapuzzi all had to settle for places on the bench.

Pompey began the game five points off safety and two behind their hosts and the game began after a minute's applause for Fabrice Muamba.

The visitors began brightly and got forward for Jason Pearce to whip a dangerous ball across the face of goal.

Coventry's first threaten came in the form of a free-kick by Sammy Clingan but Jamie Ashdown pushed away the well-struck shot.

After that Pompey had the better of it for a while but a couple of promising moves were let down by the final ball.

Chris Maguire got a clean connection on a free-kick but keeper Joe Murphy saved at the second attempt.

Maguire found space for another shot which Murphy dealt with and David Norris was next to try his luck in Pompey's bright start to the game.

Gradually Coventry got a grip on the game and they looked certain to take the lead when Clive Platt beat Ricardo Rocha and closed in on Ashdown, but the keeper made a brilliant stop to keep it goalless.

Now Ashdown was much the busier of the two keepers and he was called into action a couple more times as Coventry enjoyed a spell of pressure.

Joel Ward missed a fantastic chance to head Pompey into the lead when a corner found him unmarked at the far post but he headed wide from a few yards out.

The Blues suffered a blow when Luke Varney went down with what looked like a hamstring injury. But happily he was soon back on his feet and going past his man for a shot at goal from an acute angle which was just wide.

Pompey were being roared on by a 1,000-strong army of travelling fans who were comfortably outsinging the home crowd.

Varney seemed to have been spurred into life by his brush with injury and he went close with a header from a Greg Halford cross.

It was an open game and anyone's to win as the first half drew to a close, with both teams looking threatening in short bursts.

The Sky Blues hadn't finished the first half well and made a change at the break, bringing on Conor Thomas for Gael Bigiminara.

Pompey were first to show in the seocnd period as Ward sent in a long-range shot but Murphy saved comfortably.

The second half was following a similar pattern to the first with neither side absolutely on top, but Coventry broke the deadlock just before the hour mark when Chris Hussey got forward and slid in a cross which cSheffrey put away.

Appleton's men were almost level immediately when Maguire went through and lifted a shot just over the bar.

The game had become even more open following the goal and Ashdown had to be at his best to deny Alex Nimely, whose 25-yard free-kick following a foul on him by Pearce was superbly blocked.

A minute later Nimely forced Ashdown into another sharp save with a shot on the run.

Etuhu and Marko Futacs replaced Ward and Norris as Appleton tried to engineer a rescue mission.

Pompey looked serious about salvaging a point as they pushed men forward and Maguire almost grabbed the equaliser, striking the post from a free-kick after Richard Keogh handled Allan's shot at goal.

Maguire, Etuhu and Varney all went close for Pompey - the latter missing with a header from a free-kick that found him unmarked - and he really should have put it away.

Pompey were winning more than their share of free-kicks and Maguire was taking most of them - but one, 35 yards out, proved too far and he struck his effort high and wide.

Just as Pompey were cranking up the pressure Coventry broke their hearts with a second against the run of play, with Norwood on hand to smash the ball after a quick passing move by the home side. It left Pompey with a mountain to climb.

Appleton's last throw of the dice saw Scapuzzi replace Allan but there was little time left for him to make an impression.

Pompey still pushed forward in the hope of getting back into it, but looked increasingly desperate as they did so and there was no way back and Murphy's injury-time save from Maguire, who'd again been one of Pompey's brightest performers, was the last meaningful action.

Portsmouth manager Michael Appleton is likely to include youngsters Karim Rekik and Luca Scapuzzi in his squad.

Winger Kelvin Etuhu is fit but defender Aaron Mokoena (ankle) and striker Nwankwo Kanu (back) will miss out.

• These clubs face each other in a league game for the 20th time. Coventry have won 10 of the previous 19, Portsmouth seven, with two drawn.

• Portsmouth were odd goal in three victors when they met the Sky Blues at Fratton Park in December, but they have never done the league double over the West Midlands club, and have only won two league games on Coventry turf.

• Coventry have never drawn a home league game against Pompey.

• Third bottom Coventry are three points from safety with eight to play, and on the Championship's joint longest current run of four successive draws, in company with West Ham.

• The Sky Blues have picked up 22 more points at the Ricoh Arena than they have on their travels, the widest disparity in the division.

• Andy Thorn is looking for a first win in six league games, and will be hoping to avoid the club's 500th defeat in second level league football.

• Tuesday's 4-1 home win over Birmingham, ended Portsmouth's nine-match winless sequence, but still leaves them one point adrift at the foot of the table, and five points from safety.

• Another three points will give the Fratton Park club their second back-to-back victories under Appleton, who has supervised five wins, six draws and 10 defeats in 21 Championship games in charge.

• The midweek game saw Pompey score four goals for the first time this season, but it was only the third time they had found the net in 10 outings.

What a difference a week makes in football. This time last week most of us were saying anything but 3 points against Bristol City would spell doom. Bristol City came and left after a 0-0 draw accompanied by an impressive second-half display which postponed pessimism for another 3 days.

Then along came Birmingham, who got walloped 4-1 by a Pompey team who are all of a sudden realising their dreams of "The Greatest Escape" may be slowly coming true.

Perhaps equally as importantly, the loan transfer window has now been slammed shut and both Pearce and Varney have managed to keep their place in the Portsmouth squad, in addition to a few young City boys coming in to bolster the ranks.

Up next, a crucial 6 pointer as Pompey travel to the Ricoh to try and upset the Football League's applecart and climb ever closer to safety.

Coventry Team News: A few knocks and hobbles have been shaken off after the Birmingham game, and Pompey have no new injury concerns going into the match. Perhaps more frustratingly for Appleton is that both Etuhu and Futacs scored after coming on in midweek, the former especially looking worthy of a starting place. A dilemma that isn't too familiar here, and one we welcome.

Despite being eligible, it'll be surprising to see Scapuzzi or Rekik come straight into the team, although there may be a place on the bench for one of them.

Player to watch: Chris Maguire Maguire was chosen as the one to watch on Tuesday and proved why, scoring one and setting up another, as well as being involved in the sending off. His work rate was spectacular and if he can keep it up it could be very rewarding come the end of April.

Pompey Team News: After snatching a last minute equaliser against Cardiff on Wednesday, Andy Thorn has no new concerns injury wise. It is unlikely that Pompey fans will see Hermann make an appearance having only appeared twice since moving to the club in January.

Player to watch: Martin Cranie Martin Cranie never really got a look in at Pompey, but has been one the first names in the Sky Blues' defence since moving there in 2009. He can play at right back, but will more than likely slot in at centre back and could cause trouble to the Pompey front line.

Match Facts & Stats We are all aware of Pompey's scoring woes prior to last Tuesday, but hopefully our 4 goals will encourage more balls in the onion bag. Coventry have drawn their last 4 games, and perhaps worrying for Portsmouth have secured 7 of their last 10 points with goals in stoppage time.

Match Prediction: A 6-pointer for both teams, in my opinion can only end one way, with 1 point each. Neither team will want to lose and a point isn't a bad result for us, especially with 2 home games coming up. I'll say 1-1, with a late twist.

The game between Coventry City and Portsmouth in the Championship on 24th March 2012 at 15:00 takes centre stage for FootyMad's preview analysis.

Portsmouth face a trip to Coventry City at Ricoh Arena on Saturday afternoon, and have come away with little in previous meetings, having been beaten a depressing 8 out of 12 times.

The most recent encounter between these two sides at Ricoh Arena was just last season, in August 2010, with Coventry City running out comfortable 2 - 0 winners in a Championship match.

Coventry City have been playing quite well at home, winning 3, drawing 2, and losing just 1. A total of 10 goals have been scored by the Sky Blues in those games, with 7 conceded.

The away form of Portsmouth is pretty dire, accumulating just 1 victory and 1 draw from their last six played. While the Pompey have hit 4 goals, 7 have hit the back of the wrong net.

Coventry City are stuck down in the relegation zone of npower Championship with a return of just 32 points from their 38 games thus far.

Portsmouth find themselves stuck right at the bottom of the division. Their 37 games have yielded only 30 points.

FootyMad see this game edging towards a narrow win for the Sky Blues, as the Pompey have been none too clever on the road in recent matches. Home win

Drawn each of their last 4 games.

Not won in the 5 most recent games.

Lost each of the previous 3 away matches.

Not won in previous 5 away matches.