Report From The News 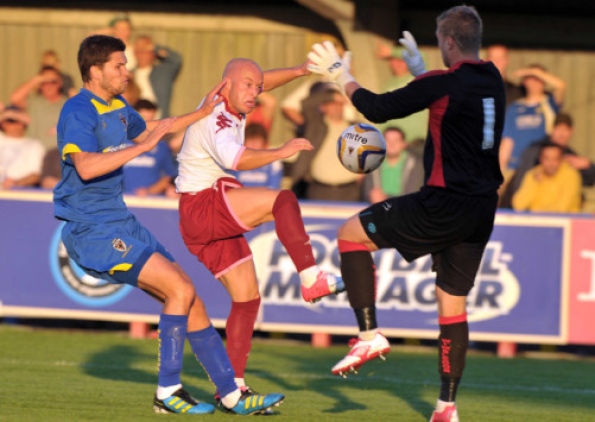 PHOTO: Luke Rodgers gets in behind the AFC Wimbledon defence to slot the ball past keeper Seb Brown and give Pompey the lead at the Kingsmeadow

So is this the beginning or is it the end?

There was a certain poetry about the venue for what could conceivably be Pompey’s last ever game being the home of AFC Wimbledon – the side who knows what it means to start over.

And a certain inevitably that the focus was again lying on events off the pitch at the Kingsmeadow.

That is a familiar feeling to Pompey fans, who are today fearing they may have seen the team they love for the very last time.

The terraces were awash with titbits of information last night that would give at least some form of indication of the way things will go when the August 10 deadline for the high-wage earners to leave is reached tomorrow.

For all the talk of discussions between Balram Chainrai’s Portpin and Pompey Supporters’ Trust there were worrying suggestions of desks being cleared at Fratton Park in readiness for the worst outcome.

The truth is, no-one can emphatically state the outcome until administrator Trevor Birch acts in the coming hours.

The roles of the main protagonists have yet to be defined.

Many were present last night, with Tal Ben Haim smiling his way through Pompey’s final first-team warm-up. He seemed indifferent to the booing from the travelling Blues masses who know how crucial he is to what happens next.

Of course they were there again in their numbers, after travelling up the A3 in passionate form.

And there was plenty to be encouraged about on the pitch as Michael Appleton’s men carried on from where they left off after their demolition of Bolton.

It took eight minutes for Pompey to carve out their first serious chance, with Liam Walker the architect. The man from Gibraltar had time to pick out Ashley Harris with his cross but the Purbrook lad couldn’t direct his header home as he had against the Trotters four days previously.

It mattered little, though, with the visitors making the breakthrough four minutes later.

Luke Rodgers was the man to do that as he profited from some lax Wimbledon defending to go around goalkeeper Seb Brown and tap the ball home from Jon Harley’s through ball.

Wimbledon were posing little threat, aside from a wasted 30-yard free-kick from Angus Macdonald which drifted well wide.

We may not know what fate lies ahead for this proud club off the pitch but the signs are becoming increasingly encouraging on it.

Appleton’s mish-mash of triallists are starting to become a cohesive unit, with understanding growing.

That was beautifully underlined in the manner in which the Blues doubled their advantage after 23 minutes.

A flowing move started by Brian Howard found its way to Walker via Izale McLeod and Liam Lawrence.

The 24-year-old looked to have waited too long when in time and space eight yards out – until he delivered the most delightful of lobs to leave Brown in no-man’s land.

That spoke of the talent the left-footer clearly possesses, with it now nailed on he will be a Pompey player – if there’s a club to play for.

Wimbledon did muster a decent chance of their own 10 minutes before the break when Stacy Long thumped a shot off the post, with keeper Glenn Morris beaten.

Pim Balkenstein then beat Josh Thompson to a header but nodded wide when well placed as Terry Brown’s side built a modicum of momentum just before the break.

The second-half saw the introduction of Conor Clifford and Simon Eastwood in place of Harris and Morris.

Eastwood did his bit to earn a contract no harm with as string of fine saves within 15 minutes of the restart.

Luke Moore was the man denied 11 minutes after the break, with Eastwood making a point-blank stop.

Then the man who was expecting to be playing non-league football for Bradford Park Avenue excelled himself with a triple stop to keep out efforts from Midson, Moore and Brendan Kiernan in quick succession.

The balance of power had shifted towards the home side, with Wimbledon enjoying significantly more possession.

There were elements of needle rearing their head, too, with right-back Macdonald leaving his studs in on Lawrence on a couple of occasions.

Wimbledon should have pulled a goal back with 25 minutes left but sub Byron Harrison passed up a gilt-edged opportunity eight yards.

The resentment between the sides finally boiled over with 15 minutes to go and it was inevitably right-back Macdonald at the centre of a melee also involving Thompson.

Both men went into the book for their efforts.

The away fans had developed a glorious indifference to what was taking place on the pitch by that stage.

Undertaking a conga the length of the away stand was where the focus lied as they continued to show the defiance which is their stock in trade.

Now it just remains to be seen if the Pompey party ends here.