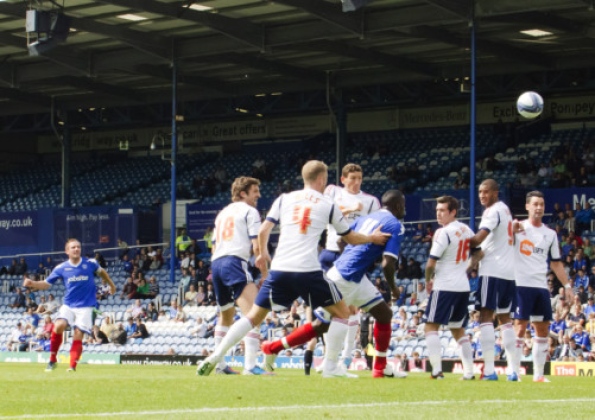 By Neil Allen of The News

Michael Appleton has spent a summer giving assurances. Transfer targets required convincing a Pompey switch does not represent a bold stride into the darkness.  That soon, very soon, any patience they would be willing to lend would pay rich footballing dividends.

Never could Appleton have thought, however, when Owen Coyle came calling, he would also be required to provide soothing words.  The Bolton boss demanded guarantees.  After all, he wanted the trip to Fratton Park to be worthwhile.

The Trotters are self-styled Championship promotion contenders, having retained the vast majority of last season's Premier League squad.  Clearly crucial in achieving such reasonable ambitions was the desire to be tested in their pre-season schedule, particularly by Pompey.

Hence an alarmed Coyle made an early phone call to Appleton last week.  Startled at the prospect of facing a team full of triallists and kids, the Scot wanted to be reassured the Blues would be competitive. Appleton was duly convincing – and it remained game on. Fitting then that the opposition Coyle initially had such a problem with would inflict a 3-0 humbling to leave Bolton and Their fans deeply, deeply embarrassed.

Only two games earlier, certain members of Brighton's back-room staff and substitutes were overheard cruelly mocking Pompey's playing quality during their Spanish friendly.  But the majority of that same squad featured against Bolton – and produced a stunning display which would have shocked even the most outrageously optimistic of home fans.

Admittedly, at the heart of Saturday's performance were Liam Lawrence and Tal Ben Haim – a duo not even invited on that 10-day tour in the hope they would not be present when the squad returned home.  Nonetheless, the side which included nine triallists in its starting line-up – with a total of 13 used during the entire 90 minutes – humiliated the Trotters.

Forget being up to scratch to lock horns with Bolton – Pompey were more than a match for their visitors.  As ever, it is preached not to give too much credence to friendly matches.  They're merely platforms for bolstering fitness levels, we are frequently told. Yet in Pompey's case there are contracts at stake.

In Lawrence and Ben Haim's case, there could well be moves elsewhere at stake. Lawrence, arguably, conjured up his most effective performance since those early days at Fratton Park, when he swept in and was the star man for week after week after week.  Landing in August 2010, he bagged eight goals in his first 18 games during a scintillating start to life on the south coast.

Mind you, fellow Stoke arrival Dave Kitson also savoured a wonderful honeymoon with four goals in his first eight appearances. Sadly that didn't last long. So when Lawrence stepped up to curl home a 25-yard free-kick in the 12th minute, it truly was a collectors' item.  It was a first Pompey goal at any level since he netted a penalty in a 3-2 home defeat against Hull on January 3, 2011. Rather fitting, with Saturday likely to be his last outing.

That strike put Appleton's men 2-0 up against Bolton – an advantage which would ultimately prove unassailable for the visitors. The hosts had already taken the lead in the sixth minute with a well-worked goal – and two triallists orchestrating it in front of the Milton end.  A sweeping move saw Izale McLeod pull the ball back from the right and there was Kieran Djilali to clinically steer a shot into the far corner of the net.

Only seconds earlier, Glenn Morris had produced a superb save to keep out David Ngog from close range after Brian Howard had carelessly given the ball away inside the penalty area.

How Bolton were left to rue that wasted opportunity as the Blues marched up the other end to break the deadlock.  Just five minutes later, Ben Haim charged upfield with the ball and was sent tumbling.  Lawrence lined up the resulting free-kick and duly crashed the ball past Adam Bogdan.

Incidentally, Ben Haim's participation was booed at every opportunity by some sections of the home fans – particularly in the first half – as his costly presence continues to linger.  At one point in the second half there were Pompey supporters chanting for the Israeli international to be sent off following one uncompromising challenge barely worth a yellow card – a moment to raise a smile.

Still, Pompey continued to dominate the Trotters. And on 18 minutes Matt Mills produced a vital clearance off the line to deny a third goal.  A curling cross from Lawrence down the right was pushed out by Bogdan and Howard was following up to fire in a goal-bound shot until Mills intervened.

Wanderers were having their moments, though, and the ever-dangerous Chris Eagles wriggled down the left in the 34th minute and clipped in a cross to the far post which substitute Kevin Davies could only head over when well placed.  Then, minutes after the interval, half-time replacement Benik Afobe wriggled clear of Josh Thompson and fired in a shot which Simon Eastwood brilliantly stopped at point-blank range.

In the 53rd minute, though, the result was sealed when Lawrence sent in a pin-point left-wing cross which was headed home at the far post by a stooping Ashley Harris. It was a superb move and landmark moment for the 18-year-old from Purbrook – netting his maiden Pompey goal in front of the Fratton end.

The outstanding Lawrence was soon substituted to a standing ovation, clearly tiring in his second match of the pre-season campaign.

Similarly, when the impressive Liam Walker was brought off in the 79th minute, the Fratton end chanted 'Sign him up, sign him up'.  The indications are Pompey will do – when given the go-ahead. Now begins a crucial week in the history of Pompey – and there have been plenty of them during recent times.  Except, with a liquidation deadline of August 10 to avoid, this is serious, very, very serious.

Appleton remains confident, though, relaxed even at the prospect of Ben Haim and Lawrence departing and either Portpin or the Trust taking over. It seems he himself has been given assurances, clarification there is a future lying in wait for Portsmouth Football Club

Pompey shrugged off their off-field troubles to romp to a comfortable pre-season victory against Bolton.

Kieran Djilali and Liam Lawrence got the Blues off to the best possible start by netting early goals.

And local lad Ashley Harris came off the bench to add a third after the break and give the beleagured Pompey fans something to smile about.

Once again Michael Appleton was forced to name a makeshift side of youngsters and trialists, although there were starts for Liam Lawrence and Tal Ben Haim.

But it was the Blues who made the brighter start against their Championship opponents.

The hosts had an early sight of goal when Liam Walker floated in a cross from deep that Izale McLeod headed narrowly over.

Blues keeper Glenn Morris then made a fine save to keep out David Ngog's close-range snap-shot.

And Pompey broke straight up the other end to take the lead. DJILALI ran from just inside the Bolton half and swapped passes with McLeod before side-footing the ball past a helpless Adam Bogdan.

And they went further ahead moments later after Ben Haim was fouled 25 yards from goal. LAWRENCE stepped up to take the free-kick and curled home a sweet strike.

Still Pompey poured forward and when Bogdan could only flap at Lawrence's cross, Matt Mills was forced to clear Brian Howard's low drive off the line.

Blues skipper Lawrence then let fly with an audacious attempt from 30 yards that bent just wide of the post.

Bolton finally created a chance on 34 minutes when Chris Eagles did well to wriggle past a couple of challenges and send in a cross, but Kevin Davies failed to find the target from close range.

The action soon moved back down the other end of the pitch, though, and Walker picked out McLeod with a fine cross, with the striker's header deflected straight at Bogdan.

Appleton made three changes at the break with Harris replacing Luke Rodgers up front, Conor Clifford coming on for Djilali in midfield and  Morris making way for Simon Eastwood between the sticks.

But Pompey were still looking dangerous themselves and Harris fired over before Walker sent an angled lob onto the roof of the net.

The Fratton faithful did not have to wait long for a third goal, however, as Lawrence fired the ball into the box and HARRIS dived to head home.

A hoarde of substitutions throughout the second half inevitably slowed the pace of the game.

But Bolton sub Marcos Alonso really should have reduced the deficit on 78 minutes, blazing high over the bar after being left in acres of space inside the box.

They did not do much else to trouble the hosts' goal, though, as Pompey comfortably saw out the remainder of the match.