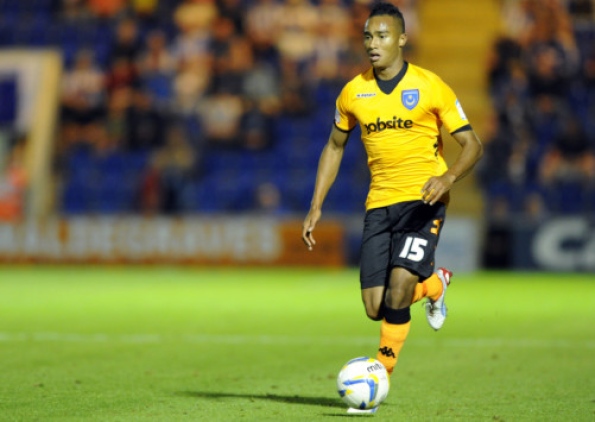 Luke Rodgers put Pompey ahead in the first half with a well-taken finish after Liam Walker’s perfect through ball. 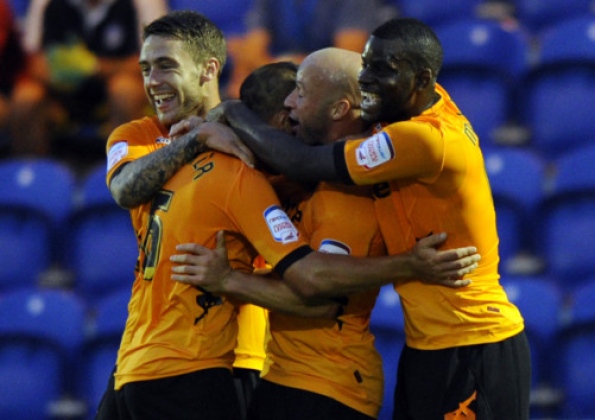 But the hosts hit back on the stroke of half-time, after a fabulous long-range effort from Michael Rose gave Blues keeper Mikkel Andersen no chance.

Both sides had their chances in the second half.

Pompey perhaps just edged it in terms of goal opportunities, though, with Izale McLeod unable to take a couple of clear openings, while Walker struck the outside of a post with a low drive.

Michael Appleton’s side appeared to be heading for a gut-wrenching defeat when Magnus Okuonghae rammed home from close range as he latched on to a corner just seven minutes from time.

Pompey, however, had other ideas and responded superbly moments later.

A marvellous run by Mustapha Dumbuya saw him charge down the right flank to find Rodgers, only for his effort to hit the foot of the post.

But Obita, who had only just come on following his loan move from Reading, was in the right place at the right time to tap home the loose ball and send more than 1,000 travelling fans wild.

But Portsmouth went ahead on the half hour mark when Luke Rodgers latched on to Liam Walker's low defence-splitting pass and slotted calmly past goalkeeper Mark Cousins.

Portsmouth started the second half strongly and Izale McLeod was denied by Cousins, before Liam Walker's low strike came back off the post, but Magnus Okuonghae slotted in Anthony Wordsworth's corner with six minutes to go to give the U's the lead.

Jordan Obita ioduced himself to Pompey fans last night by scoring a minute into his debut to secure a point for Portsmouth in a match they probably should have won.

The game was almost a reversal of Saturday's match with Bournemouth with the first half generally being low an quality but with Pompey dominating the second.

Mikkel Andersen did well to tip over Anthony Wordsworth's free kick in a half of few chances but Pompey's quality shone as debutant Liam Walker played the perfect through ball to Luke Rodgers who ran through the U's defence and slot past Mark Cousins for the opener.

Barring the odd goalmouth scramble, the home fans had nothing to get excited about until right before half-time when a corner led to the ball falling to the feet of Michael Rose who unleashed an unstoppable 30-yard volley into the top corner of the net.

That should have stunned Michael Appleton's men and you would have thought that Colchester would come out all guns blazing in the second half.

But the opposite happened as Pompey flew out of the traps and Izale McLeod really should have done better when he was put through on goal but he couldn't adjust his feet in time and Cousins parried the ball out to Walker, whose shot struck the post.

Pompey fans saw their team continue to play incisive football but were getting frustrated with the assistant referee constantly raising his offside flag.

The home fans and players were also angry with the referee who constantly gave Pompey every little decision, with John-Joe O'Toole receiving a yellow card for his squinnying which entertained the Pompey fans behind the goal.

Another gripe from our point of view is that Pompey never created anything from the numerous corners they won. So it was almost inevitable that Colchester would score from one of theirs as Magnus Okuonghae smashed the ball from inside the box as nobody picked him up.

Appy's response was to bring on Obita for his debut and the decision paid off almost instantly as a surging run down the right from Mustapha Dumbuya led to Rodgers' shot striking the post only for the loanee from Reading to fire in the rebound with his first touch of the ball.

Pompey may have had the victory they deserved right at the death but Brian Howard's strike from distance went just wide as the spoils were shared once again.

This was another good performance from Portsmouth and many of the 1,114 travelling fans believed we should have been celebrating victory, yet were satisfied with a point after Colchester had taken an undeserved lead with only six minutes to go.

We learned a bit more about our players today. Walker had a very good debut, especially when he moved into the centre of the park to replace the injured Lee Williamson.

Rodgers has also proven he can play at this level with another good performance and a fine finish for the first goal.

Jack Compton and Dumbuya once again posed problems for the full backs but I believe Appleton may have unearthed a gem in Kevin Long who again stood tall at the heart of the Pompey defence.

The squad still needs some work as it is in desperate need of another centre back or two, with only one senior currently on the books. There is also another need for a striker as the manager only has three to choose from and McLeod isn't the best taker of chances given the evidence so far.

But if we can keep this side together then this team is capable of going places this season.

Mikkel Andersen: 6 - His opposite number was busier during the game.

Kevin Long: 8 - Held the defence together and won almost everything.

Lee Williamson: N/A - Has a hamstring injury and is doubtful for Carlisle on Saturday.

Jack Compton: 7 - Looks like another good find from Appleton.

Izale McLeod: 6 - Gets into good positions but needs to make more of his chances.

Jordan Obita (Compton 84): N/A - Scored a minute into his debut even if it was laid to him on a plate. What more could you want?

Liam Walker grew up in Spain hearing Pompey tales delivered by his uncle and nan.

Now the 24-year-old is writing his very own story in the Fratton Park annals as he continues to shine so brightly.

Colchester represented the opposition on the day the midfielder, born in Gibraltar to parents from Waterlooville, made his Blues bow.

How fitting then that he and fellow new arrival Jordan Obita should emerge as the crucial performers in last night’s 2-2 draw.

Obita himself only officially arrived on loan from Reading earlier in the day, for what could be Michael Appleton’s final recruit of the transfer window.

Finances, as ever, will dictate that.

That is unless the Blues boss can raise around £60,000 to aid his push for three more players.

Still, Walker and Obita were added to the squad which so impressively grabbed a point against Bournemouth in the league opener on Saturday.

Granted a start, it was the Gibraltar player who would emerge as the pick of the Pompey players at the Weston Homes Community Stadium.

After switching inside to the centre, following injury to Lee Williamson, he would strike the post in the second half for what would have capped an eye-catching performance.

However, Michael Rose’s 30-yard thunderbolt on the stroke of half-time and Magnus Okuonghae’s far-post finish seven minutes from the end tipped the match Colchester’s way at 2-1.

Cue the on-pitch arrival of Obita – on in place of the substituted Jack Compton – and with his first touch grabbing the equaliser just one minute later.

The Reading winger was perfectly placed at the far post to net from close range after Rodgers had initially struck the post.

Netted in front of the away end housing 1,114 Pompey fans, it was the perfect introduction for the youngster.

Certainly a favourable impression along with Walker, who continues to promise much in these early stages of his Pompey career.

In the end it was Colchester who finished stronger, but Appleton’s men hung on through four minutes of time added on to take a point.

A stern challenge, unquestionably, yet another point for the Blues boss as he continues to ease his new-look side through their baby steps together.

And judging from the impacts of Walker and Obita, the duo could play vital parts during the campaign – however long that may be.

Walker was the only change to the side which drew to Bournemouth on the opening day of the League One season.

Granted international clearance earlier on the day of the Colchester trip, Appleton threw him straight into the starting line-up.

He took the place of Kieran Djilali on the right-hand side of midfield, with the former Crystal Palace man dropping to the bench.

New-recruit Obita was also included in the squad – one of six substitutes for the visit to Essex.

However, that was still one short of a full complement of seven – albeit still two more than occupied it at Fratton on Saturday.

In an uneventful opening, Colchester were proving particularly dangerous from set-plays.

Inevitably, it was from a free-kick where they came closest to taking a 16th-minute lead.

Anthony Wordsworth fired in a 25-yard effort, but it was brilliantly finger-tipped over the bar by Mikkel Andersen.

Yet the visitors took the lead on the half-hour mark when Walker slid through a pass and Rodgers calmly slotted the ball beyond keeper Mark Cousins.

On 33 minutes, Lee Williamson limped out of the action, with Adam Webster replacing him to prompt a re-jig.

The teenager slotted in at right-back, with Mustapha Dumbuya moving up to the right-hand side of midfield and Walker coming into the middle of the park.

However, Compton’s delivery could only flash past the far post, with his team-mates unable to get a crucial touch.

On the stroke of half-time, John-Joe O’Toole wasted a glorious chance, heading over from close range following another good delivery from the impressive Wordsworth.

Yet in stoppage time, Rose conjured up a stunning equaliser from absolutely nothing.

Pompey cleared the ball from yet another corner but it fell to the defender who unleashed a ferocious left-foot rocket which screamed into the top corner of the goal.

Pompey almost regained the lead just minutes after the break in a bright start to the second half.

Firstly, Walker put McLeod clean through, but the ball never quite sat up for him as he has flanked by two defenders.

Then Walker followed up with a left-foot snapshot from just outside the area which smacked against the foot of the left-hand post.

In the 57th minute, Pompey fans behind the goal were screaming for a penalty after McLeod went down under a challenge from Wilson as he chased after the ball, but referee Lee Collins was not interested.

It was turning into the Walker show and, after seeing Cousins save his powerful drive, the midfielder clipped in a cross which McLeod somehow failed to head home at the far post.

Colchester, though, took the lead in the 83rd minute when Wordsworth’s corner was finished at the far post by Okuonghae.

But within a minute, Dumbuya’s blistering pace took him down the right wing.

He cut the ball back to Rodgers, whose shot struck the post.

But there was Obita with all the time in the world to steer the ball into an empty net and send the away fans into raptures to cap another encouraging performance.