Day to Forget for Pompey - Report by By Jordan Cross

PHOTO: Jordan Obita was sent off for Pompey in the second half

Pompey’s season hit a low as they went down to a 1-0 defeat to Oldham.

An own goal from new-boy Johnny Ertl settled it on a day to forget for the Blues at Fratton Park.

But the referee, Carl Berry, played a key role in the game in a terrible display of officiating.

He sent off Jordan Obita and Oldham’s Cliff Byrne - in an apparent case of mistaken identity.

Obita walked following a second-half tussle with Connor Brown, but the ref sent off the wrong man for the away side.

The referee never had control of a game, with the visitors outmuscling Pompey.

Obita missed a one on one after four minutes and Darel Russell fired the Blues’ other decent first-half chance wide.

Cristian Montano hit a post four minutes after the restart before chaos kicked in.

Pompey pressed at the death but never really looked like getting a leveller on a frustrating afternoon. 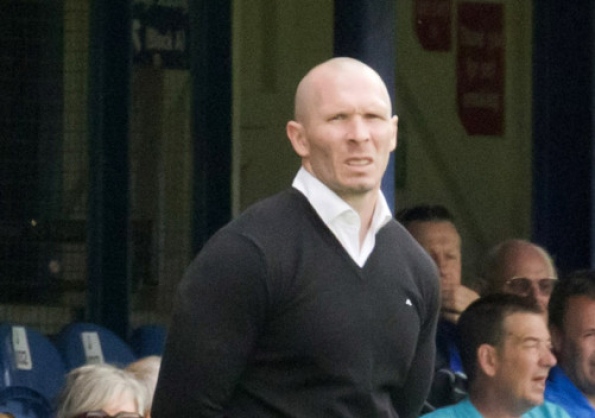 Berry was the central figure in Pompey’s 1-0 defeat to Oldham today.

The official had a nightmare performance and failed to control a game which descended into chaos.

And to make matters worse the official sent off Jordan Obita and, in a case of mistaken identity, Oldham’s Cliff Byrne.

Obita got involved in a tussle with Latics defender Connor Brown, but the wrong man walked for the visiting side.

That capped a display where the official got a string of decisions wrong.

Appleton pulled no punches about his performance.

He said: ‘Let’s face it,- the referee lost the plot today.

‘Nobody knew what was going on in the second-half.

‘I haven’t spoken to Jordan yet, but I will over the weekend.

‘I haven’t seen the sending off.

‘I will decide then what we are going to do about.’

The display of the official failed to mask what was a poor Pompey performance against a side who gave them a physical challenge.

Appleton said: ‘We didn’t have enough shots in the second-half, but we kept working hard.

‘That’s what I want, but we have to handle physical team better.’

A poor Portsmouth side fell to a dire defeat at Fratton Park courtesy of a Johnny Ertl own goal in a bad tempered match.

Pompey fans will surely remember the name of referee Carl Berry who lost control of the match after sending two men off and angering the crowd with his petulence.

However, in all honesty, you'd be hard pressed to find any Pompey fans who think their side deserved a result today after their poorest performance of the season so far.

Luke Rodgers made way for Jordan Obita in the starting line-up and it was the latter who had Pompey's best chance of the game early on, as the home side dominated the first ten minutes.

Liam Walker sent the on-loan Reading striker clean through on goal but he could only strike the ball straight at keeper Alex Cisak when he had the option of squaring the ball to an unmarked Izale McLeod.

Pompey stuttered after that early flurry with Oldham growing into and taking control of what was not a pretty game due to poor passing and interruptions from the referee.

The visitors should have taken the lead late on in the first half as Lee Croft's corner caused chaos in the box and Mikkel Andersen saved a shot before a second was blocked on the line before the ball was eventually cleared to safety.

You would have thought Michael Appleton would have told his players to wake up after a lacklustre first half but things got worse after the break.

Brian Howard had a quality free kick saved but the counter-attack saw two Oldham players break through the Pompey defence and clearly through on goal, though the hosts were given a major let off when the ball was passed forward to Robbie Simpson who was offside.

Just minutes later Cristian Montano struck the post after being given all the time and space in the world to shoot across goal.

Having blown several great chances to score, Pompey decided to be generous and score for the Latics when Ertl slid Croft's cross from the left past a despairing Andersen and into the back of the net, much to the delight of the 150-or-so Latics fans.

Matters got even worse soon after as referee Berry appeared to make two huge blunders.

Chris Brown elbowed Jordan Obita who fell to the ground, yet it was the Pompey striker who was inexplicably shown a straight red card.

To further his incompetence, Berry then dismissed Cliff Byrne after consultation with the fourth official. It was difficult to see whether the right man was eventually sent off or not but it was ten on ten for the rest of the match which was played with the background of a very angry home crowd.

Ashley Harris and Rodgers were sent on late to try and rescue something for Pompey but they could not find a breakthrough and fell to a defeat which may well change the entire mood around the club.

Despite the incompetence of the referee, Pompey were slow and struggled to deal with the physical side of Oldham's game which also favoured the dreaded "route one" long ball style of play.

Paul Dickov has moulded a team based on his own image when he was a player; strong, irritating, ugly to watch and a nuisance to play against. But much like Pompey struggled to deal with him in his Leicester days, they struggled with the physical side of his team's game today and need to be wiser.

Oldham will not be the only side to come to Fratton Park and play that way so Michael Appleton needs to get his team to adapt to that quickly if they are to avoid more poor results like this.

The team should cope easier when Kevin Long returns to the side and Josh Thompson is introduced to League One. The two tall, commanding centre backs should improve Pompey's defence, particularly against long balls.

As for the rest of the team, they will need to up the tempo if Appleton is to stick to his passing game and the side will need to gel quickly if yet another relegation battle is to be avoided.

Mikkel Andersen: 7 - A couple of good stops when Oldham actually found the target.

Liam Walker: 6 - Tried to keep the ball on the floor.

Jordan Obita: 5 - May have been harshly sent off but did himself no favours with constant shirt tugging and an embarassing dive in the first half.

Ownerless Pompey look for first win of the season.

Pompey take on Oldham tomorrow with the news that Trevor Birch has rejected both bids from Portpin and the Pompey Supporters Trust.

Johnny Ertl and Darel Russell are set to make their Pompey debuts as Lee Williamson will miss out again and Adam Webster is also struggling with a hip injury.

Josh Thompson can't play despite signing today and Kevin Long is suspended but Connor Clifford is pushing for a start after scoring against Carlisle last week.

Latics manager Paul Dickov may shake things up after a poor start to the season. Jordan Slew will have recovered from an injury he picked up against Walsall in time to play.

The news coming from PKF will worry every Pompey fan as Trevor Birch has given both Balram Chainrai and the Trust two weeks to submit an improved offer for Portsmouth FC.

A cynic will claim that this is more gamesmanship from Birch who wants to eek out some more money from the club as well as drumming up some urgency amongst Pompey fans who will believe this may well be the last game to be played at Fratton Park. Again.

Therefore there should be another cracking atmosphere at Pompey as football takes centre stage for 90 minutes.

Paul Dickov may well be taking charge of Oldham for the last time tomorrow as he has been linked with the vacant manager's post at Coventry.

It seems like some Oldham fans would be happy to see the back of him after a very uninspiring start to the season. A first round League Cup exit to Sheffield Wednesday has been followed by league defeats to MK Dons and Stevenage, with a 1-1 draw with Walsall sandwiched in between.

Therefore, the Pompey players and fans will believe that the Latics will be ripe for the taking and a first win of the season can be earned.

It will be interesting to see what Appleton does with the defence which is missing the man who has held it all together at times in Kevin Long. The back line was far too generous at Carlisle last Saturday so hopefully the arrivals of Ertl and Russell can shore things up.

With Daniel Bogdanovic not moving to Pompey as expected, Izale McLeod will have hopefully put his horrendous showing in Cumbria to the back of his mind and will find the target tomorrow.

Despite all that is going on off the pitch at the moment, I expect that Pompey can take this opportunity to claim an all-important first win of the season. I would hate to think of the atmosphere around the club if we lost this...

Click here for the League One Lowdown on Oldham Athletic.

Paul Hall scored the only goal of the game as Terry Fenwick's men won in front of just 9,135 fans. Oldham were relegated at the end of the season and have been in the third tier ever since.

Given Oldham's woes on the pitch I believe the Pompey players can bounce back from Saturday's loss and lift the spirits of the Pompey fans with a first win of the season.

After two successive away games, Pompey return to Fratton Park to face Oldham Athletic. Pompey will be looking to secure their first victory of the season after two draws and a defeat so far.

Pompey are expected to again be without Lee Williamson who is struggling with his hamstring injury picked up in the draw at Colchester.

Michael Appleton will be able to call on new recruits Darel Russell,

Johnny Ertl and Josh Thompson all of whom signed on deadline day.

Pompey will be without Kevin Long after his dismissal against Carlisle triggered a one game ban.

Adam Webster continues to struggle with a hip injury so is unlikely to start.

Two players Pompey will not be able to call on are Keiran Djillali and Sam Magri, having both left the club in the last few days.

Oldham boss Paul Dickov has a full strength squad to choose from, and they will be keen to impress after owner Simon Corney blasted the team calling them “unfit” after their recent performances.

Pompey and Oldham have met 33 times in all competitions, the Latics have won 13 of the fixtures to Pompeys 11.