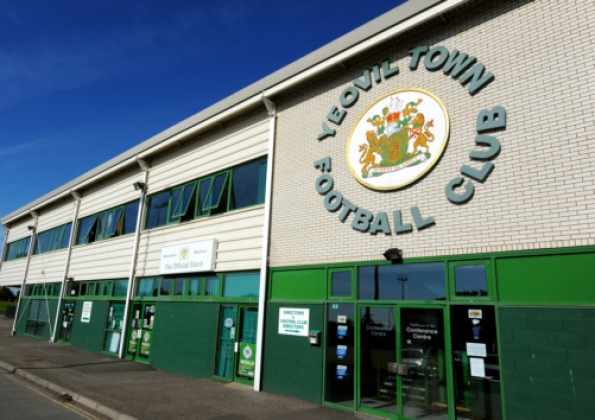 PHOTO: Izale McLeod scores to put Pompey ahead against Yeovil

Gabor Gyepes was the goal hero again as Pompey grabbed a 2-1 win at Yeovil. The Hungarian bagged his second goal in as many games as Michael Appleton’s men delivered another three points at Huish Park.

Izale McLeod made the breakthrough for the Blues before Reuben Reid converted a second-half penalty.  Then, Gyepes tucked away the decisive effort with 12 minutes remaining to seal a deserved win for the visitors.

There were plenty of chances for Pompey to make the breakthrough early on. Mustapha Dumbuya broke three on one after five minutes and freed McLeod, who dallied and allowed Yeovil to clear.  McLeod then had a shot which Marek Stech pushed on to the post, before he gratefully gathered at the second attempt.

McLeod made the breakthrough after 13 minutes when he was put clear by Wes Thomas and ripped a shot home.

Thomas could have had a second when clean through 20 minutes later, but his shot went just wide.

Yeovil had strong penalty appeals turned down just before the break when Thomas clattered Keanu Marsh-Brown, but ref Chis Foy waved play on.  But they got a spot-kick 24 minutes after the restart as Lee Williamson fouled Nathan Ralph and Reid beat Andersen.

Gyepes did the business on 78 minutes, however, with a smart finish on the turn from a corner to send nearly 1,300 soaked travelling fans home smiling.

With a bound, Pompey's season was up and running! Michael Appleton has long argued that fans won't see the best of his side until the end of October, but on a rainy night at Huish Park around 1,300 Pompey fans were given a glimpse of what may well be quite a decent side.

And Appleton didn't even need to introduce recent signing Akos Buzsaky to achieve it. Instead it was his 'old guard' of Izale McLeod and Gabor Gyepes, with his second goal in as manay games, which sealed the win.

Fair enough Yeovil were poor, and in the first half as poor a side as Pompey have played this season. It wouldn't have flattered Pompey to have been 3-0 up at the break and the game over the hill and far away.

Instead it was only McLeod's smart finish after 13 minutes which separated the sides. McLeod had already seen a scuffed effort hit the post, but he gave the keeper no chance with a fine shot from the edge of the area.

After the goal, Pompey were effortlessly in control and Yeovil were largely left chasing shadows. Highly impressive was Johanes Ertl, deputising for the injured Darel Russell in midfield and taking his chance to shine.

Pompey had a scare when Yeovil claimed a penalty as the match drifted towards half time, but referee Chris Foy was having none of it.

Yeovil made a couple of substitutions with Gozie Ugwu and Lewis Young coming on, but Young was very quickly stretchered off. The home side couldn't have been as bad as thay had been however and they at last began to mount a bit of pressure on the visitors' defence, but Anderssen wasn't troubled.

Jon Harley put a great chance to open his Pompey account wide, and with 21 minutes remaining, it looked like it might prove expensive as Lee Williamson gave away a soft penalty and Reuben Reid converted.

Still Pompey looked the more likely side to win it though and, with 11 minutes remaining they rewarded their travelling army when from a corner Gyepes found himslef in the right place at the right time to thump home from close range what proved to be the winner.

Too many times in the past three or four years have Pompey fans thought their club had turned the corner. A couple of wins on the bounce is no sure sign this will be any different. Bigger challenges remain off the field to ensure the stability manager Appleton needs to ensure this side fulfils its potential.

But even if the Football League impose their ten-point penalty, Pompey are now in positive territory. The priority this season is to stay up. Even with one point on the board after ten games, this group of players looks capable of securing the 50 or so more needed to ensure that goal. Follow this up with a win at high-flying MK Dons on Saturday and the sights may be. just may be, set a little higher.

Yeovil 1 Pompey 2 report from the News

Gabor Gyepes barely trains at present and has injections to nurse his ankle through the rigours of football.  A hulking scrapper with a never-say-die attitude – and how Pompey were indebted to his indomitable spirit last night.

A poor Yeovil side had hauled themselves level through Reuben Reid’s penalty to leave those 1,297 travelling Blues fans shocked.  Stunned that their side, for all their dominance, were facing just a point in a match they had led for so long.

So enter the gutsy Gyepes, the new-found goal hero who, for the second match running, dug his team out of trouble.

With 78 minutes on the clock, there appeared no danger when the Hungarian set off in pursuit of the ball as it travelled away from goal after Brian Howard’s corner had been cleared.  But with the grace of any self-respecting striker, he retrieved the ball, spun round, and fired in a low shot from outside the penalty area.  It arrowed through a ruck of players to enter the net – a moment which would prove decisive.

In all the excitement, the Tannoy announcement proclaimed the scorer as Johnny Ertl, a feat also matched by the BBC’s website.  But it was that man Gyepes once again who was the real hero and a goalscorer for the second successive match.  To think, it was his fourth goal in his previous nine competitive matches spread over the past three seasons.

In truth, Pompey’s victory should never have hinged on him, particularly following a rampant first-half display.

Izale McLeod had a shot pushed against the post in the 12th minute before netting seconds later, powerfully crashing home Wes Thomas’ assist.  It appeared a matter of when Michael Appleton’s men would add to their tally – only for Reid to equalise in the 69th minute.

Suddenly the fear emerged that Pompey could be held to a draw by a struggling side who came into the game on the back of five successive defeats.  That was until Gyepes appeared from nowhere to settle matters and give Appleton his second win in a row.

As expected, Ertl was recalled to the Pompey side in place of hamstring-injury victim Darel Russell.  It marked a second start for the versatile Austrian, slotting into the centre of midfield alongside skipper Brian Howard.  That was the only change to the side that defeated Scunthorpe at the weekend, although Appleton did elect to shuffle around his personnel.

Mustapha Dumbuya was restored to right-back, with Lee Williamson moving over from the left-hand side of midfield to occupy the right flank.  Adam Webster switched from right to left-back, while Jon Harley pushed up into the left-midfield spot.  That meant recent recruit Akos Buzsaky was named on the bench, with the Blues boss concerned over his match fitness at present.

When the game kicked off, it was Yeovil who had the first opportunity.  In the fourth minute, Keanu Marsh-Brown cut in from the right and fizzed in a shot from outside the box which Mikkel Andersen tipped around the post. Barely a minute later, Dumbuya’s pace took him through the middle for effectively a three-on-one, with Izale McLeod and Wes Thomas flanking him.  The full-back elected to square to McLeod, whose touch was heavy, allowing Yeovil to intercept and the moment had gone.

McLeod then unleashed a low shot from 25 yards which was comfortably dealt with by the hosts’ keeper Marek Stech.

Pompey came agonisingly close to taking the lead in the 12th minute through that man McLeod. The striker fired in a shot which took a crucial deflection and was pushed on to the post by Stech.  The keeper then reacted quickly to gather as Thomas looked to capitalise from close range.

However, the former Barnet man did net in the 13th minute with an excellent finish. Thomas did the work, putting him through and the ball sat up nicely for McLeod to powerfully lash home from just inside the penalty area.

That opener seemed to sap all belief out of the hosts and their fans. And they had a let off when Byron Webster completely missed a through ball but Harley chose to pass rather than shoot.

At the other end, in the 19th minute Dumbuya underhit a pass back intended for his keeper to let in Reid but the Glovers’ striker could only fire straight at Andersen.

Thomas should have increased the visitors’ lead in the 32nd minute when he held off Richard Hinds’ challenge to wriggle through but he curled his right-foot side wide of the far post.

Pompey had a penalty scare approaching half-time when Thomas tumbled inside the area while chasing Marsh-Brown, bringing the Yeovil man down.  Chris Foy, however, was not interested, much to the anger of the home side who thought they had an excellent case.

After the break the advantage for Pompey continued to remain slender and Harley missed a glorious chance to extend it on the hour mark. Ertl did superbly down the right before whipping in a cross which found its way to Harley who dragged a half-volley wide of the far post.

Moments later a magnificent surging run by Adam Webster into the box resulted in him driving a right-foot effort narrowly over the bar.

And in the 69th minute Yeovil were level after  Lee Williamson’s sliding tackle took down Nathan Ralph inside the box Reid took on the spot-kick duties and confidently slotted the ball to the left of the diving Andersen for the equaliser.

The Blues went up to the other end and when Howard’s shot was parried by Stech, Thomas saw his follow-up blocked by Dan Burn and the hosts scrambled the ball clear.

Appleton’s men did get their noses back in front, though, in the 78th minute through Gyepes. Howard’s corner sparked a scramble and, when the ball was nudged outside the penalty area, the towering defender spun and drove a shot into the net through a ruck of players.

It was enough to settle the contest as Pompey made it two wins in a row to climb up the table a little further.

And for Gyepes, the goals from the unlikely source keep on flowing.

Michael Appleton’s Pompey head to Huish Park on the back of their first home victory of the season, to face Gary Johnson’s stuttering Yeovil side who are without a win in five matches.

Pompey will be without striker Luke Rodgers, midfielder Darel Russel and the versatile Josh Thompson.

They will however be able to call on Gabor Gyepes who has trained unscathed all week. New signing Akos Buzsaky registered in time for the trip to Exeter, but is unlikely to start.

Yeovil will be without key midfield man Ed Upson after his sending off against Preston, but otherwise the Glovers have a full squad to choose from.

Pompey and Yeovil have never faced each other in competitive football, despite the Blues travelling to Huish Park on numerous occasions for pre-season friendlies.