Man of the Match: Gabor Gyepes 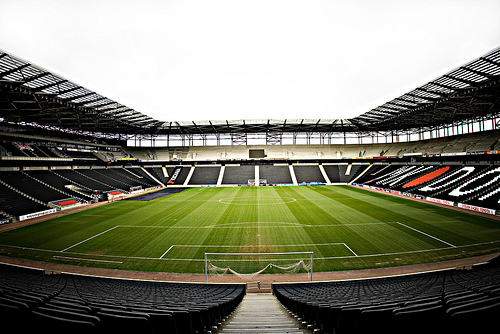 Pompey had to settle for a point at MK Dons as they sacrificed a two-goal lead today in a 2-2 draw.

A dominant first-half display saw the Blues go two up and have chances to bury Karl Robinson’s side.

Gabor Gyepes’ third goal in successive games doubled the advantage before Adam Webster scored an own goal before the break,

The home side dominated after the interval and levelled through Darren Potter with 18 minutes left to earn a share of the spoils.

The first-half proved a frenetic affair with McLeod winning a penalty after four minutes, when David Martin pulled him down - but Howard’s spot-kick came back off the post.

McLeod made the breakthrough less than a minute later, though, as he delivered a smart finish from an angle after being freed by Gyepes.

Pompey should have had a second spot-kick wheh Antony Kay pulled down Wes Thomas, but ref David Coote waved play on.

Gyepes made it 2-0, though, after 20 minutes when he headed home Howard’s free-kick.

Pompey were rampant and had chances to grab a third with Adam Webster and Gyepes going close.

The Dons were forced to make a change with the visitors in total control, with Alan Smith replacing Jon Otsemobor.

That made a difference - and they pulled a goal back five minutes before the break when Webster diverted the ball past Mikkel Andersen from a corner. 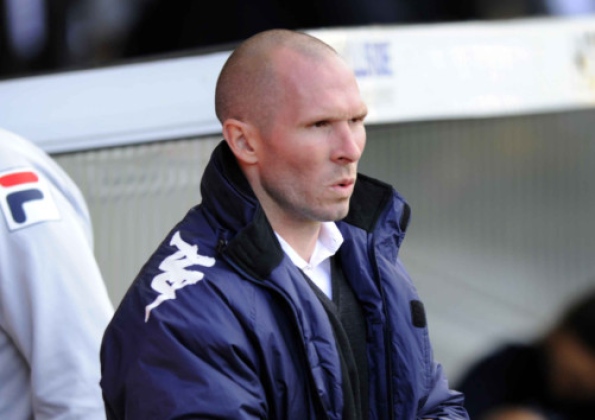 Michael Appleton hailed Pompey’s display at MK Dons as their best of the season.

The Blues picked up a 2-2 draw at Stadium MK today against the promotion chasers.

Pompey were rampant in the first-half against Karl Robinson’s side, scoring two goals, missing a penalty and creating a host of chances.

The home side reduced the arrears before the break and pushed the Blue back after the interval, scoring with 18 minutes left.

Appleton was pleased with what he saw from his men though, as the draw keeps confidence going moving forward.

He said: ‘MK Dons will more than likely be in the top two and get promoted.

‘So overall I think we are pleased to come away with a point.

‘The performance was probably the best I’ve seen from the side this season, especially in the first half.

‘We had a game plan going into the match and it worked a treat.

‘We should have had two penalties and had a host of chances.

‘If we’d said we’d get seven points from three games at the start of the week we’d be delighted.’

Pompey had to settle for a point after throwing away a two-goal lead at MK Dons.

The Blues had earlier recovered from Brian Howard’s missed penalty to forge ahead through Izale McLeod’s fierce finish.

And they appeared to be cruising when Gabor Gyepes headed home to once again prove his attacking worth.

But Adam Webster’s own-goal just before the break gave the hosts hope and they levelled after it through Darren Potter.

Michael Appleton was afforded the luxury of being able to name the same side that started the victory at Yeovil during the week.

But Luke Rodgers had recovered from a thigh injury and was able to take his place on a seven-man bench.

The match got off to a frantic start and Mikkel Andersen was forced into action, getting down quickly to hold Dean Bowditch’s far-post header.

Referee David Coote immediately pointed to the spot, but Blues skipper Howard was unsuccessful for the second time in eight days – this time sending his penalty crashing against the post.

The midfielder was breathing a sigh of relief just seconds later, however, as McLEOD raced onto Gyepes’ pass and confidently slid the ball home.

MK Dons then enjoyed a spell of possession around Pompey’s box, but were unable to really test Andersen.

And the Blues looked particularly dangerous on the break, with both Wes Thomas and McLeod unable to take advantage of through balls that sent them bearing down on goal.

It took a defender to double the visitors’ advantage on 20 minutes – albeit one in good goalscoring form.

Howard swung in a dangerous free-kick from wide on the right and GYEPES got free in the box to head home his third goal in as many games.

MK Dons were certainly not out of it, though, and Pompey did well to survive moments later as the ball ricocheted around their box.

Charlie MacDonald then flashed an angled shot inches past the post as the hosts searched for a route back into the game.

But Jon Otsemobor had to be alert to stop them falling further behind on 28 minutes, poking the ball behind after McLeod had latched onto Thomas’ fine pass.

Then, from the resulting corner, Webster was not quite able to force his header through a host of bodies and over the line.

Pompey were looking particularly dangerous from set-pieces and Gyepes had a header blocked after meeting a corner.

But it was the hosts who went close on 34 minutes and Jon Harley had to hack clear after a low ball into the box had beaten Andersen.

MK Dons were handed a lifeline before the break, however, as Bowditch sent the ball into a congested box and Webster inadvertently prodded it past his own keeper.

There was still time for Pompey to go close to retaking a two-goal lead when Harley picked out McLeod, but the striker was crowded out as he attempted to shoot.

The second half did not begin at same break-neck level as the first, although the hosts wasted a glorious opening on 53 minutes.

Luke Chadwick found Bowditch completely unmarked in the box, but the wide-man sent his volley sailing high over the crossbar.

The scores should have been level soon after when Potter’s fine low cross found Chadwick in the box.

It looked like a simple close-range finish for the Dons midfielder, but Andersen somehow kept the ball out before Lubomir Michalik scrambled it to safety.

Pompey had not really created much in the second half, although they went close to scoring on 68 minutes.

Lee Williamson slid the ball through to Thomas, who took the ball onto his left foot before wastefully curling wide.

And the Blues were made to pay for their profligacy on 72 minutes when a header came back off the crossbar for Potter to smash into the roof of the net from just a yard out.

Appleton then made a double switch, bringing on Akos Buzasaky and Jordan Obita as he tried to wrestle back the impetus.

Buzasaky made an instant impact on his debut, sending a 25-yard shot sailing inches past the post.

But the Blues had not tested Martin in the second half and had to be content with stretching their unbeaten run to three matches.

MK Dons: Pay On The Day

Pompey fans can pay on the day at MK Dons.

Tickets for Saturday’s League One clash – which kicks-off at 3pm – will be on sale from the cash booth next to the away turnstiles.

Supporters can still purchase tickets online here or by calling 01908 622900, but they will have to be picked up from the collection booth next to Gate 6.

More than 2,000 Pompey fans have already bought tickets for the Blues’ first ever game against MK Dons.

Pompey are on their travels again this Saturday as they face the MK Dons. Pompey will be buoyed by an impressive win away at Yeovil on Tuesday night. The Dons have started the season well and Michael Appleton knows his side are in for a tough test.

Luke Rodgers returned to training on Thursday and is likely to start on the bench, with Wes Thomas leading the line with former MK Dons hitman Izale McLeod.

New signing Akos Buzsaky didn’t feature in the win at Yeovil but may pick up some game time in this fixture after completing a week of training with his new team mates.

MK Dons will give a late test to striker Ryan Lowe who has suffered with a virus.

Gary MacKenzie has returned to training but this fixture is expected to come to soon for him.

Pompey and MK Dons have never faced each other with the Dons under their current guise, but both sides will have done their homework for what should be a thoroughly entertaining fixture and the Blues will be backed by over 2,0000 fans at the stadium MK.

Pompey sit 14th with 11 points, while the Dons are placed 5th with 18 points from their 10 fixtures.

Pompey may give Hungarian international Azor Buzsaky his debut away to MK Dons on Saturday - even though he is only around 60 per cent fit.

Boss Michael Appleton reckons the Blues are in for a tough test against Karl Robinson's team and thinks the midfield recruit may be a useful weapon on their big pitch.

The manager told the Pompey website: 'Akos is not fully fit, but it’s a game where we should see some real football played and that will suit him down to the ground. He can come on when the game is stretched a little bit and has got enough quality – even if he’s only 60 per cent fit – to open up any team.'

Appleton expects a big test against a team he tips for promotion or the play-offs: 'The atmosphere’s very good after back-to-back wins, but it’s a very tough game away at MK Dons. They’ve got a big pitch and play with an expansive style. They allow the opposition to play at times, which will make things interesting, but it’ll be a test for our players.

'I’m not saying for a second that we should be anywhere near where they are. They’re an established League One side, who have been in and around the play-off places for the last few years. I’m sure they’ll be expecting to get automatic promotion or, at the very worst, finish in the top six. But we’ve got players who are comfortable on the ball and I’m hoping it will be an open game.

'It might be that we try to stay solid and then use some more attacking options later in the game. But winning breeds confidence and I’ve been pleased with the intensity we’ve shown in our last two games.

'We got the balance right at Yeovil on Tuesday, constantly breaking up play in the middle of the park, while our front two took the ball off their midfielders and defenders time and time again. The only thing I could complain about at half-time was that we weren’t clinical enough. We made it a little bit more difficult than it needed to be, but our keeper didn’t have to make too many saves.'

Off the pitch, administrators have shot down talk that land surrounding Fratton Park has been sold to Portco, one of the parties interested in buying the club.

Reports suggested they had bought land owned by Miland Development 2004 Ltd – who were placed in administration in July. Glyn Middleton, of administrators David Rubin and Partners, told The News: ‘It’s not true – there has been no sale. We were appointed as administrators a few months ago and there have been negotiations going on for some time now.’