A dominant first-half display saw Pompey brush aside Crewe at Fratton Park with a 2-0 win.

Wes Thomas’ early strike and Izale McLeod’s penalty got the job done and made it four unbeaten League One games for Michael Appleton’s side.

That lifted them to 12th in the table on what could be a seminal weekend for the the Blues. That follows strong talk that Balram Chainrai’s Portpin are unlikely to be okayed to return to the club by the Football League.  That would put Pompey Supporter’s Trust in pole position to assume control, although more twists and turns are expected in the saga yet.

Boss Michael Appleton sprung a surprise or two in his team selection, utilising Lee Williamson in a right-back role with Jon Harley in front of him. Akos Buzsaky was handed his first full league start on the left of a 4-4-2 formation.

The approach reaped instant dividends with Pompey making the breakthrough after just 82 seconds. It was Harley who was the architect, as he pitched the ball up to the back post for Thomas to head home.

The one-way traffic continued with Thomas twice going close before Pompey doubled their advantage.  Andy Bond was the man who left a leg out for Thomas to go over in the 17th minute - and McLeod made no mistake as he thumped home an unstoppable effort.

There were further chances for Pompey to add to their advantage before the break, with Bond almost turning in McLeod’s cross.  Thomas then shot on the turn with Brian Howard missing the follow up, before McLeod’s angled drive was kept out by the busy Alan Martin.

Crewe started the second-half with greater urgency and carved out a couple of chances. The best of those fell to sub Byron Moore, who cut into the Pompey box and had time and space - but could only shoot straight at Mikkel Andersen.  The Fratton faithful did all they could to lift their side as the majority of a crowd of 11,829 upped the volume.

Harley responded by whipping in a deep cross which was a whisker away from finding McLeod at the back post.

It was a much more even affair, however, and Aneke forced Andersen into another stop with a 30-yard drive. But Pompey’s defence was in resilient mood and stood strong for just their second clean sheet of the season and another league success.

by Neil Weld at Fratton Park

Pompey delivered the perfect response to their Johnstone’s Paint Trophy humbling with victory over Crewe.

The Blues were in total control throughout the first half and Wes Thomas’ early header broke the deadlock. Thomas then won a penalty that Izale McLeod converted to deservedly double the hosts’ advantage.

Crewe looked a lot brighter after the break, but were unable to break down a Pompey defence that were in no mood to give up their lead.

Michael Appleton made one change from the side that lost to Wycombe during the week, with Mikkel Andersen replacing Simon Eastwood between the sticks. There was an unusual look to the Blues line-up, however, with Lee Williamson at right-back, Jon Harley on the right wing and Akos Buzsaky on the left.

But that did not stop Pompey getting off to the best possible start, taking the lead with less than two minutes on the clock. Harley sent a dangerous cross towards the far post, where THOMAS was waiting to head home from close range.

Crewe had a chance to equalise soon after when Lubomir Michalik fouled Mathias Pogba on the edge of the box, but Luke Murphy’s free-kick was deflected over.  After that, however, it was all Pompey and Thomas shot straight at Alex keeper Alan Martin following fine work from McLeod.

But the Blues did double their advantage on 17 minutes after Thomas was tripped in the box by Andy Bond.  Referee David Phillips pointed straight to the spot and – after an argument with Buzsaky over who should take it – McLEOD slammed home the penalty. Only a fine save from Martin then stopped Pompey forging further ahead, with the keeper preventing Bond from turning McLeod’s low cross into his own net.

A rash of unnecessary bookings slowed things down in the middle of the half, although Brian Howard’s challenge did force Ajay Leitch-Smith off.

It was still the hosts who looked most likely to score, however, and Martin did well to keep out Thomas’ fine curling shot on 37 minutes, with Howard unable to turn home the loose ball. Martin was then called into action again to keep out McLeod’s fierce effort as Pompey finished the half with a flourish.

Andersen was finally called into action at the start of the half, although the keeper was not too troubled by Matt Tootle’s low drive.

The visitors were certainly more ambitious than they had in the opening 45 minutes, without really looking like scoring. Byron Moore had a pop on 54 minutes, but again the shot proved no problem for an under-worked Andersen.

Most of the play was taking place in Pompey’s half, but the hosts were holding firm with some resolute defending. The Blues still looked capable going forward, however, and Harley had a shot blocked before sending in a cross that was just too far for McLeod at the far post.

At the other end, Andersen was finally tested, but managed to scramble clear Chuks Aneke’s effort from distance.  Alex skipper Murphy then flashed a long-range effort inches over the crossbar on 70 minutes to liven up a scrappy half of football.  Pompey survived a scramble in their box soon after, with Gabor Gyepes finally clearing the ball behind.

But there were no more scares as the Blues held on for a deserved victory that takes them above Crewe in the League One table. 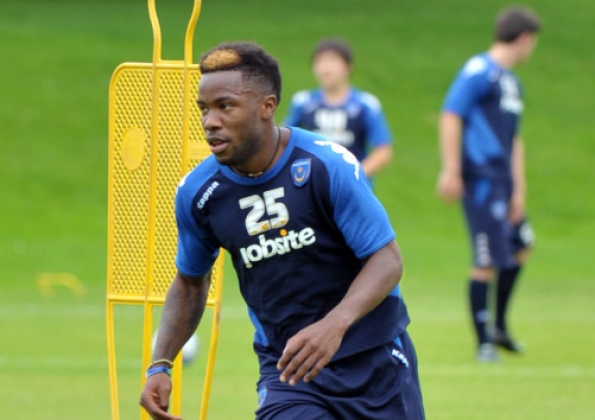 Portsmouth will be without Mustapha Dumbuya (pictured)

Pompey return to League One action after a devastating 2nd round JPT exit at the hands of Wycombe Wanderers on Tuesday night. Michael Appleton’s men have two successive home games and will want to continue their recent good league form which has seen them take 7 points from a possible 9. Todays visitors are Crewe Alexandra, led by manager Steve Davis.

Pompey have a defensive headache with Lubomir Michalik rated as 50/50 while Mustapha Dumbuya (international duty) and Darel Russel (injury) are confirmed absentees. Josh Thompson has returned to training so may well feature.

Michael Appleton may decide to again hand a start to Akos Buzsaky who showed glimpses of his quality in the defeat to Wycombe.

Crewe are likely to have a full squad to choose from, midfield duo Abdul Osman and Byron Moore are expected to be fit after missing the last four and three games respectively.

Pompey and Crewe have faced each other 14 times and the Railway men hold the advantage with 6 wins in total.

The most recent meetings between the sides came back in the 01/02 season where Crewe were triumphant at Fratton Park before a 1-1 draw in the return fixture.

Pompey last beat Crewe on the South Coast back in October 2000 as a late Steve Claridge penalty secured a 2-1 victory.

Pompey currently sit 17th in the League One table with 12 points, while Crewe are 15th on 13 points from the 11 games played.

Team news ahead of Saturday's League One clash between Portsmouth and Crewe Alexandra at Fratton Park.

Portsmouth will be without Mustapha Dumbuya.

The full-back misses out as he is on international duty with Sierra Leone.

But Pompey are hopeful centre-half Lubomir Michalik will be available for the clash despite being on standby for Slovakia.

Fellow defenders Josh Thompson (ankle) and Alex Grant (knee) are still injured along with midfielder Darel Russell (hamstring), but Luke Rodgers is back in contention after a spell on the sidelines.

The striker had been out for three weeks with a thigh injury but returned as a late substitute as Pompey crashed out of the Johnstone's Paint Trophy 3-1 at home to Wycombe on Tuesday night.

Mikkel Andersen should return in goal after Simon Eastwood got a run-out in midweek.

Byron Moore and Abdul Osman are battling for a place in the Crewe squad.

Winger Moore and midfielder Osman have been sidelined in recent weeks with ankle complaints but are fit to be considered for action by boss Steve Davis at Fratton Park.

Veteran goalkeeper Steve Phillips is back in training following knee surgery over the summer but is not yet ready for match action.

Ajay Leitch-Smith shook of the affects of a dead-leg to start Tuesday night's Johnstone's Paint Trophy win at Shrewsbury and is ready to feature once more.

Published in the News on Friday 5 October 2012

Michael Appleton has hit out at the Football League after a request to postpone next week’s Crewe match was rebuffed. The Railwaymen visit Fratton Park on Saturday, October 13.

However, the Blues could be without Lubomir Michalik and Mustapha Dumbuya due to international duty.  Michalik is on standby for Slovakia, while Dumbuya has been named in Sierra Leone’s squad.

A match can be postponed if three players from a club are away representing their country.

But Appleton argues the fact Pompey are only allowed a 20-man squad should be taken into consideration. In addition, Josh Thompson (ankle) and Darel Russell (hamstring) remain on the sidelines.

But on Wednesday the Blues’ approach to the Football League was declined.

He said: ‘One day, further down the line, I will have my day with the Football League. ‘ We have a possible scenario where we lose Lubo and Muzzy for the Crewe game through internationals. ‘But the Football League are not prepared to do anything. ‘Lubo, at the minute, is on standby. ‘The problem is you are in no-man’s land. ‘We might not find out until Thursday.

‘If you have a squad of as many players as you want, most teams have 28 to 30 or at least 25.  ‘Then, if three are missing, the game is called off because it is crucial. ‘What if I have only got 20 players and two of them are missing and both defenders?

‘At some point surely the integrity of the game and the competition has to come into play.  ‘It’s difficult enough for any squad to lose three players but I would like to see the percentage of how big their squad is compared to ours missing two players.’