McLeod at the double as Pompey tame Shrews 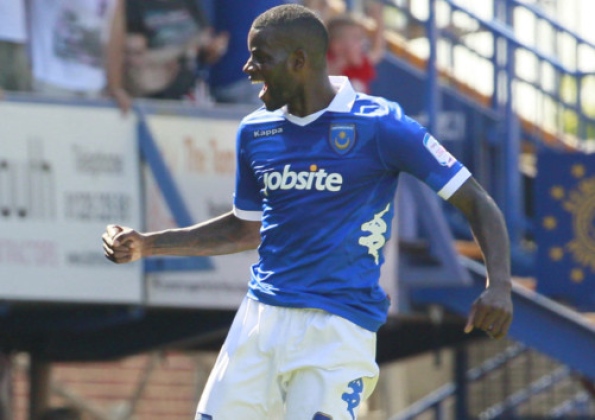 The in-form striker netted in his fifth-successive match, bagging a brace as Michael Appleton’s men chalked up a 3-1 victory.

Wes Thomas grabbed the other – his third for the Blues – breaking the deadlock during an explosive second half.

Marvin Morgan pulled one back on the hour mark, only to be sent off following a skirmish within 60 seconds.

It set up a nervy finish for the hosts, despite their numerical advantage, with Gabor Gyepes twice clearing off the line.

But McLeod settled the issue during six minutes of time added on by bagging his ninth goal of the season.

A crowd of 13,051 were there to witness the victory, a figure boosted by the news of the Trust becoming PKF’s preferred bids in the build-up.

And they went home happy as Appleton’s troops made it five League One games unbeaten to continue their climb up the table.

Appleton made one change to the side which defeated Crewe last weekend, with Mustapha Dumbuya replacing Adam Webster at left-back.

Meanwhile, Mikkel Andersen was declared fit following the groin problem which had kept him out of training for the majority of the week.

When the game got under way, Thomas had a glorious opportunity to break the deadlock on 14 minutes when Gabor Gyepes’ shot from long distance deflected into his path.

The flag stayed down as the striker took one touch and then poked it past the left-hand post as Chris Weale came rushing out of his goal.

The game fell into a lull but an improbable miss by Parry on 32 minutes lit it up once more.

Dumbuya and Michalik went for the same ball, missing it in the process, allowing Marvin Morgan to gallop down the right.

The striker then looked up and squared a pass to Parry at the far post, who somehow crashed the ball first time over the bar from two yards out.

On the stroke of half-time, Pompey were indebted to Anderson for keeping them of level terms, with a stunning save from Parry’s free-kick.

The deadlock was broken in the 55th minute, though, through Thomas.

Michael Hector completely missed a ball down the middle and the Blues’ on-loan striker calmly took the ball around the keeper and slotted it into an empty net.

Just three minutes later and the hosts extended their lead when Howard fed McLeod and he cleverly clipped the ball over Weale.

In the 60th minute Shrewsbury pulled one back when Luke Summerfield’s shot was saved by Andersen and Morgan followed up with a ferocious finish from the angle.

Barely 60 seconds later and Morgan was shown a red card following a skirmish.

After that, Andersen had to push a Summerfield drive from distance over the bar, while Gyepes twice cleared off the line.

But in stoppage-time Johnny Ertl fed McLeod and he clipped the ball home to complete a 3-1 success.

Fans are urged to buy tickets in advance for Pompey’s League One clash with Shrewsbury on Saturday.

The club are anticipating a large volume of supporters to pay on the day and queues could be long.

Tickets are still available online here, but only with the ‘print at home’ option.

Fans can also purchase seats by calling 0844 847 1898 (option one) or in person from the Frogmore Road ticket office.

If you are buying tickets on the day of the game, please arrive as early as possible. The ticket booths outside the Fratton End will open from 9.30am.

More than 10,500 tickets have already been sold for the 3pm kick-off.

Tickets in the Family Section – which cannot be bought online and where adults must be accompanied by a junior – cost £18, £13 and £8.

Portsmouth play host to Shrewsbury Town at Fratton Park on Saturday afternoon, aiming to preserve their record of never having lost at home to the visitors. The Pompey have amazingly won all the 9 previous meetings.

The last time the two teams met at Portsmouth was amazingly over twenty years ago, in January 1989, with Portsmouth running out comfortable 2-0 winners in a Second Division match.Recent encounters between the teams

Portsmouth have managed to pick up just two wins from their last six home games, losing three, The Pompey's have scored 9 goals in these games, but conceded an alarming 10.

The away form of Shrewsbury Town is pretty dire, attaining just 3 draws from the previous six away games. While the Shrews have hit 5 goals, 8 have hit the back of the wrong net.

Portsmouth see themselves just below half way in the npower League One, showing a record of 15 points from their 12 games played so far,

Shrewsbury Town find themselves struggling down in 16th position in the league having picked up 13 points from their 12 matches.

For a detailed analysis of current team form guides in this or any division, click here

Portsmouth are not exactly setting the world alight at Fratton Park at the moment, but we are quietly confident that they can ease past Shrewsbury Town in this game. Home Win

In form Pompey once again play host in League One action, as they welcome Shrewsbury to Fratton Park. Michael Appleton’s charges are unbeaten in four league matches, securing nine points from a possible twelve. Visitors Shrewsbury on the other hand have struggled of late, taking just three points from their last four matches. The match is likely to be played against a fervent atmosphere as recent developments in the Pompey ownership saga looks to have given ticket sales a welcome boost.

Pompey boss will revel in finally having a welcome selection headache, as he has to decide on a strongest eleven with many in-form players vying for a starting berth.

Adam Webster is likely to make way for Mustapha Dumbuya, the 17 year old has featured consistently over the last few games but Appleton wants to protect the young talent from burn out.

John Harley may revert to left back after impressing wide right against Crewe. Jack Compton is also pushing for a start after coming on in last Saturdays home victory.

Pompey will give a late fitness test to goalkeeper Mikkel Andersen, who has struggled with a groin injury.

Shrewsbury defender Darren Jones will be available after missing their last home fixture, while long term absentees Terry Gornell and Sam Winnall are nearing a return to action and could play some part.

Based on previous history all signs point to  a home win in this fixture, Shrewsbury have never taken a point and Fratton Park and have won only 4 of the 17 meetings between these sides in all. Pompey have beaten Shrewsbury eleven times over the years and always by a margin of two goals or more.

The last meetings between these sides ended in a home victory for each side respectively.

Pompey are 14th placed in the League One table with 15 points from their 12 matches, while Shrewsbury sit 16th on 13 points from the same number of games.