Another poor Pompey performance against a team in the bottom 3, where Pompey rarely looked like scoring. Indeed, Pompey have not scored in any of the last 4 matches.

The Pompey Squad was reduced to 17 available players before the game due to an injury to Buzsaky.. A Further injury to Gyepes, who up to that point had been Pompey's man of the match, leaves the squad with 16 fit players.

Pompey conceded two dubious goals as the Guy Whittingham era began with a fifth successive defeat for the Blues.

Adam Lockwood drove home Bury’s opener midway through the first half, despite Mikkel Andersen feeling he had been fouled in the build-up.

And in the second half, Carl Dickinson conceded a penalty – despite seeming to win the ball cleanly – that Steven Schumacher converted.

Whittingham made three changes from the side that lost at home to Brentford during the week.

Ashley Harris made his first start in almost two months and Andersen and Darel Russell were both recalled.

Akos Buzsaky missed out with a hamstring injury, while Simon Eastwood and Adam Webster dropped to a five-man bench.

It was Pompey who looked the more threatening in the early stages and Harris volleyed over before Izale McLeod showed fine control and narrowly cleared the crossbar.

Shakers keeper Trevor Carson then had to come tearing off his line to clear the danger as the Blues continued to apply pressure.

But it was the hosts who broke the deadlock on 19 minutes, although there was a hint of controversy about the goal.

Andersen thought he was fouled as a corner was swung into the box and with the Blues only able to half clear, Lockwood’s low shot crept through a sea of bodies and into the bottom corner.

His cut-back found Brian Howard, but the skipper’s shot was blocked and he could not turn the loose ball on target.

The visitors still looked shaky at the back, however, and David Worrall’s cut-back somehow evaded two unmarked team-mates on 32 minutes.

Worrall then tried his luck from distance and Andersen did well to keep hold of his cleanly-struck effort.

McLeod went close at the other end moments later, working his way into a shooting position on the edge of the box and firing narrowly past the post.

But the Blues were not overly troubling their hosts and it took a fine sliding challenge from Gabor Gyepes to deny Zac Thompson just before the break.

Gyepes walked off gingerly at the break and failed to reappear for the second half with Johnny Ertl taking his place.

Pompey’s minds seemed elsewhere as the hosts kicked-off and immediately launched an attack.

Troy Hewitt broke clear and went one-on-one with Andersen, but the Blues keeper rescued his team-mates by saving with his legs.

But Bury did double their advantage on 56 minutes and once again the goal was shrouded in controversy.

Dickinson appeared to win the ball cleanly as he slid in to tackle Dominic Poleon, but the linesman flagged and referee Craig Pawson pointed to the spot.

Pompey were incensed, but the decision stood and Shakers skipper Schumacher confidently stroked home the penalty.

Jack Compton came on for Jon Harley as Whittingham tried to inject an added impetus into his side.

But it was Russell who went close to pulling one back on 61 minutes, turning on the edge of the back and firing in a shot that was deflected inches over the crossbar.

That was the midfielder’s last taste of action as he was replaced by Liam Walker, who immediately impressed by cutting inside from the right and flashing a shot inches wide.

But the Blues were struggling to breach a Bury back-line that were determined to hold onto their lead.

Dickinson was almost an unlikely scorer, taking a touch and shooting just past the post late in the game.

There was to be no dramatic late comeback, however, as Pompey’s poor run of form continued.

Yet they couldn’t prevent a 2-0 loss in a match the Blues once again struggled to create sufficient goal-scoring opportunities.

Adam Lockwood broke the deadlock on 19 minutes when his shot from outside the area was allowed to creep through a crowded penalty area and into the net.

A second was added by Steven Schumacher on 56 minutes from a controversial penalty awarded against Carl Dickinson.

Whittingham made three changes to the side which lost against Brentford in the week.

Also missing was Akos Buzsaky, who injured his hamstring in training on Thursday.

When the match got underway, Harris would have Pompey’s first attempt on goal, volleying a dipping effort comfortably over the bar after a clearing header fell to him 25-yards out.

A piece of quality from Izale McLeod then saw him, with back to goal, touch Lee Williamson’s pass past marker Matt Doherty and swivel to fire a shot narrowly wide.

Yet on 19 minutes the hosts took the lead after poor defending from the Blues.

There were suggestions of a foul on Andersen as a corner came in from the left and the ball fell to Lockwood on the edge of the area.

He beat Harris to it to drive in a shot which someone went through a packed penalty area and trickled in at the far post.

Pompey responded with Dickinson drilling a ball down the left channel to put McLeod through and the striker neatly lifted the ball over one defender only to then half-volley it over.

A great move from the visitors on 30 minute saw Williamson free Harris down the right and his cut-back found Brian Howard, whose first shot was blocked and his second screwed wide.

Bury were the better side, though, and David Worrall fired in a swerving shot from the left which Andersen did well to collect cleanly.

At half-time Gyepes was replaced by Johnny Ertl in the centre of defence in an enforced change with the Hungarian injured.

Within seconds of the restarts Troy Hewitt found himself clean through but Andersen did well to stand up and block with his feet.

Bury extended their lead on 56 minutes in highly controversial circumstances.

Dickinson appeared to produce a brilliant sliding tackle on Dominic Poleon inside the box only for the linesman to shock both sets of players by signalling for a penalty.

There were furious protests from the visitors, but Schumacher stepped up to plant it to Andersen’s right.

Jack Compton and Liam Walker were introduced and the latter curled a left-footed shot from the right which whistled past the far post with keeper Trevor Carson beaten.

But there was no way back for the visitors, whose 2-0 loss was confirmed by the referee’s final whistle.

Pompey are on their travels again this week in League One, with caretaker manager Guy Whittingham leading the Blues at the 11,699 capacity Gigg Lane, following the departure of Michael Appleton to Blackpool.

Whittingham will be tasked with halting a four game losing run in all competitions, and  faces a 23rd placed Bury side desperate to push their way up the table. 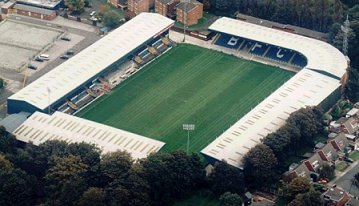 Pompey look set to be without striker Luke Rodgers, after the former New York Red Bull striker said goodbye to the fans via Twitter, although no official confirmation or reason for his departure has been made.

Ashley Harris had no reaction to his ankle injury in the defeat to Brentford so will push for an appearance, while Scott Allan serves the second of a three game suspension.

Mikkel Andersen and Simon Eastwood will again by vying for the number one jersey.

Bury have no new injury concerns, but defender Mark Hughes will be hoping to keep his place in the side ahead of recently suspended Efe Sodje.

Pompey and Bury have met 25 times in all competitions and both sides have won nine of the encounters each.

The last two meetings in between Pompey and the shakers were in 1998 and ended in 2-1 victories for the respective home team, while Pompey last won at Gigg Lane back in 1997.

Pompey currently sit in 17th place in League One with 18 points, while Bury are 23rd with 12 points.