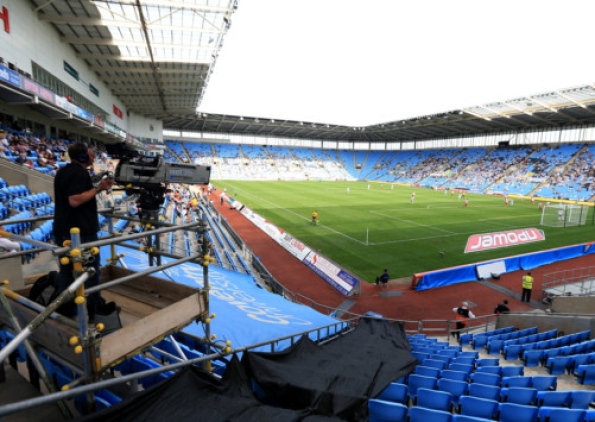 by Neil Weld at the Ricoh Arena

The striker netted deep into stoppage-time to ensure the spoils were shared on a wet and windy afternoon at the Ricoh Arena.

Gary McSheffrey had opened the scoring late in the first half and the Blues did not really look like getting back into the game.

But they did grow stronger after the interval and McLeod’s 11th of the season at last lifted Pompey’s gloom.

Guy Whittingham made three changes from the side that lost at home to Leyton Orient during the week.

With Mikkel Andersen returning to Reading, new loan signing Alex Cisak made his debut between the sticks.

There were also starts for Ricardo Rocha and Johnny Ertl, with Gabor Gyepes and Nathaniel Mendez-Laing dropping to the bench.

Jake Jervis, who arrived on loan from Birmingham on Thursday, was named among the substitutes.

The strong wind and steady rain made conditions difficult, with both sides struggling to find their passing range in the opening stages.

Pompey enjoyed a couple of forays forward without creating any chances, while Richard Wood headed McSheffrey’s corner wide for the hosts.

But it was Coventry who settled quickest and Cisak had to fly to his right to parry clear after David McGoldrick had turned sharply on the edge of the box and fired in a shot.

The keeper made an even better stop moments later to keep out a McSheffrey free-kick that somehow found its way through a crowded box.

Pompey were being put under pressure and Cyrus Christie was next to go close when he burst down the right and into the area, but was unable to beat Cisak from an acute angle.

They survived that tricky spell, but were still unable to trouble Joe Murphy in the Sky Blues goal.

The closest they came was on 34 minutes when McLeod tried to catch the keeper out at his near post, but the ball could only find the side netting.

But the Blues found themselves behind at the break as James Bailey’s pass cut open their defence, allowing McSheffrey to race onto the ball and slide past Cisak.

Whittingham made a change at the start of the second half with Scott Allan making way for Mendez-Laing.

Pompey began in promising fashion with a corner causing plenty of uncertainty in the Sky Blues box.

But Coventry were soon on the attack and Cisak did well to get a hand to McGoldrick’s drive following a quick break.

Darel Russell then made a brave block to deny William Edjenguele, before the Sky Blues centre-back saw a header cleared off the line by Mustapha Dumbuya.

Jervis came on for Paul Benson just past the hour mark as Whittingham looked to inject an attacking impetus into his side.

They had an opportunity on 65 minutes when a corner routine ended with Mendez-Laing driving wide from the edge of the box.

And the Blues had another chance when Murphy picked up a back-pass, giving the visitors an indirect free-kick from inside the six-yard box.

After much deliberation about where the wall should be placed, McLeod touched the ball to Jervis, whose fierce drive was deflected over.

Pompey committed men forward in the closing stages as they went in desperate search of an equaliser.

But it was Coventry who went closes to scoring as Carl Baker swung in a cross that was just too high for an unmarked McGoldrick.

Baker then sent a curling long-range strike crashing off the crossbar and McGoldrick was offside as he tucked home the loose ball.

The 817 travelling Blues fans were given hope when the fourth official displayed five minutes of added time.

And they got their reward when Adam Webster hit a long ball forward, which McLEOD ran onto and slid past Murphy.

Pompey head to the Ricoh Arena to face Coventry, hoping to arrest their poor run of form. The Blues have lost the last 7 games in all competitions, their worst run for over 30 years. After a indifferent start to the season Coventry have started picking up points, and have won their past two away games, scoring 8 goals.

Akos Buzsaky has moved on loan to Barnsley so will not feature for Pompey again. Scott Allan will play the final game of his loan spell, but has indicated his wish to extend his stay at Fratton Park.

Coventry manager Mark Robins has no new absentees, and is expected to keep the same side who beat Colchester midweek.

Pompey and Coventry have met 29 times, with the Sky Blues victorious on 14 occasions, compared to 10 for Pompey.

The last fixure between these sides ended in a 2-0 victory for Coventry, after they had gone down 2-1 at Fratton Park earlier in the season.

Pompey last won at the Ricoh in a 2010 FA Cup fixture, with a late Aaron Mokena header in injury time securing safe passage for Pompey on their way to the FA Cup Final.