by Neil Weld at Prenton Park

Pompey showed plenty of spirit to continue their recovery with a second away draw in as many games.

The Blues twice came from behind to pick up a point at high-flying Tranmere thanks to goals from Gabor Gyepes and Jake Jervis.

Gyepes headed in early in the second half to cancel out Ash Taylor’s opener, while Jervis opened his account less than a minute after Michael O’Halloran had restored Tranmere’s advantage.

Guy Whittingham made three changes from the side that dramatically drew at Coventry a fortnight ago.

Simon Eastwood returned in goal following Oldham’s decision to recall Alex Cisak, while Gyepes started in the centre of defence.

There was also a recall for Nathaniel Mendez-Laing, who made up part of a three-pronged Blues attack.

It was a bitterly cold afternoon on Merseyside, but there was nothing to make the fans forget the temperature in the opening stages.

Mendez-Laing did create some excitement when he robbed Rovers centre-back Taylor 30 yards from goal before being crowded out as he tried to force his way into a shooting position.

Johnny Ertl then tried his luck with a snap-shot from the edge of the box, only to see the ball fly high over the bar.

But Tranmere started to move through the gears as the half progressed and Mustapha Dumbuya and Ricardo Rocha both made brave blocks to deny Andy Robinson and Liam Palmer respectively.

Sandwiched in between was a long-range effort from Adam McGurk that forced Eastwood to get down low to his left and palm the ball around the post.

The keeper made an even better stop on 28 minutes, showing quick reflexes to push Jake Cassidy’s close-range header over.

But he could not stop the hosts from breaking the deadlock on 30 minutes. Pompey failed to fully clear Robinson’s free-kick, allowing McGurk to send the ball back into the box for Taylor to head home.

The Blues had not looked threatening before the break, but whatever Whittingham said at half-time seemed to do the trick as they equalised within five minutes of the restart.

Ertl won a free-kick on the right, Brian Howard swung the ball into the box and GYEPES rose to head home his fourth goal of the season.

Mendez-Laing had another chance moments later but, after displaying some neat trickery, his tame shot was easily dealt with by Rovers keeper Owain Fon Williams.

That was the winger’s last notable contribution to the game, however, as he was replaced by Jervis on 66 minutes.

Tranmere retook the lead soon after as O’Halloran met Robinson’s low cross and stabbed the ball into the net from a yard out.

But the Blues were not behind for long as JERVIS raced onto Ertl’s pass, beat Rovers right-back Danny Holmes and curled a shot past Fon Williams.

There was still time for Tranmere to go close to claiming all three points and Eastwood did well to deny Palmer.

But that would have been harsh on the Blues, who could even have snatched victory themselves when substitute Scott Allan broke forward and rolled a shot narrowly wide in stoppage-time.

After a two week break Pompey return to action with a trip to league leaders Tranmere. A last gasp Izale McLeod goal earned Pompey a point away at Coventry last time out, to arrest a poor run of form. Caretaker boss Guy Whittingham will be keen for his side to push on and distance themselves and the relegation battle. Tranmere top the table with 39 points, and will be hoping to gain momentum heading into the busy christmas period, having not won in the league in three games. 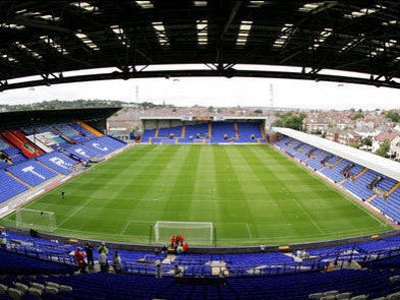 Following the recall of goalkeeper Alex Cisak by parent club Oldham, former Swindon Town stopper Phil Smith has penned a one month deal at Fratton Park. The experienced 32 year old will likely be on the bench with Simon Eastwood starting.

Scott Allan recently extended his loan deal, and will feature.

Pompey will choose either Paul Benson or Jake Jervis to partner Izale McLeod in attack.

Tranmere will be without influential captain James Wallace, who has ligament damage while on loan defender Ben Gibson is struggling with a thigh injury.

Saturdays opponents have met 30 times in all competitions, with hosts Tranmere victorious on the majority of occasions with 13 victories in all.

Pompey will be encouraged by their last performance at Prenton Park, as a Diomansay Kamara goal saw them run out 1-0 winners in a Carling Cup fixture.

Pompey are unbeaten in five games accross all competitions away at Tranmere, not suffering defeat since October 1996. Caretaker manager Guy Whittingham was on the scoresheet the last time Pompey tasted league victory at Prenton Park, scoring in a 4-2 victory in September 1999.