by Neil Weld at The County Ground

The new year failed to bring Pompey a change of fortune as they suffered a second half capitulation at Swindon.

There were encouraging signs before the interval as the Blues more than matched their promotion-chasing hosts.

But James Collins came off the bench to hit four goals, while also providing an assist for Danny Hollands.

Guy Whittingham made four changes from the side that were beaten at home to Yeovil three days earlier.

Johnny Ertl skippered the side in the absence of Brian Howard (groin), while there were also starts for Jon Harley, Scott Allan and Ashley Harris.

New signing David Connolly had to be content with a place on the bench after joining the Blues the previous day.

Swindon looked the more likely to score in the opening stages, but a combination of some decent defending from Ertl and a Simon Eastwood save kept the hosts at bay.

Pompey were playing with three centre-backs and the unfamiliar formation was working, with Robins boss Paolo Di Canio growing increasingly animated on the sidelines.

The Blues then started to look more threatening at the other end of the pitch. Liam Walker drew a save from Swindon keeper Wes Foderingham, before Mustapha Dumbuya’s cross-cum-shot had to be palmed over the bar.

But Dumbuya almost undid all of the visitors early good work with a suicidal back-pass on 23 minutes.

Eastwood had to come racing off his line to clear and was fouled by Andy Williams in the process, earning the Robins midfielder a booking.

A committed display from the visitors was summed up on 31 minutes when Lubomir Michalik and Ertl combined to dispossess Williams.

Pompey then raced up the other end, but a fine attacking move ended when Darel Russell’s scuffed shot hit Harris and rolled wide.

Dumbuya caused the Swindon defence plenty of problems with a surge into the box soon after, although he elected to shoot rather than pass and sent the ball into the side netting.

Pompey had looked bright in the first half and they continued where they had left off at the start of the second.

Lee Williamson’s run towards goal was crudely ended by Nathan Thompson and the midfielder picked himself up to curl a free-kick against the crossbar.

But it was substitution by Di Canio on the hour mark that proved to be the turning point.

Collins came on for Martin up front and met Ritchie’s corner with his first touch to head Swindon into the lead.

Whittingham reacted immediately by throwing on another forward, handing Connolly a debut in place of Walker.

But Pompey soon found themselves further behind. Michalik blocked one Robins shot, but the loose ball fell for Collins to turn and fire home.

The Blues had fallen to pieces and Collins was the tormentor in chief, turning provider when he cut the ball back for Hollands to bury past Eastwood on 69 minutes.

Collins then completed a 13-minute hat-trick, by stooping to head home Ritchie’s cross and pile more misery on their opponents.

But the striker was not done yet – grabbing his fourth of the afternoon by converting Alan McCormack’s cross from the left.

Despite what was unfolding on the pitch, the 1,504 travelling Pompey fans kept making a racket in both the stands they inhabited.

They deserved at least a consolation for their backing, but it failed to materialise as 2013 started with yet another defeat. 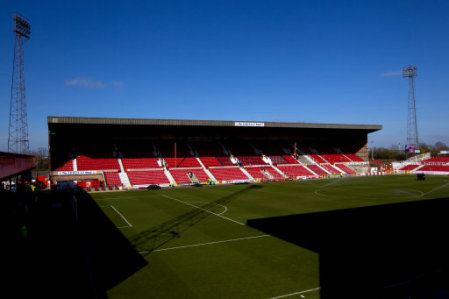 Pompey begin 2013 with a tricky trip to the County Ground to face Paulo Di Canio’s Swindon. The Blues have endured a woeful run of form of late, not winning since 20th October and will be keen to find a catalyst to boost their survival hopes. Di Canio’s Reds are chasing promotion and find themselves in and around the play-off positions coming into the decisive few months of the season.

Pompey will be without striker Paul Benson due to the terms of his loan agreement with parent club Swindon.

Izale McLeod agreed to leave the club on Monday by mutual consent, and replacement signing David Connolly is expected to start. The former Southampton man has been training with the Blues after spending the summer as a free agent.

Ricardo Rocha faces a late test on a tight hamstring.

Defender John Harley misses out after picking up his 5th booking of the season in the defeat to Yeovil.

Swindon have no new injury concerns, and welcome midfielder Alan Navarro back to the match day squad.

This will be the 69th meeting of these two sides, hosts Swindon having the upper hand with 27 victories.

Pompey will be looking to avenge a 2-1 defeat to Swindon earlier in the year at Fratton Park.

Pompey will face former youth starlet Matt Ritchie who has flourished since joining the Reds.