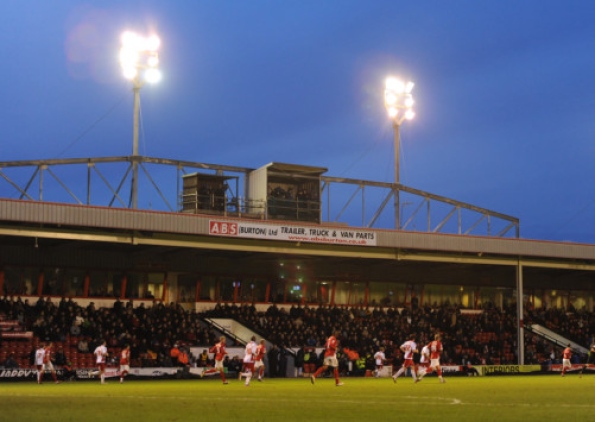 Pompey’s miserable run continued with another defeat, this time at the hands of Walsall in front of the Sky Sports cameras.

Once again the Blues started brightly and were more than a match for their opponents in the early stages.

But again it was lapses of concentration that saw Pompey undone, with Febian Brandy and Will Grigg taking advantage of some poor first half defending to score.

Guy Whittingham made three changes from the side that were heavily beaten at Swindon on New Year’s Day.

David Connolly was handed his first start alongside Paul Benson up front, while there was also a start for Nathaniel Mendez-Laing out wide.

The Blues made a solid start and Benson sent a looping header narrowly over after meeting Liam Walker’s free-kick.

But in truth there was not much to excite either the sparse West Midlands crowd or those watching at home on television.

Benson should have livened things up on 19 minutes when the striker was found totally unmarked in the box by Lee Williamson. He had time to bring the ball down, but instead sent a first-time volley over the crossbar.

Walsall finally threatened midway through the first half, but Jamie Paterson’s effort was always rising and failed to trouble Simon Eastwood.

But Pompey were looking solid at the back and not providing the hosts with any clear-cut opportunities.

Eastwood had been a virtual spectator in the opening stages, but was still picking the ball out of his net on 29 minutes.

The Blues failed to properly clear a Saddlers corner and Grigg sent in a low cross for Brandy to convert at the far post.

Pompey could have found themselves further behind moments later, but Eastwood managed to palm clear Craig Westcarr’s low curling effort.

Walsall did increase their advantage on 40 minutes, however. Brandy latched onto Adam Chambers’ long pass forward and although Eastwood kept out his short, Grigg was on hand to lash home the loose ball.

Whittingham made a change at the start of the second half with Allan replacing Walker wide on the right.

But it was the Saddlers who were first to threaten, although Eastwood was not overly troubled by Paterson’s angled drive.

Connolly then curled wide from the edge of the box before Walsall attacked again and Grigg drew a save from Eastwood after charging through the Blues back-line.

When Pompey did create opportunities they were let down by poor finishing. A prime example arrived on 52 minutes when Karl Darlow could only punch clear Mustapha Dumbuya’s corner and Williamson volleyed wildly over from the edge of the box.

Walsall looked more dangerous at the other end of the pitch and Eastwood was forced into action again, getting low to his right to push Malvind Benning’s effort behind.

It then took a desperate last-gasp challenge from Dumbuya to deny Grigg after the striker had surged into the Blues box.

Pompey had brought on Harris to give them an extra attacking threat as they looked to make an unlikely comeback.

But it was still the hosts that looked more likely to score and Eastwood did well to deny Westcarr after the Walsall forward had been sent through on goal.

The travelling Blues fans still seemed to be enjoying themselves in the stands, but the closes they went to having a goal to cheer was when Darlow beat away Connolly’s snap-shot late on

Pompey’s misery continued as they went down to a 2-0 loss to Walsall.

Goals from Fabien Brandy and Will Grigg at Banks’s Stadium made it 14 games without a win for the Blues.

That means another match without a maximum will equal the 15-game run without a win in Pompey’s 1999-2000 season.

The fact the visitors had their first shot on target from Scott Allan with 10 minutes left summed up their night.

It was a case of same old story in the first half.

The Blues arguably had the edge in the opening half hour and settled the better of the two sides.

But two moments of kamikaze defending made all the difference.

Both Paul Benson and David Connolly had headers over the top, while a flowing move ended with Nathaniel Mendez-Laing having a shot blocked.

But it was the home side who tool the lead in the 29th minute as Brandy got the wrong side of Mustapha Dumbuya and fired past Simon Eastwood.

It got worse for Dumbuya in the 40th minute as his attempts at playing offside came unstuck for the second.

Brandy was all on his own in the box as the full-back stepped up too late. His shot was saved by Eastwood but Grigg rolled in the follow up.

The second half proved to be a scrappy procession with Pompey rarely looking like getting back into it.

In fact, they had to rely on Eastwood to make a number of good stops in what was a shoddy half of football from both sides.

Allan mustered a shot on target in the 80th minute and there were a couple of decent efforts from Connolly - who looked fairly lively.

But the truth of the matter is Pompey never looked like making a fist of it as they remained entrenched in the League One drop zone.

Pompey’s trip to Walsall was re-arranged for Friday, January 4.

The Blues were due to travel to The Banks’ Stadium on Saturday, January 5.

But the League One encounter has been brought forward, with Sky now televising the game.

Can Pompey win for the first time in 14 games live on TV?

Portsmouth make the journey to the midlands in a bid to halt a winless run in League One that now stretches to thirteen games.

Paul Benson returns to the squad after being unable to face his parent club and its likely he will replace Ashley Harris in the starting line up. Brian Howard, Gabor Gyepes and Ricardo Rocha all look set to miss out again due to injury.

Former Pompey youth Florent Cuvelier will miss this game for Walsall with a hamstring injury which is now being treated back at parent club Stoke. Andy Taylor is also missing with a groin strain.

With Pompey televised on Sky the people of the whole world can see just how bad we are tomorrow evening if they really have nothing better to do.

In truth, Pompey played fairly well at Swindon for an hour and the 5-0 scoreline was worse than the actual performance suggests. However, Walsall are improving having looked like prime relegation fodder a month ago and will fancy themselves against a ragged back four which lacks the leadership and ability of Gyepes and Rocha.

Still, this is football and for that reason alone there is a chance that Pompey may get a result at the Bescot Stadium. It wasn't long ago that Hartlepool won at table topping Sheffield United and who would have predicted QPR to win at Stamford Bridge yesterday?

This month looks like getting worse with player exits inevitable so it would be nice to have something to cheer about for once and lift the mood a little as the all-important court case gets ever closer.

Kevin Harper's strike and Svetoslav Todorov's header put Pompey in a comfortable position in this game. Junior pulled one back on the stroke of half time to make the second half nervy.

Paul Merson missed a sitter as the Saddlers piled on the pressure but Pompey held on for the win and knocked Leicester off the top of Division One to re-take top spot as the race for promotion entered its final stage.

More suffering. It's hard to make a case for anything other than another defeat.