Pompey concede after 13 seconds and could have been 4-1 at the break (instead of 2-1) as Wycombe hit the woodwork twice...

The second half Wycombe added another and Pompey were very poor against a team a league below.. .

Sorry Pompey dumped out of Trophy

Woeful Pompey were dumped out of the Johnstone’s Paint Trophy by League Two strugglers Wycombe as they crashed to a 3-1 defeat.

Gareth Ainsworth’s side were good value for the success as a strong Blues side were swept aside in the rain at Fratton Park.

Dean Morgan doubled the Chairboys’ advantage before Izale McLeod pulled a goal back on the stroke of half-time.

Morgan then made it 3-1 from the spot after 56 minutes, as he scored at the second attempt after Adam Webster pulled down Bruno Andrade.

It couldn’t have been a worse start as Pompey shipped a goal in seconds.

Joel Grant curled it in as Wycombe charged forward straight from kick-off.

It got worse for shambolic Pompey after nine mintes as chaos reigned in the box and Morgan forced the ball home after two Joe Kuffour shots were saved by Simon Eastwood.

Kuffour was running amok against the Blues defence - and twice hit the post, with Wycombe threatening to blow away Appleton’s men.

Gabor Gyepes’ header was saved by Nikki Bull as Pompey finally got some control of the game in the first half.

But it was still end-to-end stuff with the rain teeming down at Fratton Park.

Pompey pulled one back on the stroke of half-time, with a predatory strike from McLeod after Wes Thomas’ ball into the box.

It took 11 minutes of the restart for Wycombe to put the game out of Pompey’s reach.

Pompey huffed and puffed late on but never looked like getting back in the game as Wycombe enjoyed a night to remember.

Pompey return to Fratton Park to face manager-less Wycombe in the Johnstone’s Paint Trophy. Pompey beat South Coast rivals Bournemouth in the last round after a pulsating 2-2 draw, while the Wanderers were one of 16 teams given a first round bye.

Akos Buzsaky is set to start for Pompey, after coming on as a late substitute in the draw with MK Dons.

Luke Rodgers has returned to full training and may well start, wish Ashley Harris vying for a start also.

Michael Appleton may decide to rest Gabor Gyepes after the defender has been carrying a slight knock.

Wycombe will be buoyed with a home win over Torquay last Saturday, and may decide to remain unchanged.

Midfielder Josh Scowen is a definite absentee after collecting five yellow cards this season, and Matt Bloomfield is not expected to feature after recently returning to training following a groin complaint.

Dean Morgan impressed against the Gulls and will hope to keep his place.

Pompey and Wycombe have never faced each other competitively, but will both be keen to push on from recent good form to lift the spirits of both clubs.

Pompey are on a three game unbeaten run after league wins againt Scunthorpe and Yeovil, with a draw at the stadium MK on Saturday. Wycombe drew with Plymouth last week before a home win against Torquay and a win at Fratton Park on Tuesday would complete a good 10 days for caretaker boss Gareth Ainsworth.

Keep Up The Good Work (report by Neil Weld) 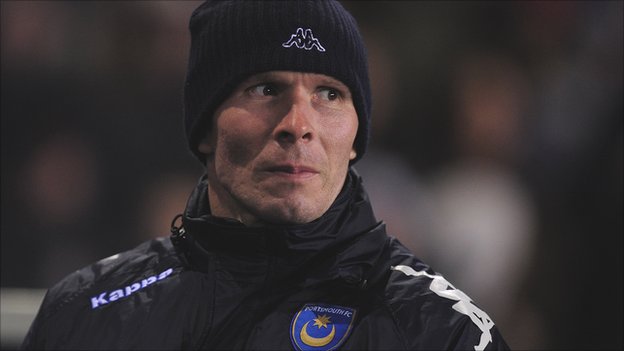 Michael Appleton wants Pompey to keep up the momentum against Wycombe on Tuesday night.

The Blues go into their Johnstone’s Paint Trophy second round tie after collecting seven points from three league games.

Pompey beat Scunthorpe 2-1 and won by the same scoreline at Yeovil prior to Saturday’s 2-2 draw at MK Dons.

But there is now a break from League One duties as they prepare to face League Two strugglers Wycombe.

And Appleton believes it is vital that Pompey continue their recent fine form.

The Blues boss said: “We’ve built up a bit of momentum and we want to make sure that continues.

“The Wycombe match provides a chance for some of the lads to get minutes under the belts and stake a claim for a place in the side.

“We’re in this competition and we want to do well in, but it’s dangerous to think too far ahead. We’re just concentrating on beating Wycombe.”

The Chairboys are only outside the League Two relegation zone on goal difference, although they did beat Torquay at the weekend.

And Appleton believes a trip to Fratton Park provides Wycombe with the perfect chance to forget about their troubles.

He said: “It’s been a difficult start to the season for them. I imagine it will be a relief for them to walk away from that.

“Every side sees winning at Fratton as a massive scalp and it will be the same for Wycombe, coming to a club in a higher division.

“We’ve got to make sure we have a professional attitude and don’t let any complacency creep in.”