10 POINTS FOR CONSIDERATION AND ALL TO PLAY FOR 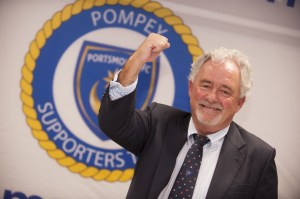 Iain McInnes is the proposed Chairman of Portsmouth Football Club, under the PST takeover plan. He is one of six major backers of the bid and is a passionate Pompey fan.Until now Iain has kept his own counsel upon the whole process, in preference of striving and delivering a conjoined and fully funded bid by the PST.

Today, he speaks out to put the record straight on the bid, confirming to all supporters some crucial details whilst unashamedly leading a riposte against its detractors and critics.

1)     A competitive bid by its very nature must be confidential. Therefore after months of planning and thousands of man hours we have delivered one credible solution. We neither desired nor expected to be bidding against a body of people responsible for creating a position that threatens the very existence of our club, but that is what we have been faced with and responded to. We welcome and encourage comment from all, but will not accept uninformed prejudice from any.

2)     A Trust divided within itself? Never has it been my privilege to work alongside such a committed and loyal group. A number have suffered both personal and health issues attributable to their involvement. We may have different ideas like any passionate group of football fans, but we have common hopes and values. The unthinkable alternative seems to involve one idea and negotiable values.

3)    Our bid has been analysed, accepted and may well be adopted by PKF, The Football League, PFA and the PCC. Any comment to the contrary is simply a lie.

It needs to be recorded in this bid, where too often arrogance diminishes wisdom, that all of the above parties have shown us respect, encouragement, support and shared information, but with a complete absence of prejudice or partisanship.

4)     All the major investor funds, together with the initial pledge money, have been in a dedicated escrow account for some weeks now. There is also a separate established contingency for the purpose of contesting the likelihood of litigation.

5)     All the money invested will be, by way of equity and not loans at uncompetitive interest rates as has all too often been the case in the past. All the major investors have waived any entitlement to returns of any kind. It will represent the highest level of ‘non debt’ investment in PFC for some time. In essence ‘the money stays in’.

Of course, a Trust owned club also needs fans’ donations, so please pledge like mad when the prospectus arrives.

We cannot collect these funds until we have bid acceptance of course, but be ready and willing nonetheless.

6)     The compatible agreement with our property partner offers the lowest rental on a 10 year lease (indeed nil in year 1) from any source past, present and I will take a flyer at the future with the guarantee to return Fratton Park to PFC ownership, possibly within a year contingent on receipt of planning.

7)     Our bid is based upon a competitive player budget, but importantly one that is discussed, agreed and implemented by the manager, consistent with our finances and supplemented by any improved performance. The least a manager deserves.

Home grown talent will be the core of our future success and at the centre of our financial planning ongoing.

8.)   There is much to criticise in the husbandry of the club as it stands, partly a factor of administration and uncertainty. However, there is vast opportunity within both the dedicated staff themselves allied to more progressive and motivational management in promoting the PFC brand and the ‘match day’ experience. We are engaged in scouting and interviewing management capable to achieve this.

9)    The club will be run by a performance motivated and talented Management team. An experienced CEO with day-to-day control alongside a Sales and Marketing Director and Financial Controller. We would expect the Football Manager to have a more integrated role in the running of the club.

These job roles would report closely into a Board constituting a Chairman and Directors, reflective of business experience, ownership and of course Trust and fan participation.

We then have the huge advantage of an ‘Advisory Board’ with recorded success and broad ranging experience to call upon for any matters of a suitable nature. Indeed I very much feel the runt of the litter!

10)   Now it’s the decision of The Football League and the application of rules they laid down. All I can tell you is the day the PST bid team met at The Football League HQ, we were the only bid in town. I think the other was withdrawn. Although courteous and I think relieved they had a bid to survey, all the same they were probing, considered, challenging and discerning. If these criteria are maintained, there is likely to be only one outcome.

Ultimately it is our club in their hands.

Finally whatever the outcome, we are Pompey fans first and foremost. We should treat acceptance with humility and grace, for there is much to be achieved.

If the outcome goes against us, we still have a club to support and we will have to stop finding faults and find remedies through what is likely to be a difficult period for everyone. A lot can be achieved by talking directly, rather than about each other.

All I would respectfully say to Balu is ‘you can’t shake hands with a clenched fist’.