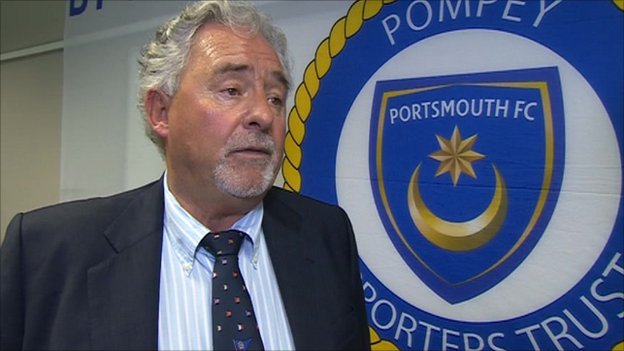 Potential new Portsmouth chairman Iain McInnes has hit back at claims from Balram Chainrai a fans' bid for the club would fail due to "in-fighting".

Chainrai also said the Portsmouth Supporters' Trust (PST) bid would fail due to "a lack of actual money".

The businessman's firm Portpin and the PST are vying for control of the club, which is in administration.

"Never has it been my privilege to work alongside such a committed and loyal group," McInnes said in a statement.

The 61-year-old is one of four 'high-net-worth' individuals who have invested six-figure sums as part of the PST bid.

Who is Iain McInnes?

Sells businesses in 1995 with collective turnover of £10.5m

First approached by Portsmouth for financial assistance in 1996

Turns downs opportunity to become a director of the club

Comes out of retirement.

Current turnover of companies is £18m, with 300 people employed

He will become chairman of the club if administrators PKF and the Football League choose them as preferred bidders.

However, it is understood Chainrai is in pole position to take control, but McInnes has dismissed suggestions that the Trust's bid is divided.

"A Trust divided within itself?," said McInnes.

"A number have suffered both personal and health issues attributable to their involvement.

"We may have different ideas like any passionate group of football fans, but we have common hopes and values. The unthinkable alternative seems to involve one idea and negotiable values."

McInnes says he is still hopeful they can take control of the club and has urged the Football League to ratify Portpin's bid carefully.

The PST believes Chainrai should fail the league's 'owners and directors' test as he has twice been involved in a club that has gone into administration, but Portpin have argued against this.

"Now it's the decision of the Football League and the application of rules they laid down," added McInnes.

"All I can tell you is the day the PST bid team met at the Football League HQ, we were the only bid in town. I think the other was withdrawn.

"Although courteous and I think relieved they had a bid to survey, all the same they were probing, considered, challenging and discerning. If these criteria are maintained, there is likely to be only one outcome."