The last Sports Mail set to roll off the presses 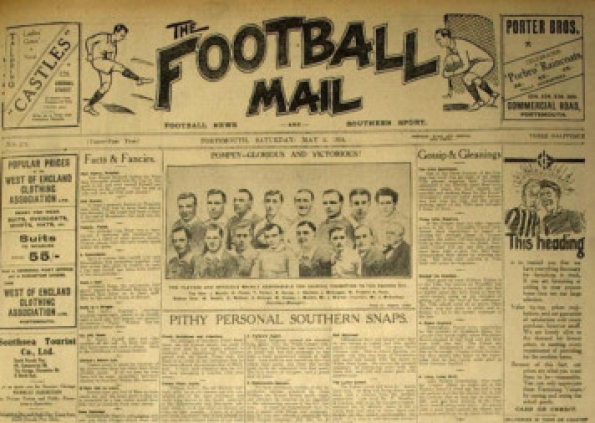 Pompey Glorious and Victorious was the headline in the Football Mail in May 1924 after the club clinched the third division title to gain their first-ever promotion in the Football League.

Staff at The News are this afternoon working on the last edition of The Sports Mail.

It’s bound to be an emotional afternoon for journalists and fans alike as the last copies of the 109-year-old paper hit the streets.

Chief sports writer Neil Allen has the honour of filing back the last ever Pompey ‘runner’ as Pompey take on MK Dons at Stadium MK in Milton Keynes.

Sports writer Jordan Cross is also there, filing live reports to portsmouth.co.uk during the game. And of course, our live reports on the internet will continue, with more and more fans choosing to receive our matchday updates on the web and on our football app.

But although that alternative led to Sports Mail sales dwindling to the point where the paper was making a loss - one of the reasons we have decided to close the title mid-season - there has been an outpouring of affection for the Mail from readers.

Sports editor Howard Frost, who is at The News Centre masterminding the final edition, said: ‘We have been overwhelmed by the response. It’s a shame that the Sports Mail cannot be sustained, but we will be going out in style with tributes to the paper and some of the many memorable front pages from past Saturdays.’

Extra copies of the last edition have been printed, but there is expected to be big demand for the final edition, so the advice is to get to the shops early, with outlets taking delivery from around 6.30pm.

Any reader is unable to get a copy tonight should ring our newspaper team on 023 9262 2207 from 9am on Monday, when we shall sell any returned copies on a first come, first served basis, at 55p plus postage and packing.

If you want to pay or own tribute to the Sports Mail or share a memory about the paper, email [email protected] or post a comment on this story.

Of course, The Sports Mail was not just about Pompey and local football fans won’t miss a kick from the parks and youth scene with our new eight-page pullout in The News every Wednesday.

This will feature reports and pictures from all our local leagues.

As well as our new-and-improved grass-roots coverage in The News, darts will now be featured in the paper every Thursday, with snooker and other cue sports having its own page in The News every Friday.

All the best Pompey bits from the Sports Mail will also now be moving to The News.

That means you’ll still get to go back in time with the Blues with a nostalgia column. The club’s season stats will appear every Monday, while our chief sports writer Neil Allen will get to have his say every Saturday. And they’ll be even more.

And finally, The Sports Mail sailor isn’t bidding farewell, either. Our recognisable face to many Pompey supporters will now be switching to Monday Sport, hopefully with his thumbs up for many more times this season!