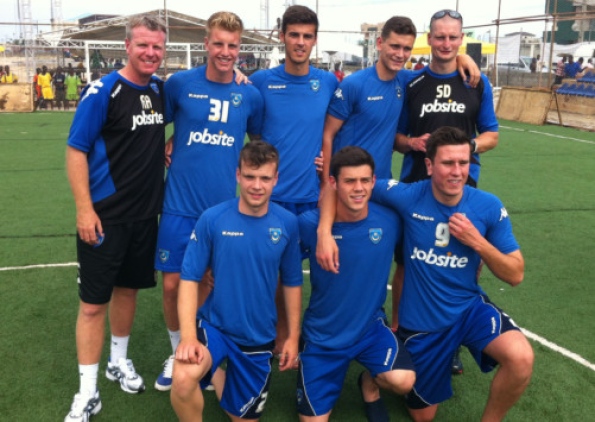 PHOTO: Andy Awford and Academy youngsters (taken when in Nigeria)

The Blues took the lead after just eight minutes when the hosts failed to properly clear the ball and George Branford volleyed home from the edge of the box.

Bradley Tarbuck then doubled their advantage midway through the first half, converting Jack Maloney’s cut-back.

Lewis Horsburgh completed the scoring just after the interval, latching onto Branford’s through ball and slotting into the bottom corner from the edge of the area.

Academy manager Andy Awford said: “It was the first of our group stage matches and it’s good to get off to a winning start – you don’t want to be chasing your tail.

“We were 3-0 up by half-time and in total control. We dominated and played some really pleasing football.

“Lewis then scored a fourth after the break to put it to bed and we saw out the rest of the game in an extremely professional manner.

“We’ve done a lot of defensive work in training recently and I was delighted with how solid we looked.

“To be fair, we’ve played as well as that this season, but the big difference was that on this occasion we took our chances.

“It was an all-round good performance and now I want to see us build on this result in our next few matches.”