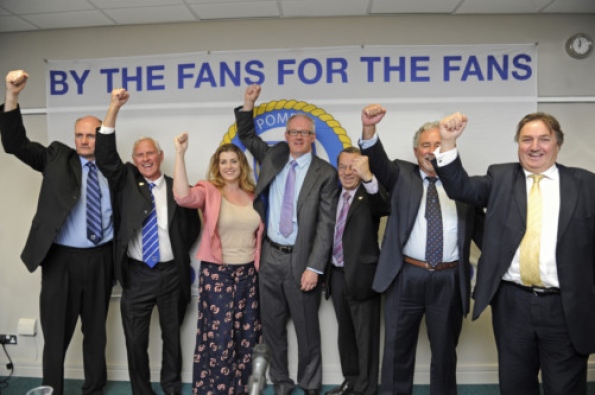 THE Pompey Supporters’ Trust has been named preferred bidders to take over at Fratton Park.

Trust spokesman Colin Farmery confirmed this afternoon that the trust has been named as preferred bidders – ahead of Balram Chainrai’s Portpin.

Mr Farmery told The News: ‘It’s good news for all involved. We are all thrilled about it.

‘It has been a lot of hard work and we are now in a great position to hopefully seal the deal.

‘There’s a lot of hard work ahead but this is a moment to savour.

‘It has been in the offing since this morning as we were getting a steer that was the way it was going.

‘It has been PKF driving this and we have respected them throughout.’

‘Ultimately there has been a lot of hard work to make this happen. Our core message is we want fans to turn up and support the team on Saturday.

‘As far as we are concerned this is the chance to create the biggest community club in Britiain and we want to show just how big it can be by getting the fans through the gates on Saturday against Shrewsbury Town.

Pompey administrator Trevor Birch said: ‘After extensive discussions over the past few weeks, we have today nominated Portsmouth Supporters Trust as the preferred bidder for Portsmouth Football Club.

‘We will be working with the Trust, the Football League and the Professional Footballers Association to conclude the sale of the Club as soon as possible.’