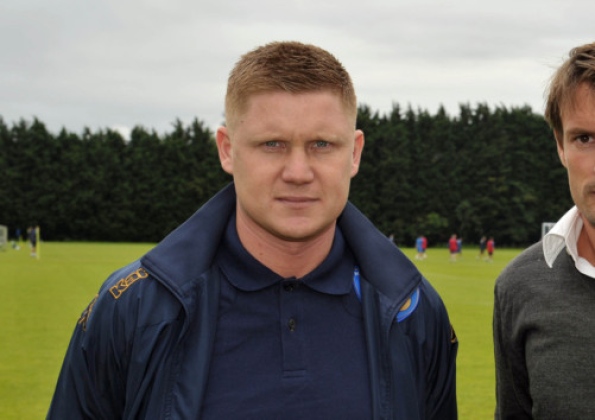 PHOTO: Head of recruitment Luke Dowling has left Pompey and is expected to join Blackburn

Dowling, the Blues’ head of recritment, and goalkeeping coach Keeley are now expected to link up with former Pompey manager Michael Appleton at Blackburn Rovers.

Blues caretaker boss Guy Whittingham paid tribute to the duo for their work at Fratton Park.

He said: ‘Both have been excellent assets to the club. I totally understand them moving on and taking the opportunity.’

Meanwhile, Whittingham revealed he was hopeful of bringing in much-needed new players before this weekend’s trip to Scunthorpe.

‘I’m hopeful of getting two, possible three, in before Saturday,’ he said.

John Keeley spoke of his pain at leaving Pompey but insisted: I need to pay the bills.

The goalkeeping coach ended a six-year association with the Blues as he joined former manager Michael Appleton at Blackburn.

The ex-Brighton stopper is expected to be joined by former head of recruitment Luke Dowling and strength and conditioning coach Chris Neville this week.

There is ongoing uncertainty over the futures of the remaining staff at the club in the wake of Pompey’s troubles.

They were last week hit with a 10-per-cent wage cut by administrators PKF as they were dealt yet another painful body blow.

It proved a bridge too far for Keeley, who took the decision to leave Fratton Park for a move north. In the end it proved an economic call for the 51-year-old, albeit a difficult one.

Keeley explained he would never have left had the club been on a steady footing.

But in the end, he simply had to go to cover his costs.

He said: ‘I couldn’t turn down the chance – it would have been stupid of me.

‘We had to see the administrator on Tuesday afternoon and take another wage reduction.

‘How long can you continue to live like that?

‘I spoke to the gaffer and it was job done after that.

‘It’s such a shame because it’s a fantastic football club with brilliant people. Such a shame.

‘It keeps me in a good job. We all know the situation. Who wouldn’t take the chance?

‘It’s all right for people to expect you to stay but they pay their bills every month and we can’t afford to pay ours.

‘I don’t really expect they will but people shouldn’t knock us. We’ve done a year in administration now. We gave it our all.

‘If the club was running properly, like it was when I first arrived, you would never dream of moving on.

‘We all know what a great place it is but you have to live.’

Keeley admitted he would look back on the time he spent at the club fondly.

He arrived at Pompey from Brighton as the club’s Academy goalkeeping coach in 2007.

Keeley then stepped into the first-team picture after David Coles’ departure for West Ham with Avram Grant in 2010.

He explained he had built a strong affinity with Pompey in his time at the club and had nothing but admiration for the Blues fans.

Keeley said: ‘I’ve had fantastic times at a brilliant club. I’ve loved every minute of working at Pompey with the staff and the brilliant fans.

‘When you think we lost at Swindon 5-0 and they gave the team a standing ovation off the pitch, well, I don’t think you’d see that anywhere else.

‘It’s sad to be going but I just hope the club gets sorted.

Luke Dowling was lured by the promise of a Portpin takeover and the creation of a West Brom-inspired infrastructure.

Six months later, he leaves for Blackburn with Pompey fighting to avoid League Two and haunted by liquidation.

Pompey’s former head of recruitment does not need to bemoan a July move from Crystal Palace which turned sour.

After all, at least Michael Appleton offered him an escape route along with John Keeley and Chris Neville.

For the fans attempting to save their club, the long agony continues.

Nonetheless, there is anger from Dowling over how those blueprints presented to him upon his Pompey arrival have swiftly been shredded.

He said: ‘The way I look at it, everyone should still be there.

‘At the start of the season the club was getting bought. We thought Portpin were coming in and had many, many plans.

‘We had a £4.5m wage bill, there was a good core staff, Michael wanted the club to be run in a similar foundation to West Brom.

‘It was all about giving it a go at trying to get promoted at the first time of asking.

‘Michael had been at a very good football club in West Brom and it was his intention to go along the same route here (at Pompey), that is what attracted me.

‘In the short-term I was to be head of recruitment, but then eventually take on a role similar to Dan Ashworth (West Brom’s sporting and technical director).

‘I was made promises when I left Crystal Palace to come here. They didn’t come forward and when I say that it’s not Michael Appleton’s fault, he just relaid the news from those trying to sell the club.

‘Suddenly the wage bill was adjusted and the list to get players changed. The takeover was not happening in the August window, then we got towards Christmas and there was still no news.

‘Trevor Birch has had to cut costs, the wage bill and then the training ground. Over time you would have thought it would have got better but it got worse and worse.

‘I don’t even know who is to blame. It is a shame for the football club, that’s the main thing.

‘We should all still be there, though. Michael was going to put us in the right direction and where the club should be. It should be happening.’

Irrespective of Dowling’s job title, his remit was to scout players and opposition.

His departure means there are no full-time scouts employed by Pompey.

But Dowling insists he enjoyed his time at Fratton.

He added: ‘There is no point looking back and being negative. I’ve met some good people in a short space of time.

‘I would have loved to have stayed at a great club but I am now going to team up with the manager who brought me to the club originally.

‘It’s just a shame what has happened at Pompey.’