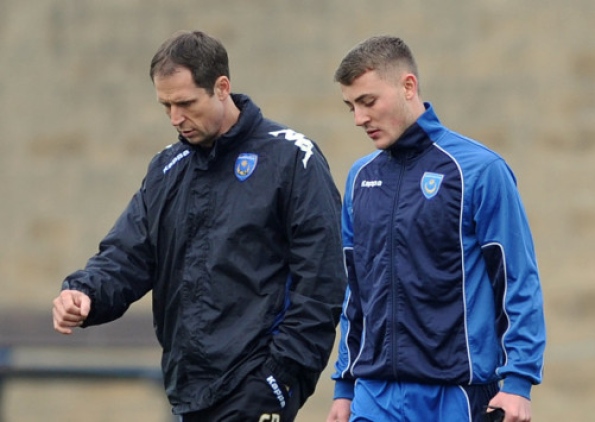 Chris Neville is to become the latest member of Pompey’s backroom staff to join Blackburn.

The long-serving strength and conditioning coach will tomorrow seal a reunion with former boss Michael Appleton at Ewood Park.

He joins Luke Dowling and John Keeley in quitting Fratton Park this week for the Championship club.

On Tuesday, all Pompey staff were informed by administrators PKF there would be a new round of 10-per-cent pay cuts as they seek to further slash costs.

Since then caretaker boss Guy Whittingham has lost three of his prized backroom members.

Pompey's match at Scunthorpe on Saturday has been postponed due to a frozen pitch.

Local referee Richard Wigglesworth made the decision following a 9.30am inspection of the Glanford Park on Friday

Scunthorpe have promised an early decision over whether their match with Pompey will go-ahead this weekend.

The League One fixture is under threat from the weather following extreme wintry conditions at the start of the week.

The Glanford Park pitch remains under a blanket of snow, with more forecast tomorrow.

Crucially, covers have been protecting the playing surface, yet have a layer of snow already on them.

As a result, the Iron have called for fans to turn up from 9am tomorrow with spades to help clear the pitch.

But with the weather not expected to warm up, it casts doubt on whether the fixture will go ahead.

For Pompey, it is potentially a second successive match that could fall foul of the weather after Notts County’s trip to Fratton Park last weekend was postponed due to a waterlogged pitch.

The Blues’ December 22 trip to Hartlepool was also called off at late notice following heavy rain.

But Scunthorpe, who are managed by Brian Laws, have pledged they will inform travelling fans of a decision at the earliest possible moment.

An Iron spokesman said: ‘We had snow at the start of the week – but the danger is more snow is forecast.

‘The weather is no worse than it has been anywhere else and there is a pitch cover on at the moment.

‘However, our covers can withstand minus four – but it was minus seven on Tuesday night.

‘We have appealed for people to turn out to help clear the pitch of the snow tomorrow morning and we will assess it from there.

‘It will be an early decision, though, to help people who are travelling. That could be tomorrow or early Saturday.’