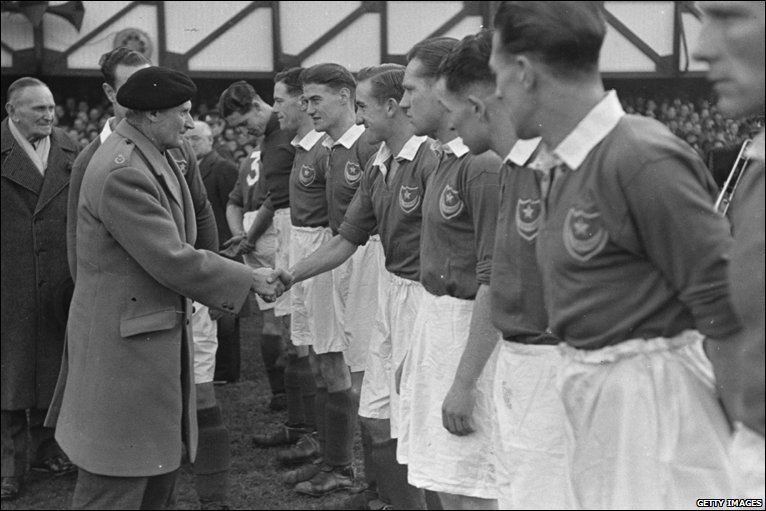 Pompey celebrated their 50th anniversary in 1948. Field Marshal Montgomery who was president of the club greeted the players before the match against Arsenal at Fratton Park, which they won 4-1.

article from the equalizer

Portsmouth Football Club may have recently slipped from the upper echelons of the English game, a victim of boardroom incompetency and relegated to The Championship saddled with serious financial difficulties, but it was not long ago that they were basking in the glory of an FA Cup triumph under the stewardship of Harry Redknapp.

That 2008 title had capped one of the most successful periods in the club’s history, but Portsmouth’s most golden of ages came during the 1940s as they became one of the dominant forces in post-war British football.

The South Coast club’s last major title had come just months before the outbreak of conflict in 1939, a Cliff Parker-inspired Pompey beating Wolverhampton Wanderers 4-1 in front of 99,000 at Wembley. Eight years on, Portsmouth were celebrating their Golden Jubilee and hopeful of collecting some silverware despite having a squad largely bereft of senior internationals and household names.

However, Portsmouth, led by captain Reg Flewinn and powered by the goals of forwards Ike Clarke and Peter Harris, started the season in superb form and went unbeaten for thirteen games before defeat at Wolverhampton towards the end of October. Adopting the W-M system that was popular at the time and had been refined by former Arsenal manager Herbert Chapman, Pompey enjoyed both the best defensive and attacking records in the division, the goals being shared around by a dynamic forward line.

An interesting sub-plot to the season was the inclusion in the squad of Lindy Delapenha, the first Jamaican to have ever played in English football. Having fought for the British army in the Middle East at the tender age of sixteen, Delapenha had been spotted while playing for an army representative XI and offered a trial at Arsenal. The Gunners eventually decided against signing the Jamaican right winger, but Jackson was more than happy to bring him to the South Coast in the April of 1948.

By all accounts an technically excellent footballer, Delapenha is believed to have been only the second ever black player to have joined an English club (Arthur Wharton being the first) and went on to become on of the most prolific goal scorers of the 1950s during his time at Middlesbrough where he briefly played alongside the great Brian Clough.

A second consecutive title followed in 1950, Jackson’s team drawing in record crowds of over 50,000 at Fratton Park as their popularity continued to grow. However, the manager departed the club in 1952 to take the job at Hull City, Portsmouth struggling to achieve the same levels of excellence under new boss Eddie Lever.

The club may have never again quite reached the heights it attained in the late 1940s, but its fans can look back fondly on those few years when Pompey most certainly “played up”.