Published in the News on Wednesday 18 April 2012 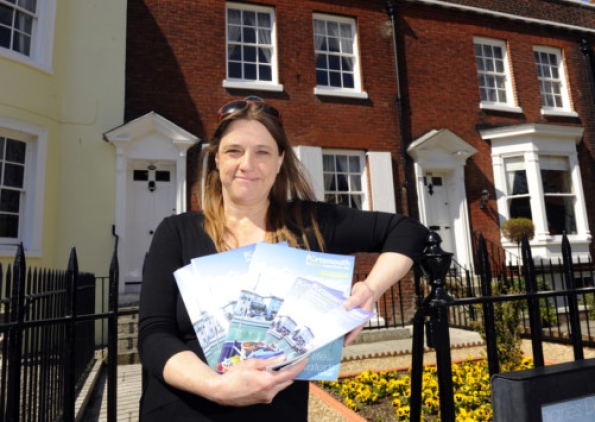 Jane Singh sits in one of Portsmouth’s most iconic buildings and looks delighted.

As Portsmouth’s visitor services manager, she’s always pleased to visit Charles Dickens’ Birthplace Museum, which brings visitors from all over the world.

But now the house – a site of pilgrimage for Dickens fans from as far afield as Russia and China – is representing a new boom in Portsmouth tourism.

Events like Dickens 2012 – the bicentenary of the author’s birth – are part of the reason why the city is raising its game as an international tourist destination.

Visitor numbers and the amount they spend in the city are rising and more national and international journalists are writing about Portsmouth. A recent review in the Daily Mail enthused about the city becoming ‘a sophisticated short break destination’ and talked about Portsmouth’s ‘fascinating’ history and seaside ‘elegance.’

Sitting in the room that houses the death couch of Portsmouth’s most famous son, Jane explains why good old Pompey is attracting ever more tourists and is fast becoming city break territory.

‘It’s been a big year for us with Dickens 2012. Each time we have something like this we make the most of it, getting as many mentions on different websites and in the press as possible.

‘This year it’s been about expanding from our maritime heritage. While we’re very proud of that, we’ve been broadening people’s perceptions of Portsmouth, showing them what a rich literary heritage we have.’

But Jane, who lives in the city, is delighted that the reviews cover Portsmouth’s pulling power beyond the literary trail.

‘It’s fantastic to read that someone feels like that about the city. We have so much to offer – history, a wonderful seafront, great shopping at Gunwharf and Southsea and fantastic views from the Spinnaker Tower, and we can really build on that.

‘I don’t see why we can’t compete with the major European cities for visitors.’

Tourism is a big deal for the local economy. In 2008 the value of tourism was put at £471.2m, but by 2010 that had jumped to £550.5m – a figure that represents expenditure by tourists as well as expenditure that is passed on to further businesses as a result of tourism. And it’s an industry that employs more than 10,000 people in this area.

The tourism team works hard to keep visitors happy and informed. And at its core are the people who market the city to the outside world.

Anyone who has travelled to London may have noticed posters in the Underground promoting Portsmouth. The latest campaign told travellers in the capital exactly where Charles Dickens was born.

The Visit Portsmouth website has recently had a major revamp and the tourist industry is improving its social media presence. The Portsmouth marketing team attend media events and work closely with Visit England and Tourism South East to ensure a presence at trade fairs.

Leaflets and brochures promoting Portsmouth are being distributed around major Olympic venues this year.

Portsmouth is now attracting cruise liners and the team is working with them to make sure passengers have a good look around the city. Creative ideas include placing experts from the museum service on Brittany Ferries where they can pass on fascinating facts to a captive audience.

The trick now, says Jane, is to encourage more people to take pride in their city.

‘Sometimes it is difficult to see where you live as a popular tourist destination. We want to make sure people in service industries are showing plenty of hospitality to tourists.’

The council is working with Tourism South East to offer training in local history to businesses. This could extend to taxi firms and shops.

Steve Pitt, chairman of Portsmouth’s Culture Partnership – an advocate for cultural matters – also hopes more local people will seek out what their city has to offer.

‘We are doing well attracting people from outside the city, but we need more people to access and support what is on their doorstep, ’ he says.

Like all industries, the tourism sector has faced budget hardships. But Jane and Steve say organisations are facing challenges by pulling together and coming up with creative initiatives.

The bicentenary of Charles Dickens’ birth continues to be marked through the year with events and offers.

Guided walks in the city cover the area where the Dickens family lived and worked. At the City Museum, the exhibition A Tale of One City, which explores the link between Dickens and life in Portsmouth, runs until November.

To mark the 200th birthday, entrance to the Charles Dickens Birthplace Museum in Old Commercial Road is free to Portsmouth library card holders until November 4. For information on events go to charlesdickensbirthplace.co.uk and visitportsmouth.co.uk

Portsmouth’s next big anniversary will mark 30 years since Tudor warship the Mary Rose was raised from the Solent seabed.

The anniversary is in October and the aim is to open the new £35m Mary Rose Museum, under construction at Portsmouth Historic Dockyard, in late 2012.