Michael Appleton has revealed Chris Maguire had been set to make a Pompey loan return. But the switch was scrapped on Sunday after the striker damaged medial knee ligaments while training for Sheffield Wednesday.

Last season Maguire was a highly-popular figure at Fratton Park with three goals in 11 matches. This summer he was transferred from Derby to the Owls, only to feature just once in the Championship for his new club. That prompted Dave Jones to agree to an initial one-month loan deal – only for injury to intervene.

As a result, Appleton recruited Scott Allan at the 11th hour to replace Wes Thomas.

But the loss of Maguire comes as a major blow. He said: ‘We had everything lined up with Sheffield Wednesday. ‘They were more than happy for him to come. ‘He was training there Sunday morning and was due to meet us at the hotel on Sunday night. ‘Then he turned quite sharply in one of the sessions and has done his medial ligament.

‘I am not sure how bad it is but when I spoke to him on the phone yesterday afternoon after a scan, they think it is going to be around the six-week mark. ‘That pretty much sums up the luck we are having at the minute.

‘Chris has not played a lot of football at Wednesday and we have been trying to do this for a while but they have not wanted to do it. ‘We kept asking, kept pestering and they were happy to do it as long as the lad was. ‘I spoke to him and he was desperate for it to happen.’

Chris Maguire will be unavailable to play in the crucial match against his parent club Derby.

Chris Maguire was outstanding against Crystal Palace.. Playing out of position on the right-side of midfield, his pace and work rate was phenomenal. He is going to be a huge miss on Saturday. 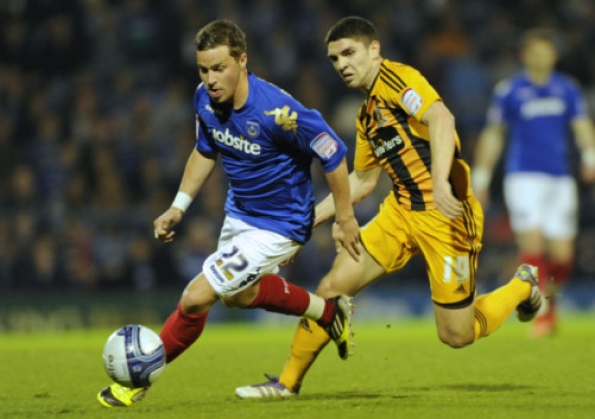 Chris Maguire insists his confidence is growing with every appearance after extending his loan deal at Pompey.

The 23-year-old Scotland international has been a useful addition for the Blues in recent weeks, scoring twice in six appearances since his move from Derby County.

And after signing an initial one-month loan deal, the striker sealed an extension yesterday that will see him in the Pompey ranks for the remainder of the season.

But he will miss the home clash against his parent club on April 21 under the terms of the agreement.

After being given his opportunity for regular first-team football by Blues boss Michael Appleton, Maguire is keen to repay the manager’s faith.

Maguire said: ‘If you ask any player, confidence is a big part of their game.

‘You need games under your belt to show people and the more you play and get picked, the better your confidence.

‘At the moment, I am getting that confidence and I want to repay the manager.

‘I have to thank the manager for giving me that opportunity.’

While some players might have chosen to avoid the current situation at Fratton Park, Maguire has shown in his short time at the club he is ready to battle for the cause.

He said: ‘I wouldn’t have come here if I didn’t enjoy this challenge.

‘I knew it was a tough situation before I arrived but I’ve come here to work hard and not accept defeat.

‘Every game is coming quickly and I’m loving every minute of it.

‘I want to show people I want it just as much as everybody else.

‘Hopefully I can show that fight in me for the rest of the season.’

PHOTO: Chris Maguire celebrates after scoring against Southampton away in a 2-2 draw. 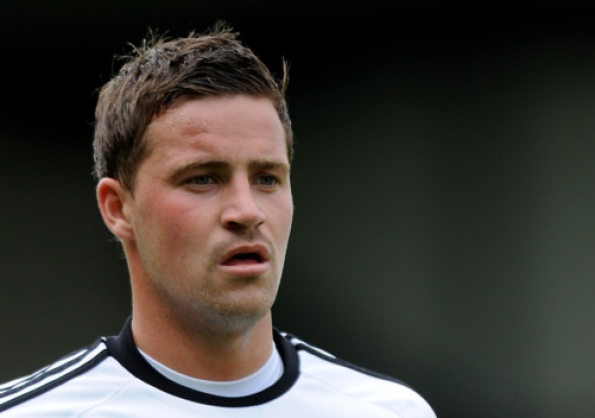 The  23-year-old Scotland international, who joined Derby from Aberdeen last summer, has played eight games and scored twice, including one goal against Portsmouth in October.

Derby manager Nigel Clough said: 'His first-team chances have been limited this season. He's still a young player getting to know this division and we believe the loan move will be a good thing for him to get some more experience of English first-team football.'