FORMER fans’ favourite Darren Moore says he would be happy to back the fans’ takeover of Pompey.

The tough-tackling centre-back made more than 50 first-team appearances for the Blues from 1999 to 2001 and admits he was gutted to see the club suffer relegation to League One.

He still has connections to Portsmouth and works alongside Pompey hero Linvoy Primus in the Faith and Football charity.

The 37-year-old said: ‘First and foremost, I was gutted to see relegation to League One but it’s more important to sit back and draw breath see if further news emerges on the current situation at the club.  ‘Where does it go from here? ‘We all need some sort of direction of where the club is at. ‘In League One are there going to be further punishments? No-one really knows or understands.

‘As a former player I am disappointed to see what’s happening. It’s a wonderful club with wonderful people. ‘When it rebuilds itself the fundamental mistakes must not be repeated again. ‘One thing that’s certain is that the fans will stay loyal to the club, come what may, which is great for Portsmouth Football Club.’

He said he was impressed by the Pompey Supporters’ Trust’s plans to take over Pompey through its community share scheme.The scheme calls on fans to make an initial pledge of £100 before having the chance to acquire a full share in the club for £1,000. Current Pompey stars have already given the scheme their backing, including goalkeeper Jamie Ashdown, David Norris and Joel Ward.

Darren added: ‘It’s a great idea because it’s the fans’ club. They have supported it through thick and thin. ‘It’s their drive and it can only be a good thing for the fans to buy it. It shows they have been pro-active and preparing for a rainy day. ‘Let them have the opportunity of running it and making tough decisions.

‘I would buy a share in Pompey if it’s the case of helping it to survive and move it forward. I would be 100 per cent happy to do it. ‘We don’t want a club of Pompey’s size, history, fanbase and tradition to go out of business. You don’t just have to be a Pompey fan, you can be any fan. ‘As fans we are in the same business – we love football and Pompey adds to the kudos of football.’

Darren spent five years with West Bromwich Albion after making the move from Fratton Park in 2001 before switches to Derby County, Barnsley and Burton Albion.

He added: ‘I had a great time at Fratton Park. ‘Even though the move to West Brom worked out for me, I was still connected to Pompey and had a rapport with the fans – I got on well with them. ‘Just before the move I was getting into it. I remember going to get on the bus to Grimsby when the manager Graham Rix told me I was going to another club.

‘Just as I left Linvoy came to the club and we all know the success he has had there. ‘I really appreciated the fans and still have a lot of great memories.’

Darren is currently taking his coaching badges, which he hopes to complete in June, 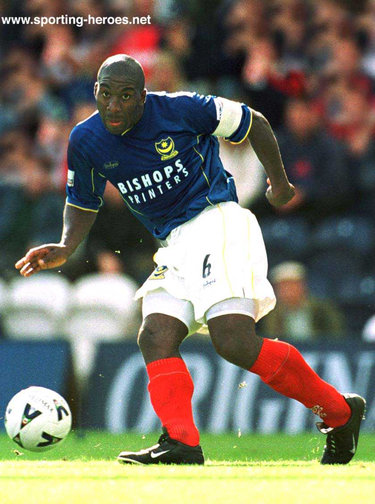