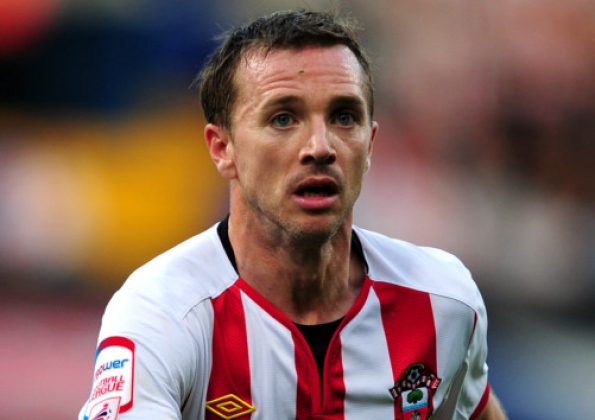 Pompey have completed the signing of free agent David Connolly and have shown Izale Mcleod the door.

The former Republic of Ireland striker has joined on an initial one-month deal and is waiting to discover if he will be given clearance to make his debut at Swindon on New Year’s Day.

Connolly has been training with the club but started his career at Watford, before moving to Holland with Feyenoord.

He since enjoyed spells with Wimbledon, West Ham, Leicester, Wigan and Sunderland before his stint with Southampton, which ended in the summer.

But with 41 caps for the Irish, the striker should add some real quality to the side.

McLeod, meanwhile, has left by mutual consent two weeks before his contract was up.

The 28-year-old scored 11 goals for the club but picked up a fifth yellow card of the season in the defeat to Yeovil and is banned for the Swindon game.

He has been heavily linked with a move to MK Dons.

Pompey are weighing up a January move for David Connolly.

The former Republic of Ireland striker has been without a club since he was released by Southampton in the summer.

But he has been training with the team and Guy Whittingham has confirmed he is considering offering the 35-year-old a deal.

It will depend on the club’s finances and ongoing squad restrictions.

Whittingham is desperate to boost the firepower in his ranks.

He is keen to bring in at least one new striker – and is also on the trail of another unnamed target.

But the caretaker Blues boss was coy on the prospect of signing Connolly, who is a proven goalscorer and has netted 158 career goals in a distinguished career in England and Holland.

Whittingham said: ‘He has been training with us.

‘We are looking at him and assessing his fitness.

‘Nothing has been agreed as yet but a lot will depend on what else happens.

‘We will have to see what happens with that one and see which other players might be leaving.’

Supporters would surely quickly forgive his Southampton connections if he comes in and scores goals.

Those same fans made their feelings clear to McLeod, however, in what is likely to have been his last Pompey game in the 2-1 defeat to Yeovil.

The striker – who is believed to be a target for MK Dons – was booked in the first half for dissent.

He is consequently banned for tomorrow’s League One clash at Swindon.

His half-time substitution was also cheered by home fans.

It seems Whittingham has lost patience with the former Barnet man, with some scathing comments about his costly yellow card.

The Blues boss said: ‘It’s looking likely that Izale will leave – I haven’t had any confirmation, though.

‘I’m sure there are a few clubs out there who are interested because he’s got a good goalscoring record.

‘But him getting banned like that is not good enough.

‘His last three bookings have been for dissent. He’s now going to miss the Swindon game and we were struggling anyway because Paul Benson can’t play.

‘Izale knew that, so that is certainly not pleasing.

‘You can accept people getting wound up every now and again and getting booked for dissent but not his last three – that is not right.

‘He’d had a go at the referee earlier and I stepped up to tell him to be quiet and then he had another go for Paul Benson being knocked over in the box.

Asked if he had words with McLeod at half-time in the dressing room, Whittingham replied: ‘No. There were far more important things to talk about at half-time than why I was taking Izale off.’