The midfielder, who scored a dramatic equaliser in Pompey’s 2-2 draw with Southampton, this week expressed his intention to stay with the Blues despite suffering relegation to League One.

It comes after Zoe Ashdown, the wife of goalkeeper Jamie, urgedPompey players to follow her husband’s lead and sign up to the scheme.

Pompey Supporters’ Trust spokesman Scott Mclachlan said: ‘We are delighted that David has decided to help out the club and the trust in its bid to save Pompey.

‘We hope this inspires many more fans to back the bid.’

‘We must give much thanks to Zoe Ashdown for her work in talking to the players and outlining what this means and how they can help.

‘I’m sure she will persuade more players to sign up in the coming days, which will be fantastic and shows that we are all in this together with our love for Pompey and share the fear it may disappear in the next fe weeks.’

Zoe said: ‘The players already had it in the back of their minds and it was a matter of getting the paperwork in front of them and put their signatures down.

‘It’s a no brainer really – no one wants to see the club go under and having been here for so long it’s important for me and Jamie.

‘The players want to raise awareness and we are just doing our bit to do that too.’

To find out how you can sign up to the trust’s scheme to buy the club, visit communitypompey.co.uk

David Norris 'I want to stay' - despite relegation

David Norris wants to be part of Pompey’s rebirth after their relegation was confirmed.

The Blues midfielder admitted he doesn’t want to jump ship – despite the club heading for League One next term. 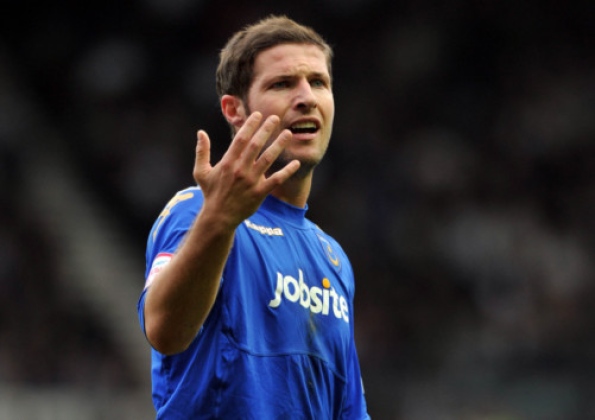 Pompey will be playing in the English game’s third tier for the first time in 29 years next season – provided they are not liquidated – after Saturday’s results.

But Norris has vowed he wants a key role in the club’s bid to bounce back into the Championship at the first attempt.

The 31-year-old believes the key is for Pompey to find stability off the pitch to allow the club to grow again.

Norris said: ‘Of course I want to play here next season.

‘I’m so settled here and happy.

‘It’s a great place to play and I want to be part of taking the club the other way. That’s what I came here for.

‘I want to make Portsmouth successful again and I still want to be a part of that – whatever league we’re in.

‘It’s important to get things right off the pitch and almost start again.

‘The most important thing is to get owners – sensible owners.

‘I haven’t overly thought about it, and I’m not sure if the decision will be my hands, but I would like to be part of turning this club around and getting it back on its feet again.

‘That would be good, especially with these fans.

‘We could make ourselves heroes by doing that and it would be good to be part of that.

‘When I came here I wanted to be part of something – and I still think that can be the case.

‘The main thing now, once the season is out of the way, will be planning to come straight back up.

‘That’s what the manager will be looking at.

‘We need to get it right off the pitch first, though. That’s the aim.’

Norris paid tribute to the loyalty shown by Pompey fans through a tough campaign.

He pointed to the 10-point deduction for going into administration as key to Pompey’s demise.

But the former Ipswich midfielder also looked to dropped points in the final weeks of the season as a major factor in relegation.

He said: ‘I’ve never known anything like the fans.

‘They are unbelievable, they really are.

‘A lot of people say about their fans and how good they are, but they are something else here.

‘I’ve never known fans like them in my career.

‘To give us support like they have when we’ve let them down on a few occasions, and to be out there like they were when we were relegated, was unbelievable.

‘Pride-wise, we can say it wasn’t just down to us on the pitch.

‘It wasn’t just that. It was the escalation of losing players, not being paid and how that affects the mindsets of everyone.

‘I don’t think the effort of the players could be faulted.

‘But at the same time, I think we will look at it and think “what if?”.

‘I don’t think our run-in was terrible, and I think there were definitely games where we could have done better and picked up more points.’

April 21, 2012 David Norris dismayed at the loss against Derby and resultant relegation

Pompey were trailing in the final few minutes against Derby when the news filtered through.
Bristol City had beaten Barnsley meaning in August the Blues will be playing third-tier football for the first time since 1983.
It was a sombre moment with fans reflecting on a dramatic campaign both on and off the pitch.
Or at least it would have been anywhere else but Fratton Park.
Pompey fans responded to the news with gallows humour – singing ‘Que Sera, Sera’ but substituting Wembley for Shrewsbury.
The final whistle was not met by a chorus of boos as it might have done at other stadiums around the country.
Instead the fans applauded their heroes off, then stayed behind to watch the players return to the pitch for a lap of appreciation.
And it is that level of support that David Norris believes makes the Fratton faithful the best fans in the country.
He said: “I’ve never known anything like it. At lot of people say that about their own fans, but ours are something else.
“I’ve never seen fans like it in my career. To give us the support they have when we’ve let them down on a few occasions is unbelievable.
“It’s my first experience of being relegated and it’s with a football club that doesn’t deserve it.
“It’s a shame we couldn’t beat Derby. We got level and it looked like we might kick on and get a win, which would have been nice, but wasn’t meant to be.
“It’s not the first time this season where we’ve got ourselves back in the game and let ourselves down within five or 10 minutes to go.”
Without their 10-point deduction for entering administration in February, Pompey would – barring some freak final-day results – have beaten the drop.
That provides some consolation for Norris, although the midfielder is still smarting about some results earlier in the season.
He said: “I don’t think our effort can be faulted, but we will think ‘what if’. I don’t think our run-in was terrible – there were games where we could definitely have done better.
“There were matches like Bristol City at home and Coventry away where we could have picked up more points.
“But we’ve had a good go and we’ve taken it to the last home game of the season.
“When our form was so up and down we set ourselves a target of making sure that we would have stayed up without the 10-point deduction.
“We can say it wasn’t just down to us on the pitch. We’ve had 10 points taken off, players not being paid and also losing players.
“But I’ve still enjoyed the season. The off-field stuff hasn’t affected the lads in the dressing room too much. I’m so settled and happy here – it’s a great place to play.
“It’s important to get things right off the pitch – to get sensible owners. But keeping the gaffer is also important for this club.”