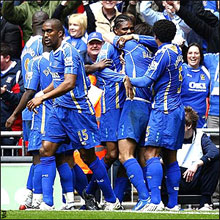 So the most exciting and unpredictable FA Cup in previous years draws to a close. With the plucky exhorts of Havant and Waterlooville, Barnsley and Chasetown still fresh in the memory, the stage was set for a memorable finale. Unfortunately, the first FA Cup final without any of the so-called ‘Big 4’ since 1991 was a nervy affair won by a single goal.

Portsmouth, playing in their first final since 1939, started slowly with the emphasis on defending and holding up the play, much as they did in the semi-final against West Bromwich Albion. It’s a tactic which has worked so well in the Premiership this season, propelling them firmly within the top half of the table. Up against the gutsy determinism of a Championship side such as Cardiff however, it doesn’t always work. The first half was certainly dominated by the Welsh team who nearly nicked a goal early on through striker Paul Parry who saw his quick shot blocked by England goalkeeper David James after a defence-splitting pass by Joe Ledley. At the other end Portsmouth simply couldn’t get hold of the ball, with lone striker Kanu not having anyone to feed off.

For all Cardiff’s early dominance they simply couldn’t forge a decent chance, let alone get a sniff of goal, a price which West Brom ultimately paid in the semi-final. Portsmouth pressed forward, their class starting to shine through as Kanu came closest, hitting the outside of the post with the goalmouth gaping at him. Moments later, Utaka’s crossed was too fierce for on-loan goalkeeper Peter Enckelman who spilled it straight towards Kanu. The Nigerian’s quick reaction from one yard out proved to be the pivotal point in the match after only 37 minutes.

Cardiff continued to lay siege upon Portsmouth’s defence which stayed strong, much as it has all season. The fact that Pompey have not lost this season when they’ve struck first seemed to be proved once again as Loovens saw his lobbed goal disallowed for handball on the stroke of halftime. As a result, it was a different Cardiff side that emerged for the second half, knocking the ball about in defence in an attempt to draw the leaders out of their half. Portsmouth remained strong and soaked up any pressure thrown at them, and attempting to capitalise on the break, notably through substitute David Nugent who saw his shot from a wide angle blocked by Enckelman. Cardiff never looked like getting out of second gear, Jimmy Floyd Hasselbaink especially, who seemed to spend more time on the floor than on the ball. Late substitutes Trevor Sinclair and the young prodigy Aaron Ramsey sparked an injury time scramble in the box, but ultimately the assured defending of James, Campbell, Distin and Hreidarsson proved too strong.

So the cup goes to Portsmouth for the first time in 79 years; and a fantastic win for manager Harry Redknapp after his off-field troubles last year and his brillaint management of Portsmouth which has pushed them forward in recent years. As an added bonus European football will be played for the first time ever next season at Fratton Park, a deserved accolade for the team who conceded only one goal in the whole competition. It is a refreshing change from the dominance of the big-spenders from the Premiership and a fitting end to the 2008 FA Cup, despite the final not quite living up to the expectations of the nation.