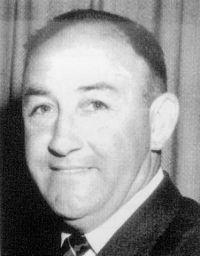 Born in Reading, Berkshire, Cox signed as an 18-year-old for Tottenham Hotspur in 1938. A tricky and talented winger who usually played on the right, he made his Spurs debut in a Second Division match against Swansea Town in November 1938. However, soon after he broke into the first team, the Second World War broke out and all competitive football was suspended. Cox served as a fighter pilot for the Royal Air Force (while in his spare time guesting for his hometown club Reading), and was awarded the Distinguished Flying Cross. After peace broke out, Cox returned to Spurs and played another three seasons for them before moving to their North London rivals Arsenal for £12,000 in September 1949.

Cox made his Arsenal debut straight away, on 7 September 1949 against West Bromwich Albion and became an immediate regular in the Arsenal side. Cox's efforts were most evident in the FA Cup. In the semi-final, against Chelsea, Cox scored the first goal in a 2-2 draw, and went on to score the only goal in Arsenal's 1-0 victory in the replay. In the final, against Liverpool, Cox laid on a cross for Reg Lewis to score the only goal of the game, winning the Cup for Arsenal.

Two years later, Arsenal again played Chelsea in the FA Cup semi-finals, and again Cox proved crucial – he scored Arsenal's goal in a 1-1 draw, and in the replay he scored twice as Arsenal ran out 3-0 winners. However, the 1952 final was not to be a repeat of two years earlier; against Newcastle United, an injury-ravaged Arsenal side playing most of the match with ten men (after Walley Barnes was stretchered off) lost 1-0.

Despite these cup exploits Cox was never an ever-present in the Arsenal side; he first faced competition from Ian McPherson for the right-wing spot, and then the talented youngster Arthur Milton. After only managing nine matches in the 1952-53 season for Arsenal he sought pastures new and was transferred to West Bromwich Albion to become player-coach. In all he played 94 matches for Arsenal, scoring 16 goals.

Cox only played four matches for the Baggies but remained in the coaching staff as assistant to Vic Buckingham. In 1956 he moved on to Third Division South side Bournemouth to become manager; Bournemouth fare reasonably steadily in the league, and pulled off a giant-killing feat in beating Spurs in the FA Cup in 1956-57.

In 1958 he moved along the coast to become Portsmouth's manager. Cox's era was to be one of controversy and acrimony and positively disastrous.

His first season 1958/59 was calamitous, with relegation from the top flight (Division 1) following a miserable 20 defeats in the last 24 matches, and only 21 points secured for the whole season. The fall into Division Two brought no respite and in the second season in the lower league Cox was dismissed in February 1961.

After a spell out of football, Cox took up the reins at Fourth Division Gillingham in 1962, and had an immediate impact – taking a side that had finished 20th the previous season up to fifth place (missing out a promotion place on goal average). Cox's Gillingham side became renowned for their defensive discipline and unadventurous style, and the following season, 1963-64, Cox's Gillingham finished top and won promotion to the Third Division. The next season they started well and looked set to win a second successive promotion before slumping late on and finishing seventh. Cox resigned just before Christmas 1965 and rejoined his old club Bournemouth, who were also in the Third Division. After finishing as high as fourth in 1968-69, Bournemouth were relegated in 1969-70 after his old club Gillingham won on the last day of the season, condeming the Cherries to the drop instead. Cox was sacked that summer and never worked in football again. He died in 1973, aged 52.