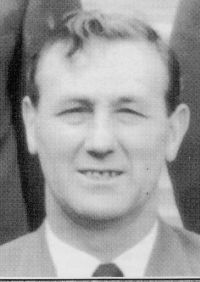 The appointment of George Smith in April 1961 came too late to save Pompey from relegation and a return to Division Three after 37 years. The outspoken, often controversial, Smith was one of the best coaches in the country and was known for his strict discipline and 'commando-style' form of training.

Smith stabilised the club and with some inspired signings, wingers Tony Barton and Dave Dodson in particular, gained promotion at  the first attempt under the captaincy of the seemingly ageless Jimmy Dickinson.

37-year old Dickinson played his 600th league appearance that season and compensated for his age and lack of speed with his unique positional sense and anticipation. Smith's arrival had revived a previously depressed and dispirited club and his coming had been the spur that encouraged Dickinson to play on and head towards the record books.

Pompey fans regularly had to settle for a mid-table place in the Second Division through the 1960s, without the resources or ambition to go further.

Centre-forward Ron Saunders was an outstanding goalscorer amidst the mediocrity and before he was surprisingly sold to Watford in September 1964, he had recorded 145 league goals in just 236 appearances.

As he approached his 40th birthday, Dickinson announced that he would retire at the end of the 1964/65 season and it was a dramatic finale. Pompey had struggled all season and in the very last match away at Northampton at least a point was needed to survive. Curiously the league had allowed the match to kick-off at 7.30 p.m. in the evening, by which time Pompey knew what was required.

The team were a goal down at the County Ground with just six minutes remaining due to an own goal from forward Johnny Gordon, but a last-ditch equaliser came from full-back Alex Wilson who had only scored one other goal in a long career, allowing Dickinson to be chaired from the pitch in triumph on his retirement after a playing career spanning 20 years and 764 league appearances.

Smith was intent on revolutionising the way the club was organised and disbanded the reserve and youth teams, leaving a first team squad of just 16 players. Savings of £20,000 annually were projected as Smith explained that, "there was nothing but fish in the sea around Portsmouth".

The first revolutionary season brought another now regular mid-table position, but 1966/67 was notable for an exciting FA Cup run. A marathon three-game tie against Hull City included an astonishing 33,107 Fratton Park crowd which highlighted the club's potential, and over 15,000 fans traveled to White Hart Lane to see an inspired Spurs dash Pompey's hopes.

In the following season, 1967/68, gates were regularly topping 20,000 at Fratton Park and it was all down to a nine-match unbeaten run up to September which brought top of the table status. Close to Christmas more than 35,000 fans saw Pompey beat their then main rivals Blackpool 3-1 in the most memorable match of the 1960s.

However, despite the signing, for a club record £40,000, of striker Mike Trebilcock, Pompey's challenge faltered. The new striker did not score the required goals and just three wins in the last 13 league games meant that the expectant Fratton fans had to settle for a disappointing fifth place.

Local boy Ray Hiron was top scorer in the following season with 17 goals, but again Pompey finished in mid-table.
By now the pressure on Smith was growing as fans stayed away and attendances plummeted to 10,000 levels. The first-team squad system had failed to have the desired effect and at the end of the 1969/70 season Smith was 'moved upstairs' to become General Manager and Ron Tindall, a former player, assumed control of team affairs.