George Thorne returns to West Bromwich Albion after serving Pompey well during his stay on loan.

Below a picture of George Thorne in action against Bristol City on March 17, 2012 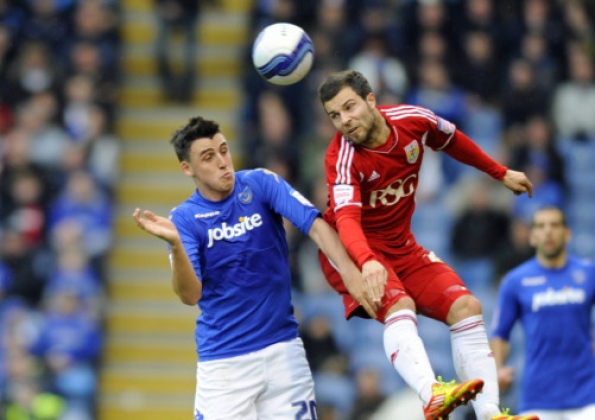 It was unlikely that Pompey’s on-loan midfielder would be fit enough for Saturday’ South-Coast derby, but few thought that George Thorne’s ankle injury, suffered in Saturday’s 5-1 defeat to Burnley, would rule him out for the season.

Thorne limped off the Fratton Park pitch with nine minutes to go on Saturday, replaced by Luca Scapuzzi, and the club have now announced that the 19-year-old will need to return to his parent club, West Bromwich Albion, to receive treatment and start rehabilitation.

The youngster has impressed during his Pompey stay, originally joining in November, shortly after manager Michael Appleton’s arrival, along with fellow West Brom loanee Joe Mattock. Since then Thorne had to go back to West Brom briefly due to his parent club’s injury worries, but returned to Fratton Park for a second loan spell – making 14 appearances up until now.

Thorne has proven to be a key part of Pompey’s midfield, especially with the departures of Hayden Mullins and Liam Lawrence, starting all ten games during his second spell, and he will be sorely missed by everyone at the club.

Greg Halford said on Twitter: “Gutted to see @GeorgeThorne29 go back to West Brom – been very good for us this year.”

Fellow loan midfielder, Scott Allan added: “Gutted for @GeorgeThorne29 will be a big miss for us! See u in Birms soon my mate!”

Whilst Thorne himself thanked the club for all their support: “Would like to thank everyone at Portsmouth FC – Staff, players & fans for a second great experience! Appreciate all your support & wish you all the best! I’ll be looking out for the results. Especially a win vs the Scummers on Saturday!!! #PUP“

It’s clear Thorne has caught the Pompey bug, and as we prepare for a massive game on Saturday, he will be a massive loss, but may see Kelvin Etuhu returning to the starting line-up.

We’d like to thank George for all his hard work since joining Pompey on-loan and we wish him a speedy recovery back at The Hawthorns!

Pompey’s battle against the drop has been dealt a blow after George Thorne was ruled out for the rest of the season.

The midfielder, on loan from West Brom, left Fratton Park on crutches after suffering an injury to his left ankle during Saturday’s 5-1 loss to Burnley.

Blues boss Michael Appleton had been optimistic Thorne’s injury was not serious.

But the 19-year-old will now play no further part in Pompey’s fight for Championship survival.

Appleton said: ‘There’s no chance of him (Thorne) playing again this season.

‘It’s a blow. He’s been outstanding.’

After returning to the club for a second loan spell in February, Thorne initially took time to find his feet but had been in fine form before his injury last weekend.

Pompey will not be allowed to bring in another loanee to replace Thorne as the emergency loan window is now closed.