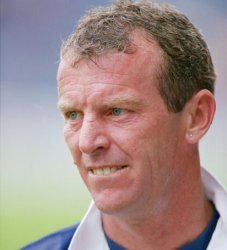 Graham Rix managed Portsmouth between 2001 and 2002, where his enthusiastic style of management started well, but tapered off in the middle of the 2001/02 season.

A string of poor results, including a 4-1 home loss in the F.A Cup to bottom of the Football League Leyton Orient, meant that Director of Football Harry Redknapp was given more responsibilities until eventually, Redknapp replaced Rix as team manager toward the end of the season.

Graham Rix (born October 23, 1957) is an English former football player and coach. He is currently unemployed, having been sacked by Heart of Midlothian F.C. on 22 March 2006.

Originally from Doncaster, Yorkshire, Rix joined Arsenal as an apprentice in 1974 and turned professional the year after. He made his debut for the club against Leicester City on April 2, 1977, and marked it by scoring the opening goal. Rix immediately became a regular on the left wing, replacing George Armstrong. Together with Liam Brady he formed part of an impressive attacking midfield, which helped Arsenal to three successive cup finals between 1978 and 1980. Arsenal only won one of these, in 1979 against Manchester United; the final score was 3-2, with Rix crossing for Alan Sunderland's last-minute winner, just seconds after United had equalised to level the score 2-2.

Arsenal reached the Cup Winners' Cup final the following season, against Valencia; the match finished 0-0 after extra time - a penalty shootout ensued, but Rix missed his kick and Arsenal lost. After the departure of Liam Brady to Juventus that summer, many believed Rix would also leave but he stayed at the club, and became captain in 1983. Arsenal's form slumped in the early 1980s, though, meaning Rix was unable to claim any silverware as skipper.

A series of injuries to his achilles tendon kept Rix out of the team in the mid-1980s, and he lost his starting place in the side to Martin Hayes. Rix spent a spell on loan at Brentford, before being released in 1988. In all he played 464 times for the Gunners, scoring 51 goals. After leaving the London club, Rix spent time at French clubs Caen and Le Havre, before finishing his playing career at Dundee in 1993.

Rix joined Chelsea as youth team coach in the summer of 1993; during an injury crisis, he briefly enlisted as a player for the club, playing a solitary Premiership match in May 1995 against his old side Arsenal. Rix became assistant manager in 1996 under new Blues boss Ruud Gullit, and continued in the same role under Gullit's successor Gianluca Vialli, winning the FA Cup in 1997, and the League Cup and Cup Winners' Cup in 1998.

In March 1999, Rix was sentenced to twelve months in prison, for having underage sex with a 15-year-old girl ([BBC]); upon his release from prison six months later he immediately rejoined Chelsea in his old job.

He won the FA Cup again in 2000 before leaving the club after Vialli was sacked by Ken Bates.

Rix managed Portsmouth between 2001 and 2002, before he was sacked in favour of Director of Football Harry Redknapp.

Oxford: Masterminding a fall from grace

Rix managed Oxford United for seven months in 2004. They declined sharply during the final three months of the 2003-04 Division Three campaign - falling from the automatic promotion places to ninth in the final table and failing to merit even a playoff place. He was sacked after their dismal form continued into 2004-05.

On November 7, 2005, after speculation linking him with the Manager's job at Scottish Premier League club Hearts, it was confirmed that Rix would take over at Tynecastle. He officially took the position of head coach on November 8 2005. Hearts has stated that a Director of Football with responsibility for signing new players will be appointed shortly. Rix was reported as saying he "will be happy to have someone else buying and selling his players." He states, "My forté is working with the players, motivating them and hopefully winning matches. Dealing with agents and the press does not really interest me."

Events reported in February 2006, by Scottish newspapers, suggested that Rix was unhappy with Vladimir Romanov's "hands on" approach and speculation increased that Romanov was involved in team selection.

On 22 March 2006 Rix was sacked as manager after just four months in charge with Hearts Chairman Roman Romanov stating that "Results were not what they should have been." ([BBC]).

Graham Rix is also a convicted child sex offender, having been found guilty of unlawful sex with a 15-year old girl in 1999.