Portsmouth Football Club was founded in April 1898 and a huge debt of gratitude is owed to the foresight and enthusiasm of the syndicate of five sportsmen and businessmen who met on the evening of 5th April at the offices of their solicitor at 12 High Street (in what is now known as Old Portsmouth). The meeting passed a minute proposing that land close to Goldsmith Avenue be purchased for the "proposed football club".

The club was formed out of the ashes of the popular local Royal Artillery team who had been forced to disband after a breach of amateur rules. The 'Gunners' had gained promotion to the premier division of the Southern League and their success had whetted the appetites of the local fans for first-class football.

Pompey's first manager was the experienced Frank Brettell and the club was successful in gaining immediate entry to the Southern League. The club's first league match was played at Chatham on 2nd September 1899 (a 1-0 away win) and the home debut at Fratton Park came three days later with a friendly against Southampton.

The first season was hugely successful, with 20 of the 28 league matches won, achieving a runners-up position. The Southern League championship was secured for the first time in 1901/02, by which time Brettell had been succeeded as manager by the captain, Bob Blyth. A Director, Richard Bonney, later succeeded Blyth in the post.

Season 1906/07 was highlighted by the visit of Manchester United in the English Cup and a new record gate of 24,329 was set at Fratton Park. A 2-2 draw meant a replay at Manchester and a 2-1 giant killing by the Pompey boys followed. Two seasons later another remarkable attendance of 27,825 was recorded when Sheffield Wednesday visited Fratton Park for the second round of the new FA Cup.

The 1910/11 season brought relegation to the Second Division of the Southern League and the recruitment of Robert Brown from Sheffield Wednesday as manager, but the following season saw immediate re-promotion to the top flight, but by then the club was experiencing financial crises as debts built up.

The solution was for the original company to be wound up and so the present company, 'Portsmouth City Football Club Limited', was formed in 1911. This proved to be the salvation of the club, but in fact survival was only ensured by heavy personal guarantees to the bank from the Directors and in particular Mr G L Oliver, regarded as the 'Father of Pompey'.

During this period the club had the famous amateur international full-back, A E Knight, as their captain and he was partnered by Jack Warner who gave long and sterling service as trainer on his retirement. Pompey were even aided occasionally by the legendary all-round athlete and cricketer C B Fry.

Football had been suspended during the First World War and when competition recommenced Pompey promptly won the Southern League title for the second time and were looking to secure a place in the high-profile national Football League. A Third Division had been formed and the Fratton Park club were duly elected in 1920/21.

Before the club's debut in the southern section of the new division, Manager Robert Brown had been replaced by John McCartney from Hearts. He led the club to 12th position in their first season, but sights were firmly set on the Second Division.

McCartney had boldly predicted that promotion would be secured in three years and sure enough Pompey finished top of the 1923/24 table. The signing of centre-forward Willie 'Farmer's Boy' Haines was crucial and he scored 28 goals in 31 league matches to give notice of the legendary scoring feats to come. Much credit also went to forwards Jerry Mackie and David Watson and defenders Harry Foxall and Jock McColgan.

The season 1926/27 was one of the most momentous in the club's history with promotion to the elite First Division dramatically gained on the last day of the campaign. The purchase of winger Freddie Forward in February 1927 changed things when he struck up a productive partnership with both Mackie and the predatory Haines, who scored an astonishing 40 goals that term. On the other wing Welsh international Freddie Cook was a great success and the half-back line of Reg Davies, skipper and centre-half Foxall, and left-half Billy Moffatt was the strong backbone of the team.

On that last Saturday of the season Middlesbrough were already up and the vital second promotion place was to be decided between Pompey and Manchester City. Both clubs had almost identical records and were at home. City put eight goals past bottom club Bradford, but their game finished fifteen minutes before Pompey's against Preston. At that stage Pompey were 4-1 up and in those dying minutes they needed one more goal to pip City on goal average. Fittingly it was Willie Haines who popped in the goal to secure the promotion amidst frenzied excitement at Fratton Park.

Pompey were the first southern team to make it to the top division and the first to make the climb from the Third Division. McCartney's efforts had affected his health and he resigned to be replaced by the experienced John ('Jack') W Tinn from South Shields.

In the top division the astute Tinn embarked on some urgent team strengthening and the crowd's favourite Willie Haines lost his place to a young ex-miner named John Weddle, one of many great signings by Tinn. Wing-halves David Thackeray and Jimmy Nichol, full-back Alex Mackie, centre-half John McIlwaine, and inside-forward Jack Smith were other good examples.

The 1928/29 season brought a struggle against relegation, with a record 10-0 defeat against Leicester in late October. Legend has it that during the game ten swans were spotted flying over the Filbert Street ground. Nonetheless the season was hugely significant for the remarkable FA Cup run, which ended in an historic first Final appearance.

Pompey were bottom of the league when the semi-final against Aston Villa was played, but a Jack Smith goal took them through to the Final against Bolton Wanderers in April 1929. Pompey were unlucky to lose 2-0, largely due to an injury to full-back Tommy Bell which effectively reduced them to ten men. 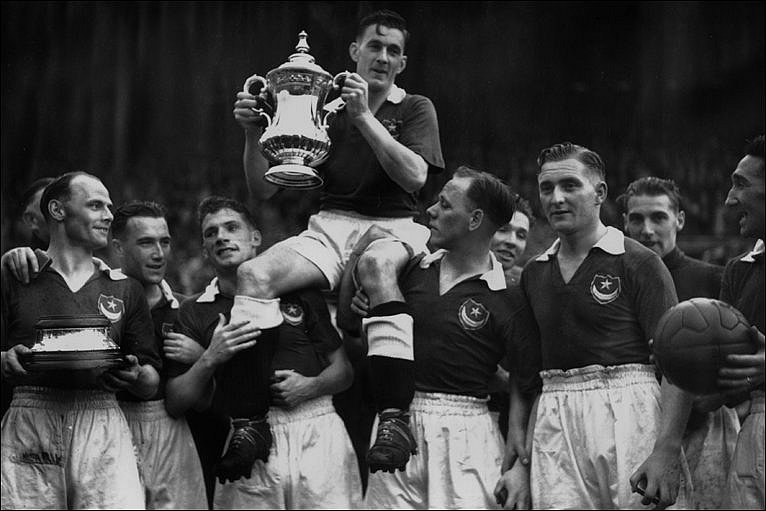 Pompey were established in the top division and in 1930/31 reached the dizzy heights of fourth place. Jimmy Allen had been installed at centre-half, Freddie Worrall, from Oldham had replaced Freddie Forward on the wing and by now Weddle had formed a good partnership with new signing Jimmy Easson, which brought 20 goals each in the following season.

A remarkable cup run in 1933/34 captivated the city. Manchester United were beaten 4-1 and Bolton Wanderers 3-0, amongst others, before Leicester 4-1 and a Jack Weddle hat-trick against Birmingham in the semi-final took Pompey to Wembley to meet Manchester City.

Again the Final turned on a serious injury and it was centre-half Allen who was a passenger for long periods, after Pompey had taken the lead through Sep Rutherford. Allen was unable to stop Manchester City's star centre-forward Tilson from notching both the goals for their 2-1 win.

Months later centre-half Allen was transferred to Aston Villa for a then British record fee of ÃÂ£10,775. The money was used to finance major development at the ground including the building a new North Stand, which stands to this day, and increased the capacity to 58,000.

Weddle continued to score prolifically, but his goals only brought mediocre league positionings. However, the 1938/39 season was to prove historic as Pompey again showed great Cup pedigree. Comfortable home wins against Lincoln, West Bromwich, West Ham and Preston took Pompey through to another semi-final, against Huddersfield Town at Highbury Stadium when, after going behind, it took two late goals from new signing Bert Barlow and Jock Anderson to take them through to their third Final.

Pompey were the widest outsiders in Cup Final history, against a highly-rated Wolves team. The whole country expected the Midlanders to find consolation at Wembley for missing out on the league title. On the day Pompey were simply magnificent and swept the young Wolves aside with a superb display. Two goals from Bert Barlow, against his old team, and others from Jock Anderson and Cliff Parker took the Cup to the South Coast for the first time at their third attempt. 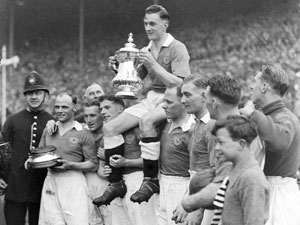 Typical of the superstitious nature of the team was the feeling that the legendary 'lucky spats', worn by manager Jack Tinn at every cup match, had brought the success. Captain Jimmy Guthrie took the Cup from His Majesty King George VI and much credit had to go the heroes such as Tommy Rowe at centre-half, Guy Wharton partnering Guthrie at half-back, inside-forwards Bert Barlow and Jimmy McAlinden and the emerging Jock Anderson at centre-forward.

Within a few months the World was at war again and Pompey took the dubious record of holding the FA Cup for the longest period.