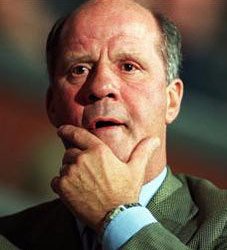 Jim Smith accepted the appointment as manager of Portsmouth in the summer of 1991. He had a fairly successful reign at Fratton Park for four years, including reaching the FA Cup semi-finals in 1992, where they took Liverpool to a replay before losing on penalties after extra time. A year later, a successful season in the league meant that they missed out on automatic promotion to the Premier League only on goal difference and then losing in the playoffs. Key players including Darren Anderton and Guy Whittingham were sold, and there was no money for adequate replacements. Smith was finally sacked in January 1995 after a decline in form left them struggling at the wrong end of Division One

Jim Smith (born October 17 1940) is a former English football (soccer) player and is now working as a manager. He currently manages Oxford United and also serves on the club's board of directors.

Smith began his playing career in 1959, when he signed for hometown Sheffield United as a trainee (though Smith himself supports Sheffield Wednesday). After failing to break into the first team he was transferred to Aldershot for the 1961-1962 season.

At the beginning of the 1965-1966 season, after scoring one goal in 74 appearances, Smith left Aldershot to join Halifax Town. He made 113 league appearances for Halifax, scoring 7 goals, before moving to Lincoln City in 1968. After a year at Lincoln in which he made 54 appearances Smith signed for non-league Boston United as player-manager.

A good start to his managerial career at Boston meant that in November 1972 Colchester United offered Smith the position of player-manager at the club.

Success came quickly as Smith guided Colchester to the Football League Fourth Division title in 1974. His performance at the club attracted the attention of bigger clubs, and in 1975 he quit the club, and hung up his boots, to join Blackburn Rovers as manager.

He led Blackburn for three years before leaving to be appointed boss of Birmingham City in 1978. Unfortunately, Birmingham were relegated from the old Football League First Division the next year. However, Smith managed to guide Birmingham back into the top flight the next season.

In 1982 Smith parted company with the St Andrews club and joined Oxford United as manager. He led them to the old Football League Third Division championship in 1984. The next year they were again promoted, this time into the top flight, for the first time in their history as Oxford won the old Second Division. Despite this spectacular success, United chairman Robert Maxwell refused to improve Smith's contract, which led to Smith's resignation from Oxford and then being offered the job of manager at Queens Park Rangers, which he accepted.

In his first year at QPR, Smith took the club to the League Cup final, but they lost 3-0 to his former club Oxford. Smith continued to manage QPR until 1988 when he left to become manager of Newcastle United. However, the following year Newcastle were relegated and failure to reverse the club's fortunes led to Smith's sacking in 1991.

He quickly bounced back and was appointed manager of Portsmouth the same year. He had a fairly successful reign at Fratton Park for four years, including reaching the FA Cup semi-finals in 1992, although the sale of key players such as John Beresford, Darren Anderton and Guy Whittingham began to have a negative effect on results and Smith left.

Smith then went into semi-retirement and became chief-executive of the League Managers' Association in 1995.

However, he returned to management that summer when offered the manager's position at Derby County. In his first full season in charge, Derby came second in the First Division (now the second tier of English football), and gained promotion to the FA Premier League. Smith was assisted by Steve McClaren, who has since found success as manager of Middlesbrough and as part of the England coaching staff.

For three seasons Derby showed impressive improvements in the Premiership, finishing 12th, 9th and 8th. However, in the next two seasons Derby narrowly avoided relegation, finishing 16th and 17th. Smith resigned at the beginning of the 2001-2002 season.

In early 2002, Smith was appointed assistant manager at Coventry City, working alongside Roland Nilsson. Though results improved after he arrived, Smith was sacked, along with Coventry's entire management team, at the end of the season.

Later that year, former club Portsmouth offered Smith a position as assistant manager to Harry Redknapp. Having accepted, Smith helped Redknapp win the First Division at the first attempt in 2002-2003, and went on to become a major part of Pompey's consolidation process in the Premier League.

In November 2004, both Smith and Redknapp resigned from Portsmouth after the appointment of a director of football. Both considered this to threaten their authority and control in team matters.

Redknapp soon became the manager of Southampton and Smith was appointed his assistant a few weeks later on December 22 2004, having previously turned down the role of chief scout. However, Southampton were relegated at the end of the season and Smith's contract was not renewed due to cost-cutting.

Smith returned to front-line management a few months later when he was appointed manager of Oxford United again in March 2006. In addition, he also became a director of the club. He was unable to save them from relegation to the Conference National, but is staying with the club for the 2006-2007 season.