PHOTO: Kit Symons back in his Pompey days

Kit Symons has spoken of his pride at his elevation to the Pompey Hall of Fame.

But the former Blues favourite joked his induction had been tainted by the fact pal and former team-mate Andy Awford had already been recognised by the club!

Symons will join Awford and a host of Fratton heroes in the pantheon of greats at this year’s ceremony in March.

He is set to be inducted along with Mick Quinn, Jimmy Scoular, Ron Saunders and Eoin Hand.

In addition, there will be a nod towards the early years of Pompey with recognition for John Weddle.

Symons admitted it was an honour to join such esteemed company.

He said: ‘I’m really chuffed to have had the call, it’s a great honour.

‘There are some real heroes in there and Pompey legends, even if there are a few mugs like Andy Awford, who dilute it slightly!

‘Awfs sent me a text saying they are letting anyone in now, when he heard. I’m hoping it was in jest.

‘Seriously, there are some fabulous names in there and it’s wonderful to be thought of even in the same breath as some of these people.

‘I had great times when I was playing at the club and loved my time at Pompey.

‘We had some ups and downs but to be part of the city and football club was brilliant for me.

‘You move away and do other things but to be thought of still is really nice.

‘I’ve still got a lot of friends in Pompey and family.

It’s quite touching to be remembered.’

Symons went on to make 192 appearances for Pompey after making the breakthrough in a 1991-92 season which will live long in the memory of supporters.

He said: ‘The FA Cup semi-final in my first full season was a massive one.

‘Obviously the club went on to have success after that but it was such a great time. People remember it fondly.

‘I remember running out at Blackburn that first season and the Pompey fans didn’t know who half of us were!

‘They had big signings and had Jack Walker’s money but we got a draw and that was when people started to notice us.

‘We were a bunch of snotty-nosed kids with a few experienced pros.

‘No-one expected anything but they were exciting times against the odds.

‘We gelled. There was the youth with a little bit of nous that was passed on to us.

‘It was a good balance. We had an excellent manager in Jim (Smith) and good backing from brilliant supporters.

‘Jim’s remit was to reduce the wage bill so his hand was forced a bit.

‘But he had faith in us and it came together.’

Symons still remembers fondly the relationship he had with Pompey and the city as a whole.

It’s a bond which remains strong.

He said: ‘It was different era and we were part of the community.

‘My mates were Pompey fans and we’d all go out together.

‘I knew all the cross-sections of the city and that was what made it fun.

‘I’ve always loved the club, the city and the people of Pompey.’ 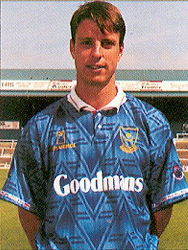