THEIR HERO MISSING AS CHAMPIONS CELEBRATE

As the Portsmouth players trooped off the field after a great victory over Bolton Wanderers, each player had a pat on the back for left-half Jimmy Dickinson, hero of a great second-half defensive action.  Thankfully the team slumped onto the dressing-room benches: "Well, it's a bit nearer the title," said one. As they finished their lemonade and prepared for a bath, the news came through - Manchester United and Newcastle had both drawn, and Pompey were champions. The players congratulated each other, but the lad who had done so much to make victory sure was not there.
In another room, Dickinson was having more stitches in a head wound which had reopened after ten minutes' play - a wound which should have kept him from the game but which he did not consider until the title was safe. Dickinson's display typified Portsmouth's title-win in their Jubilee year: fierce determination to succeed, backed by good football and team spirit. Before the match four stitches had been taken from Dickinson's wound. Club officials didn't want him to play but he insisted. At half-time it was suggested he should stay off. I'll be alright with a piece of plaster," he said.
So back he went to spur his team into the fiercest defensive action they have fought this season. Every five minutes a wet cloth was thrown to him from the touchline. Dabbing the wound, unable to head the ball, he occasionally staggered but helped blot Bolton's best wing from the game. And his spirit stopped his team wilting under constant attacks. Two points were vital," Jimmy told me, "we had to make sure and I wanted to play my part."
Said skipper Reg Flewin: "Jimmy's spirit has run through the whole team. They always put the side first."
Manager Bob Jackson, wearing his lucky bow-tie, said: "If Jimmy hadn't been there in the second half, Bolton might just have swayed the balance. We've aimed at team play. What better example than this?" 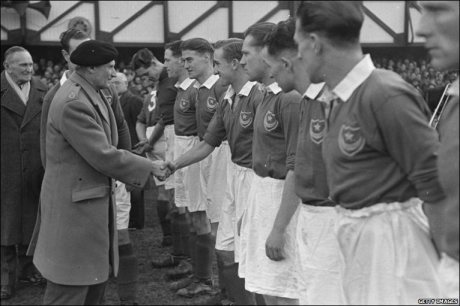 Pompey celebrated their 50th anniversary in 1948. Field Marshal Montgomery who was president of the club greeted the players before the match against Arsenal at Fratton Park, which they won 4-1.

{PHOTO: Jimmy Dickinson, who holds the all-time appearance record for Portsmouth FC, with 764 games played (1946-65), as well as 48 caps for England.}

article from the equalizer

Portsmouth’s most golden of ages came during the 1940s as they became one of the dominant forces in post-war British football.

The South Coast club’s last major title had come just months before the outbreak of conflict in 1939, a Cliff Parker-inspired Pompey beating Wolverhampton Wanderers 4-1 in front of 99,000 at Wembley (1939 FA Cup Final here). Eight years on, Portsmouth were celebrating their Golden Jubilee and hopeful of collecting some silverware despite having a squad largely bereft of senior internationals and household names.

However, Portsmouth, led by captain Reg Flewin and powered by the goals of forwards Ike Clarke and Peter Harris, started the season in superb form and went unbeaten for thirteen games before defeat at Wolverhampton towards the end of October. Adopting the W-M system that was popular at the time and had been refined by former Arsenal manager Herbert Chapman, Pompey enjoyed both the best defensive and attacking records in the division, the goals being shared around by a dynamic forward line. 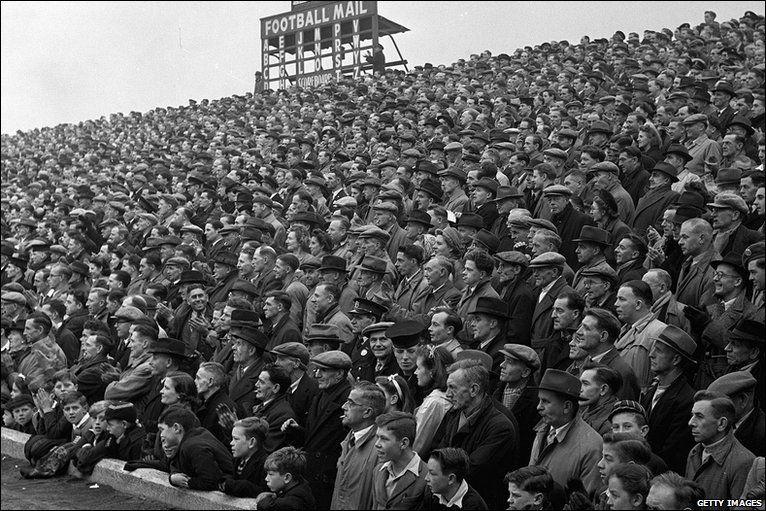 Fratton Park's record attendance stands at 51,385 (FA Cup game against Derby in 1949) and the first match under floodlights was played in 1956.