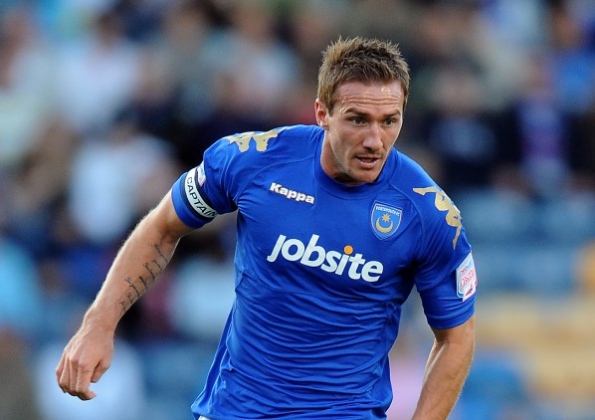 Liam Lawrence has become the latest Pompey player to leave the club on loan.

The Blues skipper has penned a deal with Cardiff City to join them on an emergency loan until the end of the season and follows Erik Huseklepp who left on similar terms for Birmingham last week.

Lawrence joined from Stoke City as part of the deal that took Marc Wilson to the Britannia Stadium in August 2010.

And only recently he outlined his desire to stay at Fratton Park.

But Pompey’s financial crisis has taken a turn for the worse and the loan fee they have recived and the fact that Lawrence has been removed from the wage bill has given them a much-needed financial boost.

Lawrence said: ‘Despite all the off-the-pitch difficulties I’ve had some fantastic times here, playing for the most amazing set of supporters in the country.

“I’ll miss everyone at Pompey, and just hope that under the leadership of Michael Appleton the boys can pull through and stay in the Championship.’

Blues administrator Trevor Birch said: “It’s very tough to lose Liam but the club is in a grave situation and we have to do everything we can to stay afloat.

‘We are receiving a loan fee from Cardiff, who are paying Liam all his wages, so it’s a deal that is going to make a significant difference to us over the coming weeks.’

Pompey have moved to clarify reports Liam Lawrence’s contract has been cancelled.

The claims emerged after the Football Association’s website carried details that the midfielder’s Blues deal was scrapped back on March 3.

Lawrence was included on a list of players under written contract whose registrations were cancelled by mutual consent last month.

However, Pompey have refuted he has left the club by mutual consent and insist he remains contracted to Fratton Park to the summer of 2013.

The confusion has come about following the requirement for Lawrence to register with the Welsh FA following his loan move to Cardiff.

That meant him de-registering with Pompey and the English FA first - although he still has a Pompey contract.

Lawrence, who has been a regular in the side of play-off contenders Cardiff, is expected back at Fratton Park at the season’s end.