JOINING POMPEY
I was really leaving Plymouth as a sacrifice because money was tight. But it very nearly never happened.

For a start there was interest from Sheffield Wednesday, who were in the top flight but struggling down the bottom. Then I went to see Ron Tindall at Pompey, but didn’t reach an agreement.

But when I returned to Devon the Plymouth manager, Ellis Stuttard, said: “What the hell are you doing back?” So in the end I came back to Pompey and eventually agreed things with Ron.

The transfer fee was £44,000, which was a lot of money in those days. But I was on £45 a week, which puts it all into perspective when you consider it. I had to no idea what other players were on.
I got off to the perfect start, scoring on my debut at Norwich in a 1-1 draw, and I was in the first team for most of my time at the club. When I came we were definitely gearing up for a promotion push, but sadly we just didn’t have the strength in depth. And in the end we started going the other way as the financial situation worsened and the dream faded.

STICKING WITH THE BLUES

I didn’t come to Fratton Park with any firm plan to spend the rest of my career there, it just turned out that way. I had some great times despite there being some very lean years. During those years there were moments when I thought I should perhaps move on for the sake of my career and there was some interest from Norwich at one time, but it never happened.

MY BEST GOAL AGAINST SUNDERLAND

There are games that will always stick out. Forcing a draw with Arsenal in the FA Cup at Fratton Park was the first really big game that I played in for the club. Then I put us ahead at Highbury in a match which we were so unlucky to lose 3-2. We should really have won it. It would have changed history as Arsenal went on to do the Double.
A few years later there was a last-gasp goal at The Valley against Charlton, again in the FA Cup, and the game was televised.

My favourite goal was one at home to Sunderland in 1975. We were having another ordinary season, but everything went right on this afternoon and we won 4-2 against the team that had pulled off a shock two years earlier by beating Leeds to win the FA Cup.
Sunderland actually came to Fratton Park having not conceded a goal for five weeks. That particular season they missed out automatic promotion by two points.
I remember we were 1-0 down at half-time, but came flying back at them. I volleyed home the third with the sweetest strike that I ever made.

To be honest I was absolutely thrilled to receive such an honour from the Pompey fans. It’s a marvellous accolade and proves that the fans must have thought I was a pretty decent player. I guess they know their football!

Norman Piper was talking to Johnny Moore. A copy of this interview first appeared in the Pompey v Bristol City matchday magazine

He was Pompey’s new pin-up boy when he signed 40 years ago this summer for £40,000 – equalling the club’s record outlay for a player.

As an England under-21 international tipped for the top, Norman Piper’s credentials were pretty alien to the Blues at the time.

It was a signing that reflected the growing ambitions of second division Pompey. But when Piper left Fratton Park eight years and five managers later, the Blues were plummeting towards division four.

While the Blues prepared for fixtures against Rochdale, Hartlepool and Halifax, Piper – now 29 – took his talent to Fort Lauderdale in the Eastern Division of the American Conference.

It was not what was expected of either club or player when he arrived in 1970. But at least Piper still left Pompey a firm favourite with the fans.

“I certainly didn’t envisage playing eight years at Fratton Park, but that’s the way it turned out,” said the former Blues midfielder, who now resides in San Diego

“When I first went to Pompey we only had about 17 players with no reserve team, so it was difficult from the start.

“I got off to the perfect start, scoring at Norwich in a 1-1 draw, and I was in the first team for most of my time at the club.

“When I arrived Pompey were definitely gearing up for a promotion push, but sadly we just didn’t have the strength in depth. There were too many fringe players having to come in which meant we never had the quality to push for the top

“And in the end we started going the other way as the financial situation worsened and the dream faded.”

There might have been a way out for Piper a couple of years into his Pompey career when Norwich launched a £100,000 bid

But at the time the Blues were in the throes of a change of ownership, with John Deacon poised to seize control of the club amid the promise of better times ahead.

But all it produced was another false dawn as Pompey – in their 75th year – continued to flirt with the bottom of the table rather than the top.

“I went to the office to speak to the chairman about the offer from Norwich,” admitted Piper. “John Bond was the Norwich manager and I think moving would probably have fulfilled my ambition of playing in the top division and furthering my international career

“But the chairman’s response was to offer me more money to stay at Pompey, so I stayed put.

“With hindsight perhaps this was the time when I should have moved on – but hindsight is a wonderful thing.

“When the club pushed my money up a considerable amount I was happy because, despite the struggles on the field, I loved the area and was settled

“The trouble is that at the time players were very much left to make their own decisions with no proper advice. You didn’t have agents to look after your interests and advise you on the best move for you personally.

“So I stayed put and when all the big-money buys came in I think everyone thought we would progress. But we never did because I still think we lacked depth

“But when I look back now I have no regrets. I played a game I loved at a high standard and enjoyed every moment of my time at Pompey.”

A last-minute equaliser in the fourth round against Charlton at The Valley in 1976 and the opener at Highbury in a 3-2 replay defeat to eventual double-winners Arsenal five years earlier are fondly remembered.

Piper, however, has his own personal favourite sandwiched between those two

“When we’re talking about goals, one still stands out above all the others that I scored for Pompey,” he recalled.

“It was a volley against Sunderland, who had won the FA Cup two seasons before and had not conceded a goal in their previous five games

“We’d gone 1-0 down to them at Fratton Park in the first half but came out on fire in the second and blitzed them with four goals.

“I scored the third of those with a volley that I caught just right and it was a really satisfying goal – and performance.

“I can remember George Ley getting the other one at Highbury, but we lost to a very late and debateable penalty.

“I’ve seen the one at Charlton on ‘YouTube’ quite a bit, so still have a very vivid memory of it to this day

“Phil Roberts crossed the ball, George Graham headed it down and I managed to hit it home on the half-volley.

“After the euphoria of getting the equaliser we then massively let ourselves down in the replay at Fratton Park in front of more than 30,000 fans

“We’d beaten first division Birmingham over two games in the previous round and to bring Charlton back to our place created some real cup fever.

“I told him that if we didn’t change the back four then we’d get beaten – and it was still goalless at this stage.

“We were playing with Chris Lawler as a sweeper but Ian came back with: ‘You’re not doing so well yourself are you?

“In the second half three crosses produced three goals for Charlton and we were out. Ian St John didn’t speak to me for about two weeks afterwards.”

Pompey finished the season bottom of the second division, starting their fall towards the Football League’s basement

Piper was eventually moved from his usual midfield slot into defence – a switch that many saw as a step backwards in more ways than one.

But it was a move that failed to faze Piper.

“I started off at left-back under Malcolm Allison at Plymouth,” he explained. “So I was very comfortable playing there.

“But I was always comfortable wherever I played because the important thing for me was just being out on the pitch.

“There was never any dispute if the manager said: ‘Norman, can you play there today?’ I always said I would because I could adapt to it.

As Pompey dived towards the bottom tier of English football, Piper took off for a new life across the Atlantic.

Even though stars such as George Best and Pele were plying their trade in the United States, the public appeal of the game was still limited

“Again, with hindsight, I perhaps went over too early,” said Piper. “But when my Pompey career had ended under Frank Burrows I thought that was it.

“I was only 29, which for most players now is the prime of their career, so perhaps I should have stayed around longer

“But I thoroughly enjoyed my time in the game and still have close links with Plymouth and Pompey. I think of both of them with affection from afar.”

From Wikipedia, the free encyclopedia

Norman Piper was an English footballer (soccer player) who played professionally in England for 13 years before finishing his career in the United States. 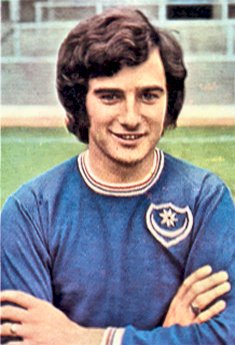 Piper was one of that generation who bridged the gap between terminological eras, beginning his career as a wing-half and ending it as a midfielder despite playing a similar role throughout. Born in North Tawton, Devon on 8 January 1948 he joined Plymouth Argyle as an apprentice and signed professional terms in February 1965.

Already an England Youth international, Piper made his debut for the Under 23 side in 1970 against Bulgaria, the year he left The Pilgrims- for whom he scored 35 goals in 221 appearances.

That summer Piper had signed for Portsmouth, becoming their record signing at £50,000. Piper served Pompey with great distinction during the clubs increasingly tenuous hold on Division Two status, but eventually lost form after relegation to the third. He was dropped in February 1978, interestingly being replaced by his namesake Steve Piper.

His contract, along with that of Bobby Stokes was terminated the following month and a move to the Fort Lauderdale Strikers soon followed. In 1979, Piper was the first player signed by the expansion Wichita Wings of Major Indoor Soccer League. He played for the Wings until 1982 when he was sent to the Pittsburgh Spirit.

Following his retirement from playing, he became and assistant coach with the Wichita Wings. He was fired on 30 January 1988. In 1989, he was hired to coach the Wichita Blue in the Heartland Soccer League. In 1990, the Blue moved to the Lone Star Soccer Alliance. He was fired mid-season. He now is a coach for a small travel soccer team in Southern California known as Carlsbad Lightning