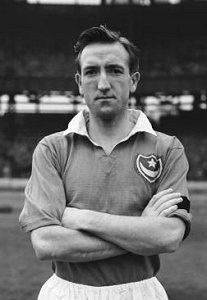 Local boy Peter Harris is Pompey's most successful marksman whose tremendous goalscoring record will probably never be beaten. The flying winger scored 208 goals for Pompey in 516 games in all competitions.
But he is not only a hero in terms of goals. He was a Fratton stalwart who won the respect and admiration of many football supporters with his loyalty, dedication and durability in serving his local club for 14 solid years. With 479 appearances, he is the third longest serving player in Pompey history, behind Jimmy Dickinson and Alan Knight. Born in Portsea, Harris joined Pompey just before the end of the second world war.

He was a wing forward with an astonishing turn of speed, prodigious pace and a stunning weight of shot. He developed impeccable ball control and accuracy in shooting which made him one of the most prolific goalscorers of the immediate post-war era; remarkable considering he was a winger. Rated by many in the same class as Stanley Matthews and Tom Finney, he became the undisputed owner of the number seven shirt from 1947 to 1959 until a serious chest illness brought his career to a premature end.

During Pompey's two championship seasons, Peter netted 33 goals and ended top scorer at Fratton Park in a further five different seasons. His first hat-trick came at The Dell during the war and his first peace-time triple came against Stockport County in the FA Cup in a 7-0 win in 1949. He scored five more hat-tricks throughout his career together with four against Sheffield United in 1954 and all five in a 5-2 win over Aston Villa in one of Peter's last games, aged 32, in 1958.

Yet ironically, Peter was capped only twice by England; first against Eire in 1949 at Goodison Park, one of Peter's favourite grounds, and then four years later in Budapest as England crashed 7-1 to the Hungarians. Peter, who retired to Hayling Island, is still fondly remembered by today's older generation of Pompey fans for his flying runs down the wing. Most record books state that Peter Harris scored 194 league goals for Pompey. The true figure is 193 because one goal at Newcastle in November 1953 that Peter originally claimed, was actually an own goal.

The durable, diamond-bright brilliance of the right-winger Peter Harris offered persuasive contradiction to glib descriptions of the Portsmouth side which lifted back-to-back Football League championships midway through the 20th century as "the team without a star". Though denied more than fleeting moments in the international limelight by the incomparable talents of Stanley Matthews and Tom Finney, the placid, modest Harris was a massive achiever for his only club.

A cursory examination of his statistics reveals him to be Pompey's record scorer, having netted 208 times in more than 500 senior outings during a 15-year career. Those are remarkable figures for any flankman, but they barely begin to do justice to his overall impact in a beautifully co-ordinated team which was damned all too frequently by faint praise.

Harris was a monument to flair, loyalty and dedication, but what commanded the attention most insistently was his searing pace. He was particularly devastating in sudden bursts of acceleration, a natural gift, but one which he honed meticulously by his prodigious application to training.

After seeming to dawdle harmlessly near the touchline, Harris would erupt explosively, his characteristic high-velocity scurry capable of embarrassing the classiest of opponents. Indeed, few men were better equipped to combat speed merchants than the celebrated Manchester United and England left-back Roger Byrne, who lost his life in the Munich air disaster of 1958, but even he was the subject of serial chasings by the Fratton Park flyer.

Of course, Harris would not have flourished so productively by sprinting power alone. He possessed immense guile, as evidenced by the subtle feints and dummies with which he tormented defenders, his ball control was immaculate, and he was a reliable purveyor of tantalising crosses. Crucially, too, he was a fine finisher, packing a shot both powerful and accurate.

Born a short bus ride from the Portsmouth headquarters, Harris trained as a carpenter and played his early football for a local club, Gosport Borough, before being signed by the colourful Fratton Park boss Jack Tinn towards the end of the Second World War.

The slim teenager, who favoured long, baggy shorts in the style of his hero, the great Arsenal schemer Alex James, got off to an impressive start in unofficial wartime competition, then made his senior début in a 3-1 home victory over Blackburn Rovers in August 1946.

During the following campaign, he established a regular place under the quietly inspirational leadership of the new manager Bob Jackson, then emerged as a key component of the Pompey combination which romped away with the 1948/49 title, outstripping the runners-up Manchester United by an emphatic five-point margin.

Harris's 17 goals made him joint leading scorer with Duggie "Thunderboots" Reid, the pair being supplied with ammunition by fellow members of an underrated team whose plentiful ability was buttressed by extraordinary degrees of comradeship and co-ordination. Outstanding among them were the wing-halves Jimmy Scoular and Jimmy Dickinson, left-winger Jack Froggatt, inside-forward Len Phillips, and Reg Flewin, centre-half and a skipper of imposing authority.

At one point in the spring, Portsmouth had a genuine chance of becoming the first club in the 20th century to lift the League and FA Cup double. Harris had set their Wembley sights with a hat-trick in the 7-0 third-round thrashing of Stockport County, but after reaching the semi-finals they fell rather tamely to Leicester City, then toiling in the lower reaches of the Second Division.

Pundits who trumpeted the causes of more fashionable clubs from London and the North predicted that Pompey would falter in 1949/50, but they confounded the doubters by retaining their First Division crown, this time pipping Wolverhampton Wanderers by two-fifths of a goal (at that time a difficult goal-average system was used to split teams on equal points, rather than goal-difference).

Thereafter Portsmouth remained an effective side for several seasons, though they became more unpredictable and gradually the title-winning line-up was dismantled as the 1950s progressed. Harris, however, remained on prime form throughout that decade and, had he not shared nationality with Matthews and Finney, surely must have received more than his international two caps.

Sadly, both his England appearances coincided with dreadful team displays. At Goodison Park in 1949, England were defeated for the first time on home soil by a foreign country, and in Budapest in 1954, given the task of avenging the previous year's Wembley humiliation by "The Magnificent Magyars", they were annihilated 7-1 by Hungary.

On the domestic scene, Harris enjoyed his most fruitful scoring term in 1952/53, striking 23 goals, and in 1958/59 he became the first winger to net five times in a top-division game when he dominated the 5-2 triumph over Aston Villa. By then, though, Portsmouth had deteriorated horribly and at season's end they were nine points adrift of their nearest rivals, being relegated for the first time since the war. However, the 33-year-old Harris featured only briefly in the Second Division, succumbing to tuberculosis in November 1959 and never playing again.

On recovery after six months in a sanatorium, he turned down several offers to remain in the game and managed a restaurant complex in Hayling Island, as well as engaging in local charity work.

Published in the News on Wednesday 22 August 2012

IT’S what Peter would have wanted.

Those are the heartfelt words of the widow of Pompey hero Peter Harris after she pledged her backing to the Pompey Supporters’ Trust.

Sylvia Harris, who was married to the legendary winger for 48 years before he died in January 2003 aged 77, popped her cheque in the post amid hopes the fans’ group can take over.

Mrs Harris, 80, who lives on Hayling Island, says she will do all she can to try to save the club.

She said: ‘Peter was a one-club man.

‘He had 15 years with Pompey and was very loyal.

‘If he were here, the first thing he would do would be to put his hand in his pocket and do anything to try and save the club.

‘Thank goodness he is not here to see the state they are in at the moment.’

Mrs Harris said she was given the idea to pledge towards the trust’s takeover bid by friend Harry Kempster.

She recalls that Mr Kempster, in his younger years, was admitted to hospital and asked a doctor what the Pompey score was after rousing from surgery.

News of his post-treatment request made its way to Fratton Park and led to a visit from Peter and fellow Pompey icon Duggie Reid.

‘Harry said some time ago that the club was struggling and asked if there was anything I could do,’ added Mrs Harris.

‘I think Peter would have been pleased with anything that could be done to keep the club going.

‘I had a lovely letter from Milan Mandaric saying I was welcome at Fratton Park any time.

‘But I just couldn’t force myself to go and watch the players come out of the tunnel knowing Peter wasn’t one of them.

‘It would be tremendous if the trust take over.

‘This might just spur people to say they loved watching Peter play as a player, and if he wanted to do it, let’s do it.’

Trust spokesman Colin Farmery said: ‘This is a fantastic gesture by Sylvia and the trust is extremely grateful.

‘It just goes to show how deep the roots of the Pompey family go.

‘The word legend is used too lightly but Peter was certainly a Pompey legend and Sylvia’s gesture is a fantastic one that we hope will encourage people to pledge because ultimately that’s what’s going to help the club.