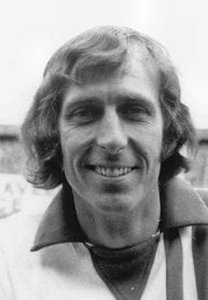 From the Official SIte

It is rare to find a natural goalscorer on your doorstep but Pompey found their ideal man just a short motorcycle ride away.

So when the call came from his hometown club, Ray Hiron hitched a lift on his mate's bike from the Portsmouth Dockyard where he worked, never to return.

Born in Gosport and playing his football for non-league Fareham, Hiron was the ideal find for the Blues in 1964.

Taking up the story, the man still remarkably similar to the one who left Fratton Park 35 years ago said: "Pompey watched me at Fareham a few times, so they knew what I was capable of."

"Then I played in the Victory Shield final for Fareham at Fratton Park and scored a hat-trick - I think that just about convinced them."

"I got the phone call the next day and I came down from the dockyard by motorbike and accepted the offer straight away."

119 goals over the next 11 years was the tally of a steady rather than prolific striker but it was a record that failed to tell the whole story.

For most of his Fratton Park stay, Hiron played as a lone striker in a series of struggling sides.

And long before Peter Crouch was born, a player whose height and physique closely resemble the England forward was causing similar headaches for opposing defenders.

“He gets constantly picked up by referees for the use of elbows,” said Hiron, who was inducted into Pompey’s Hall of Fame in 2009. “I was the same, although it was more part and parcel of the game in my time.

“I used to get away with it a lot more and with some of the defenders you came up against, you needed to be able to look after yourself.  “I remember at Hull Terry Neill whacked me on the knee after about 10 minutes, so I told him my time would come.

“Later a long ball came in and I caught him on the nose and then straight away went down myself.
“Our physio Gordon Neave came on and asked where I was hurting. I said: ‘Nowhere – I’ve just done him.’

“That was the game in those days. You took the knocks, gave them back and looked after yourself.

“Every week you faced tough defenders and I remember going to Coventry and suffering a dead leg but, though I was in agony, the manager George Smith made me go out there. “Their big defender George Curtis got me straight in the bad leg and I was literally limping through the game.

“Nevertheless, I got an easy side-foot goal at the end. But the only praise I got from our manager was: ‘There you are, I told you there was nothing bloody wrong with you.’ That was the game in those days and that was George Smith.”

Those totals look particularly impressive when you consider that Pompey finished 15th and 17th in Division Two those years.

The tally of 17 in 1968/69 was boosted by an amazing run of seven goals in the last three games – four of them coming in a 5-2 victory over Norwich in the last home game of the season.

But Hiron particularly remembers his first and 100th goals at Fratton Park – both diving headers.
“I didn’t score many of those,” he recalled. “So it was ironic that was how I scored the first and 100th.

“The first came against Leyton Orient. It was scored at the Milton end and it was naturally a great feeling.

“The 100th against Nottingham Forest came at the Fratton end. Ken Foggo crossed the ball and I just went diving in – it was a real achievement when the ball hit the net.

“I never really celebrated my goals but I ran all the way back to the centre circle with my arms in the air. I’ve seen a picture of it somewhere recently.

“In the season I hit 17 we had bought a striker called Bill Brown from Gillingham and he definitely helped me in the games he played because he was a partner. “I rarely had one at Pompey because I often played the role of lone striker. I noticed a big difference when he was in the side and it gave me a freedom I had not often known.
“But when I came back the next summer we had sold him to Brentford, so it was back to mainly playing up front on my own.”

Like many former pros, Hiron rues the divide between players and supporters that has slowly crept into the game at its highest level.   He said: “We got brought up with going to functions at the old Pompey Supporters’ Club and that came from the manager.

“George Smith was a very strong-minded manager and you did what he said but this was not a hard thing to do in this circumstance because it was enjoyable.  “I remember we had a darts team who would play against the supporters and there were all sorts of other things like talent shows and concerts.

“The supporters have not really changed. They were as great in my day as they are now.”