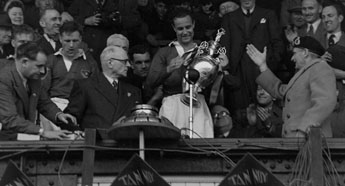 Pompey Captain Reg Flewin receives the Championship Trophy on April 29th 1949 with Field Marshall Montgomery looking on. One of many great photos featured in the book 'Portsmouth: Champions of England 1948-49 & 1949-50' by Colin Farmery (feature here).

A posthumous award was made for Reg Flewin, who captained Pompey’s back-to-back top-flight title-winning sides of 1949 and 1950.

Portsmouth-born Flewin made his Blues debut as an 18-year-old in 1939, but the outbreak of the second world war meant the centre-half had to wait more than seven years to make his next start.
A Royal Marines heavyweight boxing champion, Flewin took over as Pompey captain early in the 1946/47 season, becoming a key part of the side that would become the finest in the country.

Flewin’s award was presented to family member Andrea Hawkins by club stalwart Barry Harris.
Piper, who flew over from his home in the United States to be honoured, was a fixture in Pompey’s side between 1970 and 1978.

obituary in the Independent

Although the image of Portsmouth footballers cavorting around Wembley brandishing the FA Cup remains fresh in the memory following last month's Wembley triumph over Cardiff City, it is difficult in this commercial age of the game's domination by a handful of big-city giants to picture a time when Fratton Park was home to the side that was, unequivocally, the finest in the land.

Yet so it was for two successive seasons in the middle of the 20th century when Pompey were champions of England, a temporary stranglehold on the premier domestic prize for which the south coast club's central defender and captain, Reg Flewin, could claim immense credit. Not that he was prone to do so. Flewin was an unassuming fellow, an appropriate leader indeed for a collection of players renowned – and sometimes underestimated – as "the team without a star".

A tall, commanding figure, uncompromisingly physical when the occasion demanded, but capable also of unexpected delicacy with the ball at his feet, he operated as a stopper between two vividly contrasting wing-halves. To his right was the fire and brimstone of the volatile Scot Jimmy Scoular, to his left the style and composure of the England regular Jimmy Dickinson; together the trio made up one of the most balanced and effective half-back lines to be seen in British football since the Second World War.

Flewin could count himself unfortunate not to join his club comrades in the full international ranks, but when he was in his late-1940s prime the silkily skilful Neil Franklin of Stoke City held sway with the England selectors, and the Pompey man's representative honours were limited to appearances in two unofficial wartime encounters with Wales, then berths on FA tours to Canada and Australia.

As a schoolboy, the Portsmouth-born Flewin divided his enthusiasm between football and boxing, and he showed immense promise in the ring, training under the demanding eye of the redoubtable Stoker Reynolds, a professional welterweight revered in local fight circles. But it was at the team game that he excelled, and after representing Portsmouth Boys, he joined Ryde Sports, an Isle of Wight club used as a nursery by Portsmouth, for whom he left a job with the Danish Bacon Company to sign professional forms on his 17th birthday in November 1937.

At the time Pompey were struggling in the lower reaches of the old First Division – the equivalent of today's Premier League – and with their regular stopper Tom Rowe reaching the veteran stage, there were high hopes that the promising youngster would prove a long-term replacement. Duly he made his senior début in a 2-1 victory over Grimsby Town at Fratton Park in April 1939, but remained on the Wembley sidelines as unfancied Portsmouth upset the form-book by beating Wolverhampton Wanderers in that season's FA Cup final.

Still, Flewin was poised for imminent promotion, only for his ambitions to be frustrated by the outbreak of the Second World War, during which he served with the Royal Marines. However, he turned out regularly for Portsmouth in various regional competitions during the conflict and when peace resumed, the 26-year-old was confirmed as the team's regular centre-half, soon also taking on the role of skipper.

Immediately, Flewin emerged as the principal defensive bulwark of the side, his canny reading of the unfolding action, his steadiness under fire and, particularly, his aerial prowess – with his long neck he cut a distinctive figure as he soared into combat with opposing attackers – combining to make him a favourite of the Fratton Park faithful.

In 1946/47 Pompey consolidated by finishing in 12th place in the top tier, but it was not until Jack Tinn was replaced as manager by Bob Jackson at season's end that the pieces of an exceptional unit began to fall into place. There was an improvement to eighth place in the following term, but it was not until 1948/49 that Portsmouth really hit their stride, coasting away from Matt Busby's Manchester United to become League champions by five points – a swingeing margin in the days of only two points for a win.

The goal-scoring wingmen Peter Harris and Jack Froggatt shared the bulk of the bouquets with Scoular and Dickinson, but Flewin's calm authority was appreciated in high places, too, notably by the club president, Viscount Montgomery of Alamein, who wrote to the captain in rousing terms halfway through that triumphant campaign.

Some critics caught on the hop by Portsmouth's success, most of them based in London and the North, played down the achievement, hinting that it had been a fluke and predicting a return to the status quo of big-club supremacy in 1949/50. They were confounded, however, as Jackson's superlatively well organised combination took the title again, this time on goal average – the aburdly complicated forerunner of goal difference – ahead of Wolves.

This time around Flewin played fewer games, principally because of an appendix operation, but still he remained a key influence. However, that would change over the next two seasons when he fell prey to injuries and Froggatt switched from the left flank to take his place in the centre of defence.

During this unsettled period he rejected an approach from local rivals Southampton to become their manager, but after making the last of his 167 League and FA Cup appearances for his home-town club, as a 32-year-old in early 1953, he stepped up his interest in coaching, first taking charge of the Fratton Park youth scheme, then becoming assistant to Eddie Lever, Jackson's successor as boss.

Flewin remained Portsmouth's number two until October 1960 and then, finding himself baffled by some decisions of yet another new manager, Freddie Cox, he accepted the reins of Fourth Division Stockport County. There followed three years of toil at Edgeley Park, enlivened by a run to the fourth round of the FA Cup in 1961, before he returned south to take over at Third Division Bournemouth in September 1963.

He led the Cherries to a fourth-place finish in his first term at Dean Court, narrowly missing promotion to the second tier, but he resigned due to eye problems in 1965. Later, there was brief service with non-League Hastings before he entered into partnership in a holiday camp venture on the Isle of Wight.